Phytoestrogens and Your Testosterone Levels

When it comes to eating for hormone balance, there are a few things you’ll want to avoid at all costs.

When it comes to the gentler sex, how much do you really know? You might assume you’re an expert, but to really know her you must understand estrogen in all its splendor. While estrogen may give her all those curves that drive you crazy, as a man, you want to keep those estrogen levels under tight control.

But there lurks a danger; one which does not originate from within, but from the foods we eat, many times coming from various fruits and vegetables. Does this mean you should stop eating these delicious morsels nature has given us? Absolutely not. What is does mean is that you need to be educated on what to eat, and what not to eat when it comes to phytoestrogens.

Simply put, phytoestrogens are plant compounds which closely resemble the natural female hormone estradiol, and are able to elicit a similar effect.

There is one common misconception about phytoestrogens that need to be debunked before we go on: not all phytoestrogens are bad. Some share similarities with pharmaceutical compounds known as SERMs (selective estrogen receptor modulators, such as Clomid), and are able to act like estrogen at receptor sites, while others are able to bind to it and block subsequent estrogen from interacting with that receptor (known as an anti-estrogenic effect).

What this means for you as a man is that some phytoestrogens may actually be beneficial in keeping your androgenic/estrogenic ratio favorable, while others may cause unwanted estrogenic effects.

The ones you will want to consume are, of course, the ones that are able to bind at the estrogen receptor and effectively block it, so that the body’s natural estrogens are unable to act. Likewise, you will want to avoid estrogenic phytoestrogens like the plague, as they can directly suppress testosterone and promote estrogen-related side effects.

Stay Away From These Phytoestrogen Sources: Soy

No list of phytoestrogens would be complete without starting off by naming the granddaddy of them all, the infamous soybean. Soy can be found as an additive in many places you wouldn’t even be able to guess (such as mayonnaise), as well as in your favorite drinks, protein shakes, and even milk. Why is soy found in everything?

Because it’s cheap! But it is also a potent androgen disruptor, and according to results of a study, men who consumed the largest amount of soy tend to have the lowest sperm counts.1 Sperm count is tied intimately with androgen levels, meaning that you should also expect to see lowered testosterone levels.

Stay Away From These Phytoestrogen Sources: Flaxseed

Flaxseed has demonstrated itself as a good source of omega-3 fatty acids, which are even more important if you’re a vegetarian. However, all omega-3 fatty acids are not the same. The variety found in flaxseed comes in the form of ALA, alpha linoleic acid, which needs further conversion to become usable in the body. This is a problem, as only a small subset of the population actually has the genetics to efficiently convert ALA, and even then, at a rate of maybe 5-15%. Not a lot to go on, even if you are lucky.

If that’s not enough to advise you against wasting your hard-earned cash on flaxseed, consider the fact that it has been shown in some cases to have estrogenic potential exceeding that of soy.2 And that’s not all. Flaxseed’s estrogenic potency is just the tip of the iceberg. Far more consequential to males is the fact that another study found daily supplementation of flax for just 4 months yielded a massive reduction in free and total serum testosterone levels of 90% and 70% respectively.3 This is as close as you can get to castration from just eating.

When it comes to flax, the message is clear; stay away if you’re a man!

Stay Away From These Phytoestrogen Sources: Mint

Before you go bonkers and throw out every mint-based product in your house, let’s get some perspective here; we’re referring to consumed mint. So yes, while you will likely absorb some from your toothpaste and mouthwash, oral hygiene should remain high on your to-do list!

While there is evidence from two studies, one performed on rodents4 and the other on women,5 both arrived at the same conclusion: Mint lowered testosterone levels, and had anti-androgenic properties. Though the studies were conducted on spearmint, since many members of the mint family share similar properties, it is likely that the effects of other types, such as peppermint or sweet mint would be the same.

Stay Away From These Phytoestrogen Sources: Beer

How could this manliest of beverages possibly possess anti-manly potential?6 Many believe that beer is as manly a beverage as you can possibly get, but that’s dead wrong. Even the legendary Arnold Schwarzenegger, whose training advice is gold, was wrong about beer in the famous bodybuilding movie Pumping Iron.

Centuries ago, the Vikings drank a similar beverage called mead, made of honey and herbs. In fact, the only necessary ingredients needed to make beer are water, sugar, and yeast. However, this is not how modern-day beer is made. It is made with hops, which should be considered a tragic ingredient choice of gargantuan proportions.

Ever considered what a beer belly really is? It is more than just excess caloric intake causing a bit of extra fat. In fact, it is positively attributed to the estrogenic effect of hops,7 which promote belly fat accumulation, increased testosterone aromatization, and subsequent gynecomastia (man-boobs), if you aren’t careful.

The Good Guys for Your Androgens: Pomegranate

Pomegranate is the stand-out hero among the oceans of villainous estrogenic foods, as found in numerous studies. For one, there were findings that by drinking pomegranate juice daily for just two weeks, subjects increased their salivary testosterone levels by an average 24%. Another study even found that compounds in pomegranate juice were able to inhibit the aromatase enzyme,8 enabling more testosterone to do its job and avoiding conversion to estrogen.

The Good Guys for Your Androgens: Cruciferous Veggies

These include veggies such as broccoli, cauliflower, cabbage, kale, and spinach, and should be part of every man’s diet. Among the best reasons for consuming them is the presence of a compound named DIM (or 3’3 diindonylmethane), which promotes estrogen removal in the body via the liver.

Additionally, many of these veggies are rich in plant sterols,9 which while not anti-estrogenic by themselves, are able to influence a favorable estrogen receptor type distribution. 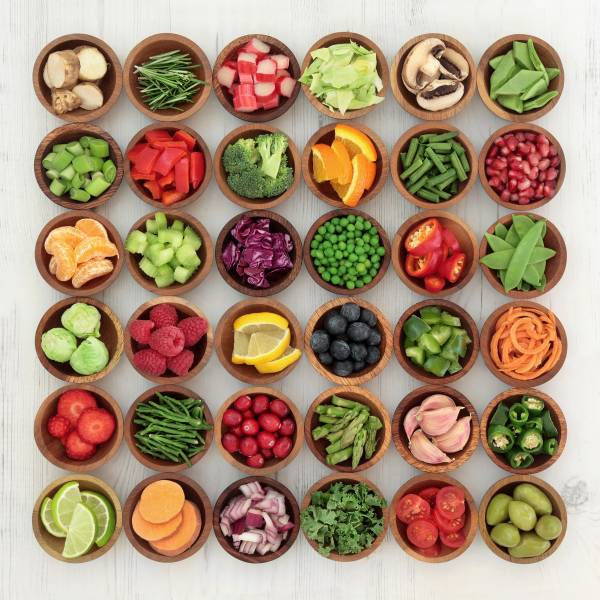 The Good Guys for Your Androgens: Grapes

Grapes make the list largely due to the fact they contain high levels of resveratrol. Resveratrol is a polyphenol compound documented to have anti-estrogenic effects,10 along with testosterone-boosting and aromatase-inhibiting properties. This makes grapes especially favorable to all aspects of men’s health and sexuality.

Alas, you can take some solace in a few glasses of red wine per week, since beer is now public enemy number one!

While eating the right foods with the good phytoestrogens you want can be a great start, sometimes it’s not always enough, especially if you are already in a state of estrogen dominance. Should that be the case, it may be a good idea to invest in a natural estrogen blocking supplement, just to get your hormonal profile back to where it should be. Then, consume the right foods to prevent shifting the balance once more, and you should be good!

What else can you eat to help your hormones?