These agility paddles have an intriguing design and many unique advantages, including being strapless. These are one of the best paddles on the market and a great value.

Whether you are a swimmer or not, you have surely heard or seen hand paddles for swimming. There are many reasons hand paddles are used. They are traditionally used to increase the surface area of the catch in order to increase resistance of the pull, which promotes “feeling” for the water. Today everyone from the recreational to the professional swimmer uses the hand paddle. And over time hand paddles themselves have evolved, particularly if their use was more specific than just increasing the resistance of the pull.

In my years as a swimmer I have used hand paddles in pull-only sets, but in more recent years also as a tool to perfect strokes, by isolating different phases of the stroke in stroke-specific drills. By design the majority of paddles have been a piece of square, perforated plastic with elastic straps to hold them to your hand. This is one of the main differences with the FINIS Agility Paddles, which in turn give them many other unique advantages, they are strapless. 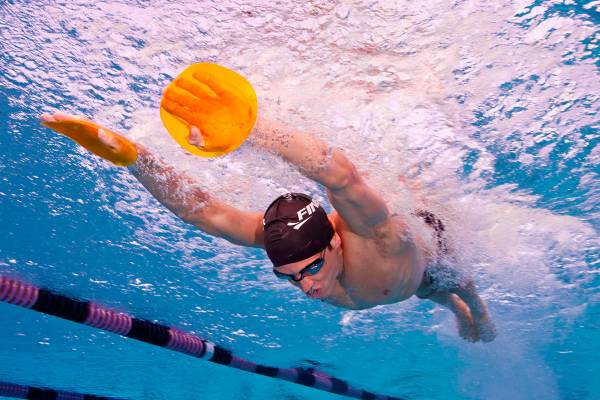 When I looked at the Agility Paddles, my first thought was, “Oh dear, there is no way I can swim and keep this thing in my hand.” I was thinking as a swimmer, one who has done things a specific way, with bad habits that are hard to break. So, I decided to present the paddles to one of my younger swimmers. The fear on her face was priceless, and this made me think the Agility Paddles may be on to something good.

The design of this paddle is nothing short of genius, and it has in fact received the reddot design award. Contrary to traditional paddles, the Agility Paddle is a convex plastic paddle that in addition to lacking straps also accommodates the hand by a lateral thumbhole. The ergonomic shape promotes correct placement of the hand. (Although “old dog” here has found a way to palm the paddle and circumvent some of the benefits of the design. My advice, go large in size.)

So, why was my swimmer in such fear of this paddle? Because in order to keep the paddle in place without falling, you must maintain perfect technique throughout the swim. Perfect technique isn’t bad, quite the contrary, but in a young swimmer’s eyes perfect technique equals hard work. This paddle leaves no room for mistakes. The palm positive paddle will only remain in place if early vertical forearm position is maintained (commonly referred to by coaches as “high elbow catch”) making it a golden tool for coaches to teach good technique. In my twisted mind, this can also be used as a perfect “punishment” for swimmers who fail or quickly become lazy (I am guilty of this) and compromise technique. 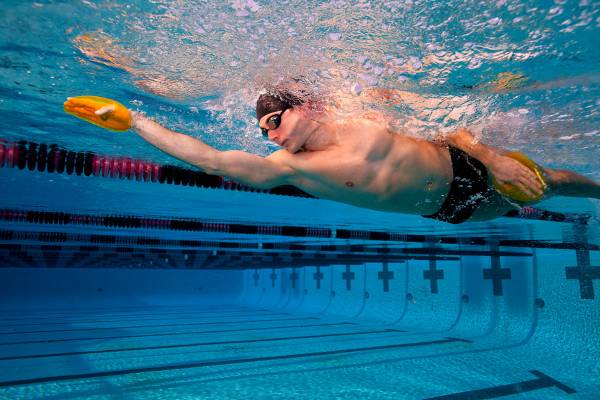 The strapless design also comes with a few small advantages from both the swimmer and coach perspective. There is no longer the need to “strangle” fingers and the wrist in order to keep the paddle in place, and no need for constant tightening. From a coach’s perspective the excuse of having to constantly tighten and adjust the paddle is no longer valid. There are also no straps to break and replace during a set. This feature makes the paddles a lot more durable than their traditional counterparts.

While the paddle is marketed for use with all four strokes, I personally found the most benefit for freestyle. When I tried to breaststroke with them I had a very hard time holding on to them during the recovery portion of the stroke.

And while for most this won’t be an issue, for younger swimmers who like to set themselves apart from their peers it might matter that the paddles are only available in yellow. We saw FINIS introduce different colored snorkels that colored swim teams across the country, so perhaps the color palette of this paddle will increase in the future, increasing the appeal to the younger generations.

All in all the Agility Paddles are a great technical tool for coaches and swimmers, promoting correct stroke using a comfortable, ergonomic design. It is without a doubt one of the most, if not the most, superior paddles on the market and great value for money.

FINIS Agility Paddles are available for $19.99 at FINISinc.com.