Kinesiology taping first began as a way to promote healing from injury, but has since evolved to become a performance enhancing technique.

You have probably seen more and more athletes working out or performing while wearing athletic tape in various patterns all over their bodies. Known as kinesiology taping or kinesio taping it is unlike athletic taping of the past. Kinesiology taping first began as a way to promote healing from injury, but has since evolved to become a performance enhancing technique.

Greg van den Dries first became fascinated by this taping method when he was recovering from his own leg injury. Through research he learned the many uses of the tape. The tape itself, however, was hard to get ahold of unless you were certified through a manufacturer. Greg decided to remedy this situation by founding his own company, RockTape and innovating his own method of taping, PowerTaping.

How Can Tape Help?

You are probably asking yourself the same question most people ask – how can tape help your performance? According to RockTape, there are a few reasons.

Sensorimotor (proprioceptive) system – As explained in the PowerTaping manual, “It is a system of receptors (in this case cutaneous/skin receptors) that communicate with the brain about the body’s position. If we can tap into that system and heighten the aware of our body in space, we can enhance performance.” Essentially the tactile nature of the tape makes your body hyper aware of its own location and movements. 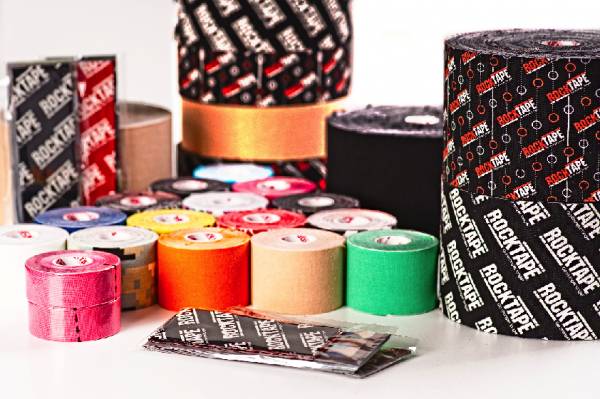 Inflammation control – RockTape lifts skin away from the underlying fascia, which holds blood and lymph vessels and nerves. This extra space relieves fluid congestion, reduces inflammation and pain, and allows for increased blood flow and therefore accelerated healing. By keeping inflammation at bay, pain receptors are not activated and this also allows for enhancements in performance.

Kinetic chain – PowerTaping was developed based on the concept of muscles acting as parts in a chain. It uses the “all one fascia” concept explained by Thomas W. Myers in his book Anatomy Trains. Essentially what this means is you are taping the movement pattern, not an isolated body part. One beneficial aspect of this method of taping is the “snap back” phenomenon. This means the elastic recoil of the RockTape assists in bringing muscles back to their original position efficiently when a movement is completing. This results in an increase in performance.

PowerTaping has application for all levels of athletes, as it can be used in five main areas:

I highly recommend if you purchase RockTape to also purchase the PowerTaping manual as it goes into great detail on how to tape for all five purposes and even contains special sections on activities like taping for natural running. The website, www.rocktape.com, also has instructional videos available. 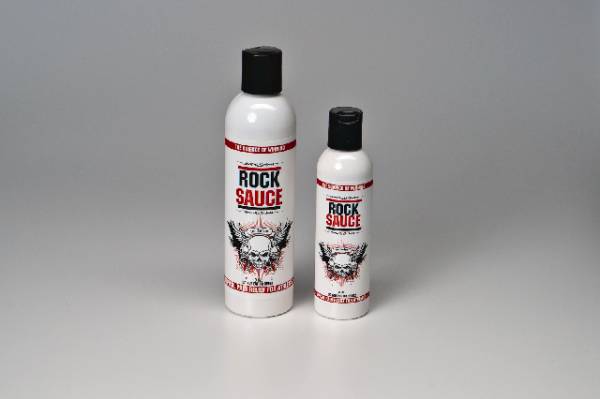 In addition to RockTape there is also Rock Sauce. A topical pain reliever, Rock Sauce combines the cooling effects of menthol with the heating effect of methyl salicylate. It contains large percentages of both ingredients in comparison to other pain relievers on the market and you will definitely feel it when you apply it to your body. Rock Sauce claims to reduce inflammation and sooth sore muscles.

Based on the advice given to me by RockTape founder Greg van den Dries, I used a combination of Rock Sauce and RockTape on my lower back before a workout. The workout involved clean and jerks, which can be taxing on the back. I also taped a chronic shoulder injury. It is helpful to have a second person to assist you with taping, as some body parts can be hard to position and tape correctly at the same time.

Once I began exercising, I found my lower back warmed up more quickly and was far less tight after the workout than is typical. I also experienced less post-workout achiness in my shoulder. During the workout I completely forgot I was wearing the tape, it melded so seamlessly to my body. It did not inhibit my movements in any way.

The Rock Sauce, as a topical painkiller, also worked well. It is very strong, so be mindful of administering it yourself if you are in a small, closed space (like a bathroom). It made my eyes water! Once it was on my back and shoulder, though, it felt fantastic and the smell faded quickly. I did not receive a single comment from anyone all evening in regards to the medicine smell, so it was a better experience than I have had in the past with topical painkillers. For best benefit, Greg recommended putting the Sauce on the site before taping, making sure to wipe it clean before applying the tape, and then dotting the tape with additional Sauce that will soak through.

RockTape, Rock Sauce and the PowerTaping manual are all available for $20.00 and up at shop.rocktape.com.