Big news! I received my purple belt from Phil and Ricky Migliarese on October 11th!

A few weeks ago, I found out that I was on the Balance promotion list for my purple belt. I was pretty excited when I heard the news, but I was also nervous, for a lot of reasons. First, I knew I had to go through some sort of test, but I didn’t know exactly what the test would entail, so that made me pretty anxious. Second, I had become comfortable at blue belt, and I was afraid everything would change at purple.

None of that mattered, though. If my instructors said I was ready, then it had to be true. The jitters eventually went away and I realized I was going to be a freaking purple belt!

On promotion day, I was nervous. My body must have thought I was competing, because I had what I like to call “tournament tummy.” There had to be about a hundred people in the room. Most of them had gis on, but a few gi-less people were there to watch, support, or take photos. The number of people in attendance was crazy, but I think I did a good job of staying focused.

Phil Migliarese, owner of Balance Studios, called the blue belt candidates out first. They lined up on the mat, and then the brown and black belts went out to roll with them. Watching them go first eased my mind a little bit. It gave me time to relax before my turn. 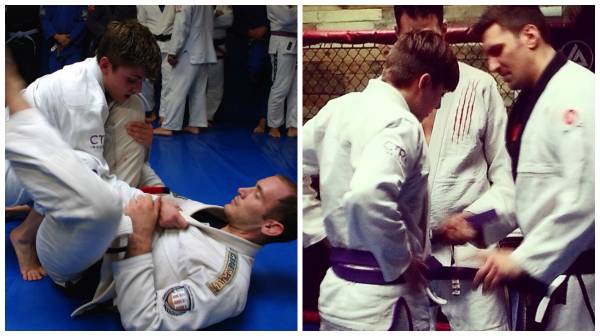 After about ten rounds, the blue belt candidates were finished. Then it was time for the purple and brown belt candidates to step out and take our turn. The first person to roll with me was Aldo, who is a black belt. I’ve rolled with him in the past and he usually took it easy on me, but in this instance he really took it to me. Everyone did. I didn’t have one easy round. We didn’t even have rest time in between rounds. It was one person after another, taking their turn at kicking my butt. Every single person I rolled with made sure I worked hard for that purple belt. It was challenging, but absolutely worth it.

After all the candidates had their chance at rolling, it was time for the belt ceremony. Five people from Scranton MMA were promoted that day. Matt Marcinek, Steve Peragallo, and I received our purple belts. Frank Alogna received his brown belt. And Dominic Passaniti received his black belt. Everyone worked their butts off that day, and we all ended up with some pretty big promotions. It was definitely an important day in Scranton MMA history.

Now that I am a purple belt, I must say it doesn’t feel much different than blue belt. I didn’t gain any super powers or suddenly know more about jiu jitsu than before. The only difference that I’ve noticed is that I feel like the real deal now. As a purple belt, I feel like I have an even bigger responsibility to promote jiu jitsu.

I went through a lot of ups and downs as a blue belt. Thankfully, the ups outweighed the downs. This past year alone has been amazing, and I can’t wait to see what’s in store for me another year from now. I’m blessed to be at the best school in northeast Pennsylvania, working with the best instructors in the region. Scranton MMA is my home, and everyone there is my family. I’m excited to keep the positive vibes going for many more years to come. Here’s to being a purple belt!