Psychology of a Weightlifter: Dealing With Excessive Anxiety

Maybe you hit all your lifts in the gym, but when you get on the platform at the meet everything seems to go wrong. Why is this and what can you do to overcome this performance anxiety?

We all have seen “Johnny Gymlifter” at some point. He is often very talented and loves to try the big ones in the training room, even though he is often weeks away from a contest and way out of sync with his own periodized training plan. PRs occur with ease early in the cycle. People are sure Johnny will clean up in the Podunkville Open. Comes the Open though, as soon as someone is watching our boy and the stakes are set, then Johnny runs into his familiar jinx and then he goes only two for six, settling for the bronze.

How is it that some lifters are destined to do their best in competition (“money lifters”) where it counts while others look fantastic in the confines of the gym and then fall apart on the day of the meet? Are you a gym lifter? If so, why?

Much of this is due to a thing called “affective stability” that I talked about a few weeks back when I reviewed the psychological requirements for success in weightlifting (actually most sports). Put into the pop vernacular, affective stability is the ability to keep one’s cool in the face of threatening situations. This is a very valuable ability to have. All champions seem to have it. But without it many things can go wrong.

What are some of those things that can go wrong when one’s cool is lost? Well, there are a number of them we will discuss over the next few weeks. But the one I will look at first is excessive anxiety.

Just what is anxiety and how does it arise? Anxiety can be defined as a fear of negative evaluation. That evaluation may come from the coach, teammates, crowd, or others. The worst evaluator a lifter can face may be his or her own self. Those ego-driven lifters (show me one who isn’t) face the toughest critics. These lifters may see themselves as unbeatable local champions, strong beyond all others, or whatever. But unless they are also Olympic champions, they know someone exists who can out-lift them. And perhaps another lifter at today’s competition is the one who will do it. They start thinking: “If he wins, just how good am I really? Maybe I’m not that good. I wonder if the next lift will feel heavy. What if I miss?”

And it doesn’t end in the mind either. Mind and muscle are intimately connected. We love to tell the media and others this line, while I suspect many of us don’t really believe it. But it is true. Our Nervous Nelly in the warm-up room demonstrates this aplenty if we look closely. Muscle tension rises, heart rate quickens, respiration speeds up, and overall physical operation starts closing down. 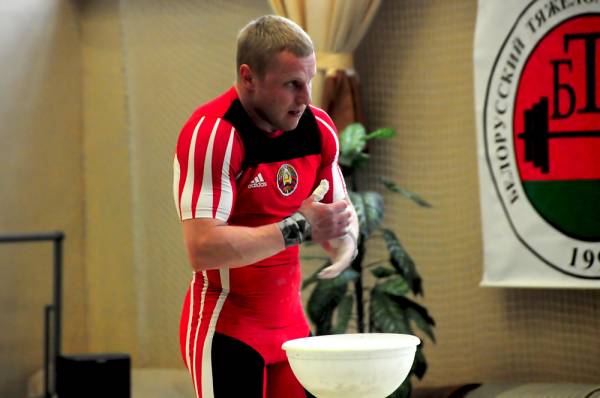 All is not bad however. When one is anxious attention span will usually narrow. This can be good if it helps keep out any negative thoughts. But this is a gate that swings both ways. It can also be an invitation for negativity to enter. Intrusive thoughts appear that are difficult to chase out of the head. These often focus on what can go wrong. The bar is too thick, too smooth, or not “whippy” enough.

Johnny starts to worry about what all can go wrong. As he comes unraveled it becomes increasingly hard to take a balanced look at his situation. Instead of calmly assessing the situation and determining what is fine and what is going wrong, our Jumpy Johnny often starts to catastrophize the situation. Worse will come to worse. In that case he thinks nothing is going right and blames everything related to the source of his anxiety.

The legs feel rubbery when in the first pull. This causes doubt to be felt so the second pull will not have been built on a solid foundation. Alternatively he may tighten the tonus in all his muscles and thus lose his ability to quickly change direction as he lifts. Technique thus becomes very tentative. Hesitation or too-soon activation of muscles and limbs is common in this scenario.

A focus on the avoidance of mistakes takes over. This can take the form of not pulling or driving as hard as required. It’s as if the lifter does not want to antagonize the already unfriendly bar. The reward will be a missed attempt, as the weight does not rise as far as it should to make a lift. The will to fight, especially under a heavy clean or a jerk also abandons the fearful lifter. That brings us back to the mind-body connection again, doesn’t it?

How can this type of anxiety be countered? This question is especially difficult since much of this type of apprehensiveness is constitutionally based. Those with more labile nervous systems will naturally experience these effects more easily. Those that don’t have these problems are often born with the ability. 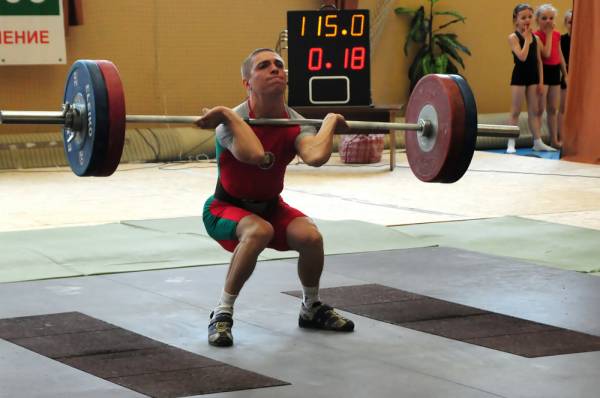 The best way to fight this is to compete often and also to do 95% and heavier lifts often. Familiarity will eventually breed contempt of the bar, not fear of it. Many coaches will say to save the big lifts for when they count, in a meet, but many lifters compete only four or five times a year. Normally this is okay, but lifters like Johnny should compete more often to get over the fear of competition. Lift in a number of unimportant meets where a miss will not be the end of the world. Just get over the fear of the weights and also the audience. This is just another desensitization exercise, a common treatment for anxiety disorders.

Develop the technique as well as possible by constant practice with heavy weights, since technique is often something that these lifters worry about. Concomitant to this it will also help to learn how to miss with a weight if one hasn’t learned this already. Fear of getting into a dangerous position hampers many lifters. Greg Everett and Art Drechsler describe this technique well in their books. Just as wrestlers must learn how to take a fall, so must lifters learn how to jump clear of an earthward bar. Both can result in a pinning combination you don’t want.

Finally, don’t forget to work on the flexibility. The fear of getting turned inside out on a snatch or wrist jammed on a clean is at the root of many tight lifter fears. A loose body means one less possibility to worry about.

While the constitutionally anxious lifters like Johnny Gym-lifter will always have more mental training to do, there is no reason for him not to become a much better “money-lifter” with judicious practice.