I want to share with you how I got my start in fitness, how I visited the world of bodybuilding, and how calisthenics help me discover the abilities of my body. Get lean and strong with no equipment.

The following in an excerpt from Al Kavadlo’s book “Pushing the Limits”:

As a kid, I was a huge pro wrestling fan. There is just something magical about watching larger-than-life musclemen kick the crap out of each other (or at least pretend to in a way that’s convincing enough for a child to accept). As a result, I idolized guys like Hulk Hogan, “Macho Man” Randy Savage, and “Mr. Perfect” Curt Hennig. Even once I figured out that pro wrestling was staged, I still admired these men for their strength, power and charisma. Of course I wanted to be just like them!

When I was around eleven years old, we made a deal that I would be allowed to start lifting weights when I turned thirteen. In fact, my parents even agreed to buy me a weight set, a bench, and a pull-up bar for my thirteenth birthday. Since I had older brothers, we already had a rusty old barbell and a couple of dumbbells lying around in the basement that had been passed down from one of my uncles. I’m don’t remember them really getting much use, though. Besides, I wanted to get my own set of weights! I knew very little about strength training at the time, and like most people I was convinced that a skinny kid like me would need to lift weights in order to get big and strong.

Strong? Not so much.

I waited for my thirteenth birthday with great anticipation. I probably nagged my mom about the weights every day for the next two years. She didn’t budge though. I had to wait it out for what seemed like an eternity. At the time I hated it, but in retrospect making me wait was one of the best things my mother ever did for me.

I went through a growth spurt when I was twelve and by the time I turned thirteen I was already my full height of 5’11’’ – but I barely weighed 130 pounds! It was finally time to put some muscle on this frame. (At least we didn’t have to worry about working out stunting my growth anymore.)

Since I was really into the idea of getting huge and muscular like my wrestling idols, over the years I dedicated myself to bodybuilding and tried every (legal) supplement I could find in an attempt to make that happen. Though weight training was a lot of fun, I never got quite as jacked as those guys. No matter how much I tried and how many supplements I ate, it never seemed enough. Years later, when I decided to pursue a career as a personal trainer, I was concerned that my lack of mass would hurt my chances. After all, most of the trainers I saw at gyms back then were a lot bigger and stronger looking than I was. 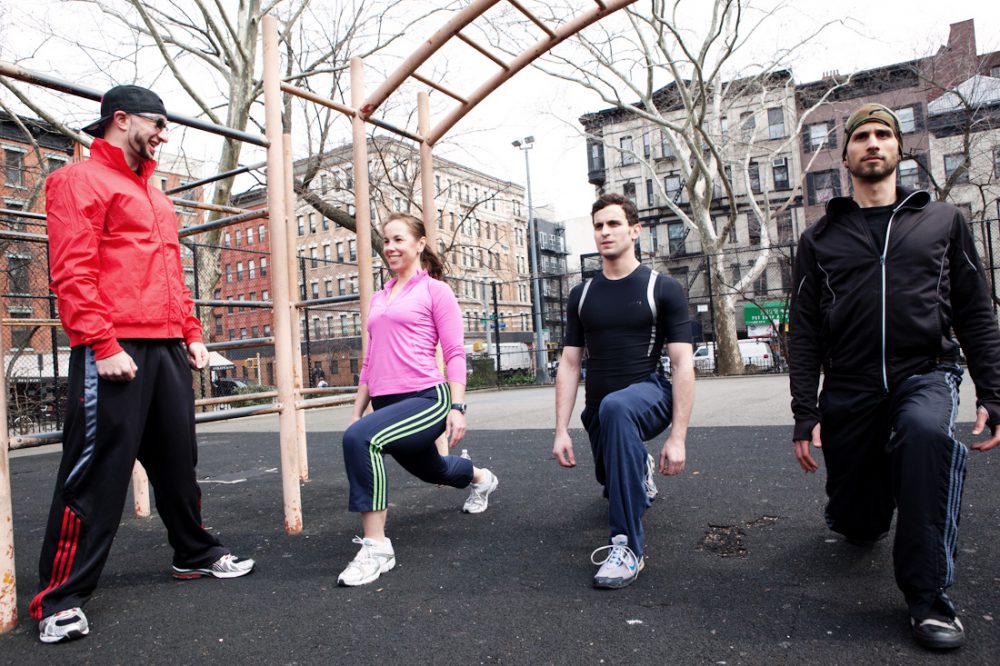 Turns out I wound up doing pretty good as a trainer in spite of not being as huge as the Macho Man. In fact, a few years into my career, I abandoned the idea of building mass altogether, instead choosing to focus on having fun with my training. By that time I had bulked up to 190 pounds but I didn’t feel as good as I thought I would. Bodybuilding made me stiff and slow. I could leg press almost half a ton but couldn’t do a back bridge, a handstand push-up or even run a respectable mile. I always had stomach aches from drinking protein powder and eating excessively in an attempt to build mass. Eventually my objectives changed from lifting heavy and getting as huge as possible to feeling good, enjoying life and performing better. I’ve found that pursuing bodyweight training allows me to do those things more than bodybuilding-style weight training ever did.

Different people naturally have different body types. While nobody can gain muscle without some effort, some people can put on bulk easier than others. As much as I desperately wanted to get as big as possible when I was younger, I was fighting my body type. Though I didn’t want to accept this truth in my formative years, genetics is an undeniable factor in how our bodies look. Just like I can’t do much to change having been born with brown eyes, I’ve also always had small wrists, narrow hips and narrow shoulders. These bony reference marks are good ways of measuring a person’s frame. Frame size and body fat percentage are two very different things, however. You can’t just look at the size of someone’s body, as most people are carrying more fat than you might realize.

If you are having a hard time finding your wrist bones, shoulder blades and/or hip bones, it means you are carrying a lot of excess body fat. Someone can have a large frame but still be lean while another person with a small frame may still be fat (Arnold Schwarzenegger and Danny DeVito in Twins come to mind).

If you want to test the size of your frame, locate any of those areas and give a good hard squeeze. Try to grab as much of your flesh as you can. If you get a hold of anything more than a few centimeters thick, it isn’t part of your frame – it’s fat!

People who practice calisthenics come in all different shapes and sizes; some are big and some are small. The one thing that all the advanced practitioners have in common, however, is that they are all relatively lean. Calisthenics is about building strength relative to your size. Performing bodyweight exercises will gradually shape your body to its most functionally efficient natural state by building muscle and shedding fat to accommodate the specific demands of the training. 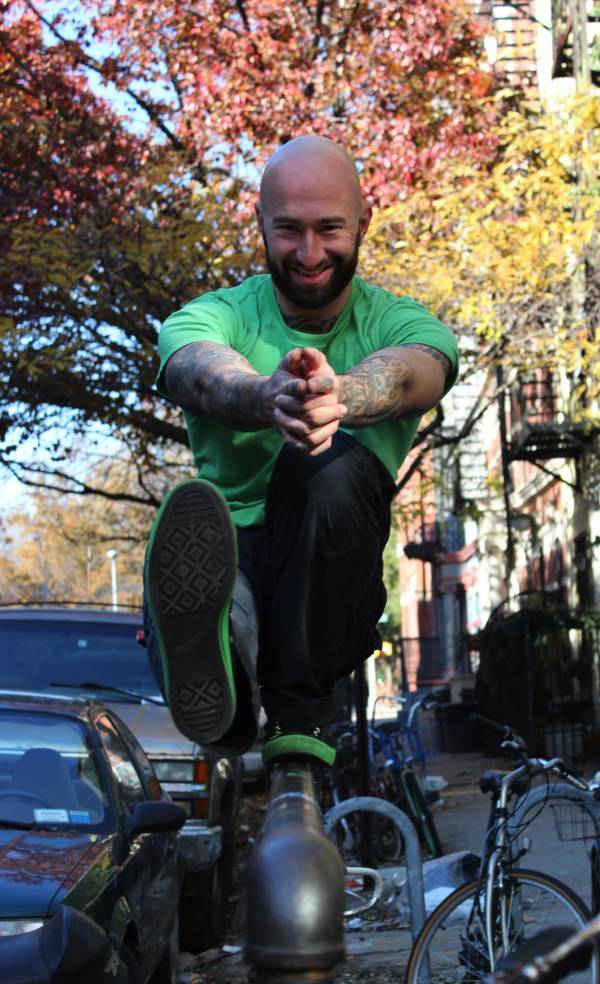 Because I have a lanky frame, I’m still fairly small and light for how much muscle I am carrying. Obviously the thirteen-year-old me was way too skinny for his frame at 130 lbs. but the 190-pound me at age 25 was too big! Now at age 33, I am a lean, mean 160 lbs. I’m pound-for-pound stronger than I’ve ever been and I feel the best that I ever have.

People are sometimes surprised to find out how light I am. I meet lots of athletic guys with less muscle than I have who still outweigh me by ten or twenty pounds. The reason I am light in spite of having a lot of muscle is that I have practically no fat on my little frame! Many people are carrying a lot more excess weight than they realize. A man who is my height doesn’t need to weigh anywhere near 200 pounds to look strong and muscular.

Beginners and intermediates can experience muscle growth from calisthenics training, but at a certain point the body will level off size-wise. There is only so far that you can go naturally where aesthetics are concerned, however strength gains can continue indefinitely. Since a large part of strength actually happens in your brain, there is seemingly no limit to how strong one can become. Your muscles can only get so big, but the brain has an amazing way of learning and reinforcing movement patterns that goes beyond the physical playing field, and into the neurological. Strength isn’t all about muscles – it’s about knowing how to use your muscles.

Besides, if you could continue to keep getting bigger forever from bodyweight training, I’d finally be the size of Hulk Hogan by now!

Ironically, many of the wrestlers I looked up to as a kid wound up with serious health problems (or worse) as they got older. By eating clean, staying supplement free and training for fun and functionality, I’m hoping to avoid those pitfalls.

If you’ve spent much time in a commercial gym, you’ve probably noticed most of the people in the strength training areas using weights and/or machines to try to work each body part separately from the others. Though performing isolation movements is a cornerstone of bodybuilding training, in calisthenics the opposite approach is more effective.

I want you to use every muscle in your body for every rep of every exercise.

Sure, a push-up places more emphasis on the upper-body, while squats are more of a leg workout, but the rest of the body must support what those muscles are doing. There is no such thing as a true isolation exercise. If you’re going to work towards a one arm push-up or pistol squat, you need to understand the concept of total body tension from the get go. It is the key to performing advanced calisthenics with power, grace and control. I want to help you bring awareness to how your muscles are interconnected and use them together to be as efficient as possible in your movement.

There are a lot of misconceptions about women and strength training. For starters, a lot of women are unnecessarily concerned about gaining mass, but without testosterone supplementation, it is very unlikely to happen. The women you see in bodybuilding magazines have worked very hard to achieve that aesthetic – they want to look that way! It’s a bit insulting to all their hard work when weak, chubby women say things like “I can’t do squats or my legs will get huge!” 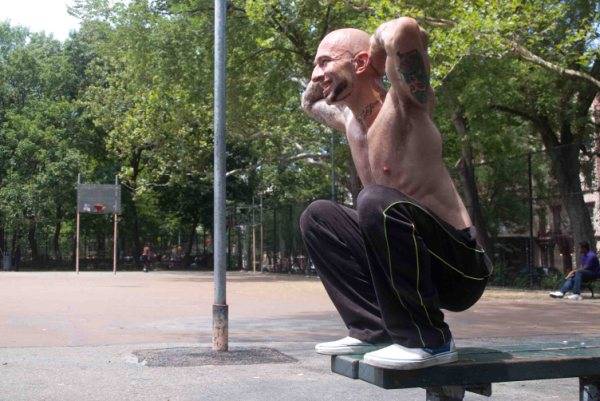 In reality, push-ups and squats are the two best exercises for strengthening and toning the parts of the body my female clients tend to be most concerned with: the backs of the arms, the thighs, and of course, the butt. Women who consistently practice calisthenics usually wind up with lean, toned physiques – not huge, rippling muscles like bodybuilders.

In my last book, Raising The Bar: The Definitive Guide to Pull-up Bar Calisthenics, I broke down pretty much everything there is to do using my favorite piece of workout equipment, the pull-up bar. In this one [Pushing the Limits], I’ll show you all the essential moves for strength training with no equipment at all. All you need to start building strength right now is the floor you are standing on. And if you don’t have any floor, well, then you’ve got much bigger problems!

In Raising The Bar, I told you there are basically only three exercises to do on the bar and everything else is just a combination or variation of those moves. Though there are more than three types of exercises to do on the floor, I’ve chosen to focus this book on the three that I deem most essential: push-ups, squats, and inversions. While you can build a strong, aesthetically appealing body with just these exercises, the ultimate bodyweight strength training program combines elements from both books.

Don’t get me wrong, you will work every muscle in your body by following the advice in this book; the lats and biceps work as stabilizer muscles during push-ups (especially one arm push-ups) and all of your back muscles do a considerable amount of work during bridges. Heck, you can even get your lats firing during pistol squats if you focus on keeping your chest upright, but there’s simply no substitute for pull-ups.

Now that we’ve got that out of the way, let’s start Pushing The Limits!

Curious about the rest of the book? Read our book review.

“Pushing the Limits” is available for $39.95 at DragonDoor.com.