In my long struggle with back, neck, and shoulder pain, I’ve tried many self-massage products. The RAD Roller is the best.

I remember the first time I tried using a lacrosse ball to massage my back. I felt as though I had discovered gold. Finally, I had found a tool that could get deep enough into the muscles in my back to provide some relief.

My History of Back Pain

At the time, I was dealing with a lot of back pain, which has continued on and off ever since. Sometimes the pain is due to an old, worn-out bed I’ve been forced to sleep on during travel, or sometimes it’s from rolling with a larger teammate in an intense roll with a bit too much pressure. Other times it is caused by sitting in an uncomfortable chair for too long. The pain extends from my SI joint to the base of my skull.

I’ve always had a foam roller, but I never found it got into those muscles surrounding my spine deep enough to give relief. It was useless for my neck. Perhaps I’m not heavy enough, or perhaps I wasn’t rolling correctly. Rolling on the wall with a lacrosse ball was a lot better, but it still wasn’t perfect. The pressure was too deep to use on the floor and the ball was hard to keep in place.

A New Discovery: The RAD Roller

I searched in the stores for a small device that could work both sides of the spine at once, but couldn’t find anything. An online search resulted in the discovery of the RAD Roller.This self-myofascial release tool looks like two lacrosse balls fused together, but it isn’t as hard as a lacrosse ball. The pressure of the tool is spread over a wider area as well, so it is still effective, but less intense.

The site description explains a bit more about the design. “The RAD Roller is, quite literally, designed around the spine, and is now being used by people of all walks of life to create relaxation and relief in nearly every muscle of the body.” It is made of 100% rubber in three different intensities: stiff, original, and soft. I was sent all three to review. Since they’ve arrived, I’ve had a RAD roller with me everywhere I go. I have one at work, one in my BJJ gear bag, and one in the gym backpack I keep in the trunk of my car.

Since I began using the RAD Roller regularly, I haven’t had to miss any class time due to shoulder, neck, or back pain. When I get to Titans MMA, I roll out my neck, traps, shoulders, and pecs on the wall, then roll my abdominals and back out on the floor with the stiff roller.

Initially, I had planned on only using the RAD Roller for my spine, but a few weeks ago began to feel pain in my rotator cuff. I wrote about this issue in my review of the Bauerfeind OmoTrain shoulder support. When I felt the pain coming back, I was worried that I’d have to pull the brace out again.

That night in my hotel room, I focused the RAD Roller around my shoulders, traps, and neck and the pain disappeared. It came back again a week later, but I rolled it out the same way and added that area to my pre-training routine. I haven’t had issues since.

When my back feels sore during training, I roll it out again at the end of class and that’s usually enough to solve the problem. I should say that I have also avoided sleeping in beds that could cause trouble when I travel by sleeping in wheelchair accessible rooms (when they aren’t needed by people with special needs). These rooms aren’t used as much, and therefore have beds that are less worn out. In addition, when BJJ rolls are hard on my back, I slow it down and try to just flow until the end of the roll. 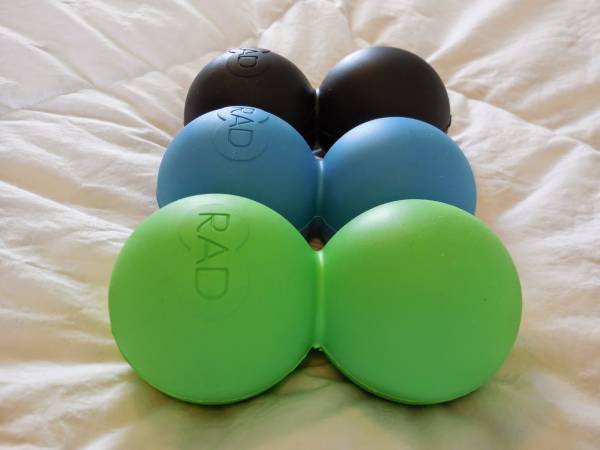 Another benefit to rolling out on the RAD roller is releasing toxins. Lymph and waste materials get trapped in the muscles and joints sometimes and once you roll them out, you can feel that same sensation of release that you get when you’ve had a good, long stretch.

Because the roller is so small, some of my teammates had issues with it getting caught up in their clothing while they rolled. I had the same issue when I wore looser clothing, so I made sure to roll when I was wearing tighter clothing or used it at home in a sports bra.

Although I focused on my upper body during my review, the RAD Roller was designed for use on all parts of the body. The site offers a PDF with instructions for elbows, hips, IT bands, calves, feet, and anything else that is causing problems. While they don’t claim to be able to cure any conditions, the RAD Roller was “designed by experts to closely replicate the touch of a trained massage therapist anytime and anywhere.” I can attest to the effectiveness of their design, and I hope it can help you, too.

The RAD Roller is available for $24.99 at RadRoller.com.