This holiday recipe is three wonderful things: it tastes fabulous, it’s simple to make, and it’s made from wholesome ingredients. You can’t miss with this pumpkin, pecan, cranberry concoction.

Six years ago, I was on my way to becoming a professional vegan baker. I baked a few hours a day perfecting recipes and at the time, nothing brought me joy like creating something beautiful from simple, albeit processed ingredients. It felt so homey and back-to-basics. I had discovered a talent for something that brought people happiness and nothing seemed to please people more than bringing them pretty, homemade sugary things. I always felt so proud to bake my girls’ birthday cakes from scratch or have them brag that my baked goods creamed anything store-bought for school functions.

But one day, after all the endless testing and tasting, my stomach, my mood, and my husband’s waistline couldn’t take it any longer. The idea of frosting suddenly made my lip curl. The excess sugar had taken its toll on me emotionally and physically. My baking career had sugar crashed before it fully began.

I still love the aesthetic beauty of a bakery and a shiny case full of pretty cakes and fresh fruit pies. It still feels homey and comforting to me even if I don’t eat it any more. I often just miss the creative outlet that baking gave me. 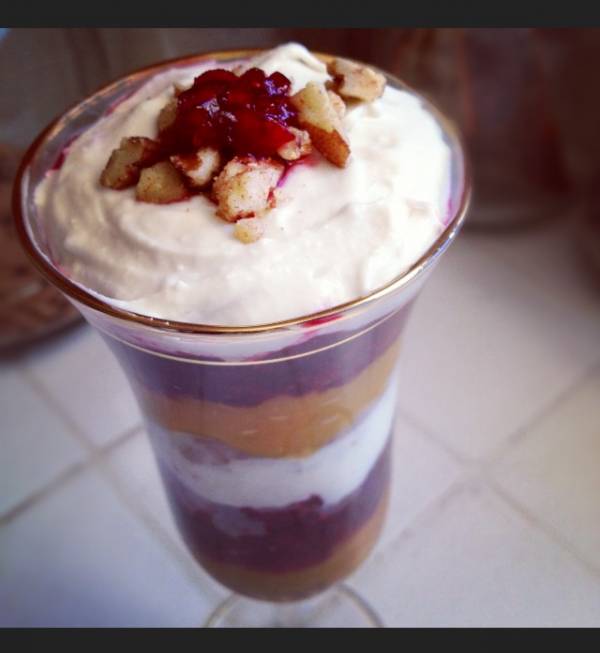 Every so often, especially around the holidays, I try to recreate magic in the kitchen, but now I use raw foods or whole foods. I don’t eat refined sugar now, and I’ve experimented with quite a few natural sweeteners. Everybody responds differently to sweeteners, whole-food based or not. For example, I feel perfectly fine eating some raw agave, but pure maple syrup gives me a sugar high and crash very similar to refined sugar. I do well with dates, too, but I know some people do not. Below I offer a holiday/fall recipe for a pumpkin parfait that was inspired by raw chef Susan Powers. I used coconut nectar, but agave or pure maple syrup can easily and more conveniently be used.

I’ve made this for a small, fall dinner party and for a holiday gathering. Nothing captures the season like the flavors of pumpkin, cinnamon, and cranberries. The kick of the ginger adds a great dimension. The layers of the parfait are pretty enough to satisfy my creative side and my guests hoping for a delicious, fancy dessert without traditional sugar.

Place all these ingredients in a food processor and process, scrape down the sides as needed. Once processed, put puree in a bowl or container and set aside.

Place cashews and water in a blender. Blend until smooth. Add melted coconut oil, ginger, sweetener, and sea salt. Blend until well incorporated. Pour into bowl or container and chill until set, about an hour

Place ingredients in food processor and pulse a few times. The cranberries should be a little chunky

Finely chop or process pecans in a food processor with a few pulses and mix with the cinnamon. Set aside in a bowl or container 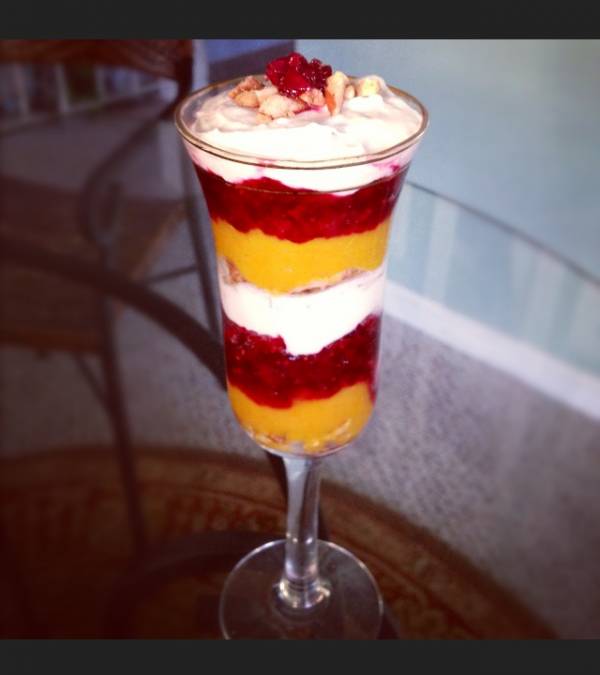 For the cleanest assembly, it’s best to use a separate spoon for each ingredient. In a flute, or a parfait glass, place a layer of pecans, then a layer of pumpkin, then cranberries, and then the ginger cream. Repeat and top with a few pecans. Let chill for about an hour. Serve!

It is still possible to create beautiful things with simple and pure ingredients. And even though I sometimes miss baking, my overall health welcomes the switch, especially when I make desserts as delicious as these parfaits.

I can’t wait to read other holiday recipes in the next few weeks. If you have a holiday recipe to share you could win one of three amazing paleo cookbooks in our November Photo Contest. If you just want to see some amazing recipes, be sure to check out our Pinterest gallery.