The 2015 International Weightlifting Federation World Championships are now history. Those who were there saw some fantastic performances that seem otherworldly to us garage gym rats struggling to make our first 300lb clean and jerk. We may even wonder if our efforts count for anything next to such elite athletes. Now that everyone is back in their home gyms, it is time for some deeper analysis.

To guide my analysis in this article, I will concentrate on the recent history of the sport of weightlifting, keeping in mind the words of French novelist Jean-Baptiste Alphonse Karr: “plus ça change, plus c’est la même chose.” The more things change, the more they stay the same.

A Generation After the Iron Curtain

It has now been over twenty years since the fall of the Soviet Union. That’s nearly an entire generation. None of the great Soviet and other Eastern Bloc stars who were active before the fall of the Berlin Wall are still active. All are now retired, and many new stars were not born until after the cataclysmic events that took place over two decades ago.

When the Soviet Union did break up, I can remember it was a subject of great interest in the weightlifting world. We all wondered if the great Soviet lifting machine would survive or not. One of the reasons the USSR collapsed was due to basically going broke, so many figured there would be no more money for frivolities like weightlifting. Others were not so sure. Since weightlifting is a relatively cheap sport, some predicted that Slavic lifting supremacy just might continue.

An entire generation of weightlifters are now competing who never knew the era of Soviet dominance.

Twenty years later, the latter situation seems most accurate. In recent years, some people have pointed out that Russia is not winning the number of gold medals it used to, asserting that the Chinese and others are stealing a march on them. This is certainly true, but it seems that the Russians are now on the move again after a long period of semi-dormancy.

For example, if you combine the men’s and women’s points earned in the world championships, Russia has indeed come out on top, just like they did in years past. They benefited greatly from three bail outs from the Chinese men. Had the latter half totaled, the competition would have been very close.

The naysayers also missed one major point. They apparently neglected their political geography classes back in school. The Soviet Union was not just Russia – it was comprised of fifteen different republics, all of which are now at least nominally independent. All of those countries have continued their weightlifting traditions, and those are traditions of winning.

Many of the top twenty athletes are from nations that were once Soviet republics. That got me thinking. If you look down the placings, you will see that there are still a lot of good lifters in the other republics. What if they all still competed as a single team? (Remember the so-called Unified Team of the 1992 Barcelona Olympics?)

To that end, I took the following steps to analyze the results of the world championships:

The chart below shows you what the result would have been. Columns labeled “official” show how the combined men’s and women’s points added up. Those under “unofficial” are my revised point lists. 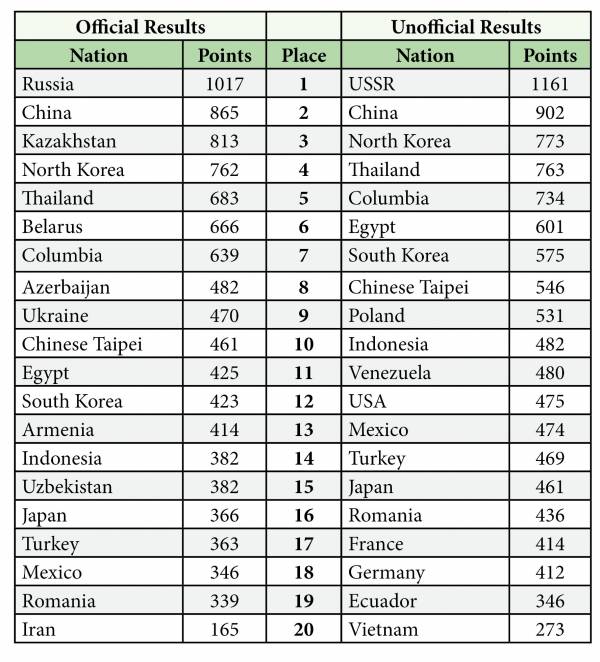 What if the Iron Curtain had never fallen? The results reveal some surprising changes.

Upon examining the above, we see some very interesting changes. In the official results, of the top twenty nations, seven are from the former Soviet Union. But if these nations were still combined, the USSR would finish at the top.

This is not surprising, since Russia was already on the top in the official results. Adding some top lifters from their former republics only strengthens them. But it hasn’t always been this way. Russia went through a long weightlifting recession and left several Olympics with no gold medal winners. However, the other republics have managed to maintain their strength during those years. This means Eastern Europe still has some of the best lifters in the world.

Trends in Other Countries

This brings up another observation: more countries are entering more women than ever before. I will be investigating this trend more in my next article. For now, we can say that much of this is due to the fact that many see women’s weightlifting as a route to relatively easier victories. This is true even for countries whose women normally don’t enjoy much freedom. 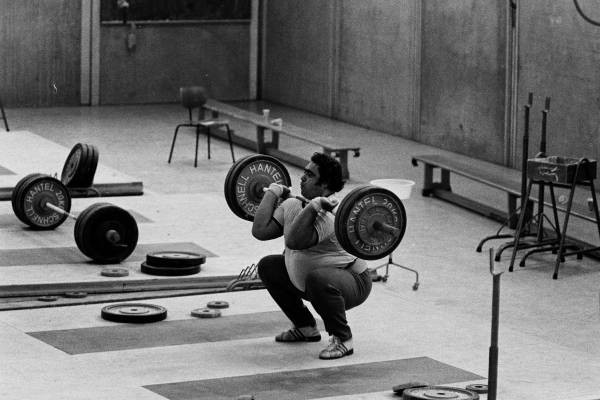 The courses of the great weightlifting nations of the world have implications for every athlete.

This analysis shows weightlifting supremacy is not permanent, and neither is weightlifting obscurity. Success does not depend on your nationality, ethnicity, economics, or political leanings. Those countries that have made a determined effort to produce champion lifters are eventually rewarded if they put enough resources to the project.

We see this time and again. A poor country like North Korea can still produce fantastic lifters, while those of us in the West are having problems. True, with our greater resources we have different values and therefore spend our money in different places, but it still shows what might be possible. The amount of money spent on weightlifting in some of these poor countries would be a rounding error on the United States national budget.

You may wonder how this all relates to you. You are not even close to world championship caliber, and if you’re really honest, you never will be. What can you take away from this article?

The main takeaway is that your status in the sport is not fixed by any number of external variables. Just as Vietnam transformed from a war-torn, decimated country to a rising power in weightlifting, your average Jim Hacker can think of his body in the same way. With well-planned training and a lot of perseverance, that scrawny young kid or soft-bodied older man or woman you see in the gym can become a contender in his or her own world.

We all can’t be medal winners, but nobody who has trained seriously has ever gotten weaker from doing so. And that lesson applies to your sense of identity and self-efficaciousness, as well as your physical strength.