A newbie might expect to see blinding speed and perfect technique at Worlds. But that is not always the case.

The 2015 Senior World Weightlifting Championships are now history. A record 584 lifters from at least 75 countries traveled to Houston in late November. In addition to the usual world bragging rights, athletes were also fighting to maximize their nation’s team size for the 2016 Olympics in Rio de Janeiro, Brazil.

A newbie might come to this competition with a number of preconceived notions. He or she might expect to see blinding speed and perfect technique. This is only natural if all you have seen are local competitions. But these notions are in need of investigation and revision.

What sets world class weightlifters apart is their strength, not speed or technique.

Let’s start with speed. After years of seeing our lifters perform the snatch and the clean and jerk at what for them are normal speeds of execution, we tend to look at the higher performances made by the best lifters and assume they are that much faster than us, that speed is one of their “secrets.”

Reality is much more prosaic. Some of the champs do indeed move at great speed. But most move no faster than those we see in our local garage meets.

To lift a maximum weight barbell, any clean or snatch has to be pulled at a certain speed. Too slow and even a light weight will be difficult to rack or catch. A fast pull only means you need more weight. When more weight is added, the speed of the pull must decrease. Simple Newtonian physics.

“Some of the champs do indeed move at great speed. But most move no faster than those we see in our local garage meets.”

This means your maximum snatch or clean and jerk will be done at the slowest speed that allows the weight to be racked or caught overhead. This speed is very precise, as anybody who tries to set a new PR soon realizes. Lifting your present PR will, on a good day, result in a success. Add 1kg to it and you will often fail.

The best lifters all have their optimum speed, as we all do. Some are faster than others due to gifted genetics that allow a more efficient display of fiber mobilization. However, most of them don’t lift much faster than any local level lifter. The only difference is the weights are a whole lot heavier.

Let’s move on to technique. Again, we assume that the champions will display better technique. This is true to a certain extent. Those who win medals generally do have better technique. Those finishing in tenth to last place have technique that is often no better than those who compete locally.

The big difference is that they’re making their mistakes with a lot more weight on the bar than we do. At the world level, even the athletes who don’t end up in the podium spots are very strong, and this is why they make it so far. They do well in spite of their technique, not because of it.

A number of technical mistakes appeared over and over at the championships. The most common was improper pulling technique. Many lifters are stuck in the 1960s. They still pull using the back, arm, and trap muscles instead of taking advantage of the much stronger leg muscles to raise the bar. There were even some in the top ten who pulled this way. You have to admire their raw strength, but you also have to wonder what they could do with better technique.

“At the world level, even the athletes who don’t end up in the podium spots are very strong… this is why they make it so far. They do well in spite of their technique, not because of it.”

A few lifters still seemed to think the best way to lift the weight off the floor is to try and yank it off the floor using bicep power, and lift with the elbows bent on the way up. But again, these lifters were pulling with a lot more weight than you or I would ever dream of.

A study of lifting styles also revealed some interesting points. While I missed a few of the early morning sessions, I don’t believe I saw a single split snatcher or split cleaner. This style is dead at the senior level. It only exists with us broken-down old masters who have no choice. There were a few power jerkers, maybe twenty or so.

A few lifters used the full squat jerk style, and surprisingly enough they were among the would-be leaders. I wrote an article criticizing this style some time ago, and after watching some of the best lifters in the world using this technique, I have not altered my opinion. 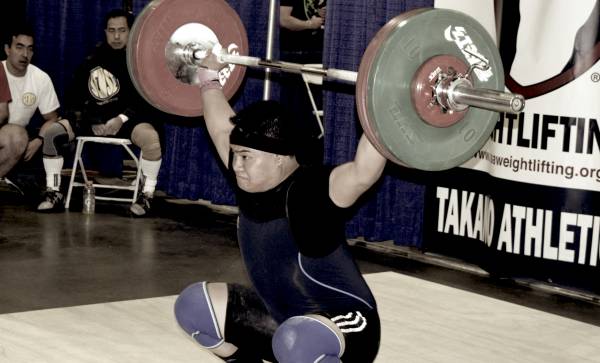 At the world level, athletes make it to the podium in spite of their technique, not because of it.

Case in point: three Chinese lifters were leading the pack at the end of the snatches in their weight categories. It looked as though they could win the gold on their first attempts. But that didn’t happen. All three bombed out on three of their jerks. They were strong enough to power jerk, but they insisted on riding the bar all the way down.

The most that can be said was that these lifters were doing this with weights in the 200kg range, while we duffers would have a hard time maintaining balance with 50kg in this style.

To those of us who are just local hackers, a trip to the Worlds is a big eye-opener. There is lots to learn, so I hope to share that with you in the coming weeks. I will leave you with Lesson #1:

World champions are just like us, except for one little thing: they are a hell of a lot stronger. That’s all.