My training continues as I head toward my tournament. While I sometimes struggle with my nutrition plan, I am getting leaner and according to my BioForce HRV, I’m getting fitter, too.

“Your daily nutritional regimen, including your diet and any supplements you take, is incredibly important because it affects not only the training load of a given session, but also the phase that follows.” Joel Jamieson, The Ultimate Guide to HRV Training

Before I began my eight-week tournament training schedule, I worked with certified nutrition coach Ricky Goodall to create a diet plan based on my energy requirements. Ricky received his Sports Nutrition and Level 1 Nutrition Coach certificates through the Body Mind Institute and studied biology at Saint Mary’s University in Halifax, Nova Scotia. When customizing a diet plan, Goodall says he considers the client’s “training schedule, including how often they train and what time of day.” He goes on to explain:

I customize the meals to make sure they are getting the proper nutrients to promote fat loss, recovery, hormone optimization and much more based on what they’re looking to achieve. My plans weigh heavily towards keeping a client’s pH level alkaline and I achieve this through the foods themselves and also a morning alkalizing drink and supplements.

The plan starts with a very basic cleanse to rid the body of many toxins and also give a boost of alkalinity. When some clients become more advanced I may have them doing a cleanse every few weeks or even cleansing for three or four days, rather than one to two. The body gets full of acidic particles and the cleanse helps get rid of those while also removing waste in the intestines which can cause sickness, disease, and also unwanted weight.

I chose not to do the cleanse, but instead let my body detoxify slowly as I cleaned up my diet. Popular health gurus such as Dr. Oz speak highly of the spiritual and health benefits of cleanses, but I know for a fact that if I started a diet with two days of deprivation I would binge on candy bars as soon as I walked into a grocery store and saw them on sale two for $1.50.

In my article about mental toughness, I said, “While training for competition, every time we cheat on our diet or skip a workout, we quit. We set ourselves up for failure rather than success.” While I’ve been hitting the gym regularly and making gains there, my diet has been very tough to stick to. I’ve never been on a diet before and previous to my tournament training, I had been regularly eating fast food and candy. A lot of it. The diet has been such a huge change for me that sometimes I panic and binge on a giant cinnamon roll or two Klondike Drumsticks but overall, for my meals I have been following the plan. Even without strict adherence, I’ve lost approximately 8-10 pounds.

I’ve never been the type of person who blindly follows advice without doing my own research, so as I’ve been changing my eating patterns, I’ve been reading books such as The Grappler’s Guide to Nutrition and various paleo books. In Robb Wolf’s book, The Paleo Solution, he suggests that grains can cause digestive problems. I have gastroesophageal reflux disease (GERD) which means the sphincter that is supposed to keep the contents of my stomach in my stomach is weak. As such, it can open to allow digestive acid and other things to flow back into my esophagus. This is especially bad during exercise because as I breathe heavily, I inhale the acid into my lungs which causes damage and discomfort.

In my diet program, breakfast includes oatmeal on some days and side dishes such as lentils and quinoa. While these foods are praised for their nutritional value by leading health experts, I find some of them to cause digestive issues and decided to stop eating them as per the advice in The Paleo Solution. For example, this morning I ate eggs and oatmeal a few hours before my Brazilian jiu jitsu training and I could feel the oatmeal coming up during the whole class. Considering the period of time between consumption and training, it is clear that I was not digesting it properly. I’ve decided to experiment with alternatives like sweet potatoes and other vegetables and monitor the effects.

Vitamins that Ricky has suggested to be essential are vitamin C, calcium and magnesium, and a multivitamin. When I wake up in the morning, I take two acidophilus capsules for digestive health. With my lunch I take fish oil, for its reported joint and cardiovascular health benefits; glucosamine, also for joint health; and a multivitamin. Before bed I take vitamin D, which helps the body absorb calcium to promote healthy bones and teeth, calcium and magnesium, and zinc. Zinc and magnesium are often taken in a single supplement to promote a restful sleep, but when all else fails and I still can’t sleep, I take two melatonin caplets and fall asleep within the hour.

I’ve also joined Team Q5 Combat, a supplement company developed for older athletes like me who compete against younger opponents. I will be using Amass Whey Protein after my training sessions and HGH MaxiStak before bed for recovery. What I love about the Amass Whey Protein is that it’s made from pure New Zealand whey derived from grass fed cattle. Reportedly it is “Clean and pure with only 5 ingredients that you can actually understand. It tastes amazing, and delivers 21 grams of highly bio-available protein per serving.”

Regarding HGH Maxistak, the website says, “HGH MaxiStak contains a special blend of 5 free form amino acids known as secretagogues, that are specifically formulated to support the release of the body’s own Human Growth Hormone (HGH) naturally. HGH is the ultimate master hormone. It stimulates tissue repair, cell replacement, brain function and enzyme production.” I don’t know what all (any) of that means but I like the idea of turning into a beast as I sleep. I will review both of these supplements once I have completed my training program.

As you can see in the screenshot below of my BioForce HRV chart, this week I’ve made a little more progress in improving my heart rate variance (HRV) with an increase of 3 points from 85 to 88. My goal is to be at 90+ by the end of the eight weeks, which will place me at the endurance athlete level of aerobic fitness. Although my resting heart rate improved last week, I saw a decline from my best score of 61.8 to 64.9 this week. Both of these measures are affected by the stress we put on our bodies during exercise, but according to BioForce, they are equally affected by stressors like “lack of sleep, mental anxiety, poor nutrition, alcohol and other drugs.” The holidays encourage many of these things but thankfully, they are over now and we can all go back to our regular routines. 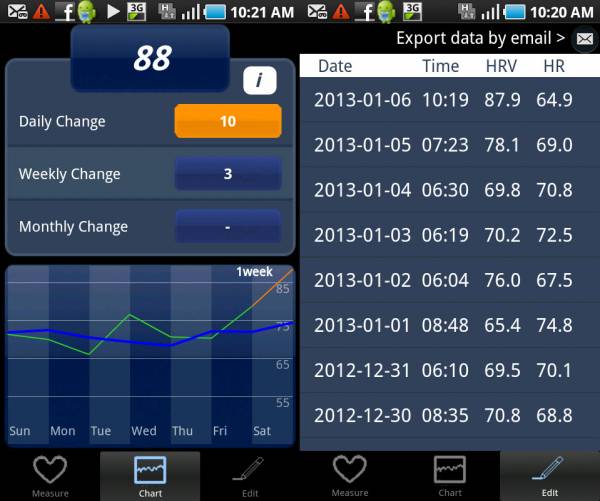 My weight in the last six to eight months has varied between 110-113lbs, but since I began this training program, it varies from 103-104lbs. Although I am experimenting with some of the details of my diet program from Ricky Goodall, it is a very effective plan and I’ve seen great results overall. Check out his blog for his story about becoming a nutrition coach, training tips and recipes such as the Perfect Blueberry Banana Protein Pancake.