The term mental toughness brings to mind images of fighters withstanding seemingly intolerable punishment and persevering. We equate it to fighters like Frankie Edgar who has taken brutal beatings in the early rounds of several of his fights, yet come back to dominate. UFC President Dana White has called him the real-life Rocky Balboa.

Researchers have tried to discover what makes guys like Frankie able to keep going while others quit. Much of the focus in books about mental toughness is centered on “game day,” but I see the champion’s mindset as a habit formed over time. In my studies there appear to be three components involved in building yourself mentally for competition: daily efficiency, hard work, and self-awareness.

“We are what we repeatedly do; excellence, then, is not an act but a habit.” – Aristotle

We don’t usually equate mental toughness to packing a lunch every day or with sacrificing plans with our friends to stick to our training schedule, but while training for competition, every time we cheat on our diet or skip a workout, we quit. We set ourselves up for failure rather than success.

I recently watched a documentary about professional bodybuilder Kai Greene. In it, Kai stressed that becoming a champion is the result of planning every day efficiently. He said:

You can’t aspire to win the show if you just see the show as the show that day, something separate and apart from the little each day and the little things that you do in the totality of that day that add up to an efficient day of efficient action. And stringing more days of efficient action together ultimately you can produce the end result that you’re looking for. This is not believing in some spiritual hocus pocus and mumbo jumbo that’s nonsense. No, this is recognizing the power that you have in your own hands with the decisions that you make each day.

As I mentioned in the first part of the tournament training series, UFC Fighter Chael Sonnen has been doing a lot of research about mental toughness and shared some of his thoughts in a recent interview. He believes if you inconvenience yourself, if you do the things you hate like running in the snow, training late at night or very early in the morning, and you do it consistently, you will develop a “genuine expectation of winning for the price you had to pay.” In the interview, Chael recalled a wrestling match that brought the notion home for him:

I remember Les Gutches was in the semi-finals against Ray Brinzer and they went into overtime at two a piece and that match wasn’t even supposed to be close and they ended up in overtime. And Gutches got the takedown and won, and he said that he just knew he had worked too hard, he’d sacrificed too much. He wasn’t going to give it away. And once you really start to truly, truly work hard like that, like Gutches did, you get that confidence but you also get an arrogance about you where you expect to win. You demand to win. But you have to work really hard to feel that inside. And that’s something I learned late in life, I wish I would have learned it fifteen years ago. [Would have] changed my whole life, if I had.

“It’s very hard in the beginning to understand that the whole idea is not to beat the other runners. Eventually you learn that the competition is against the little voice inside you that wants you to quit.” – George Sheehan 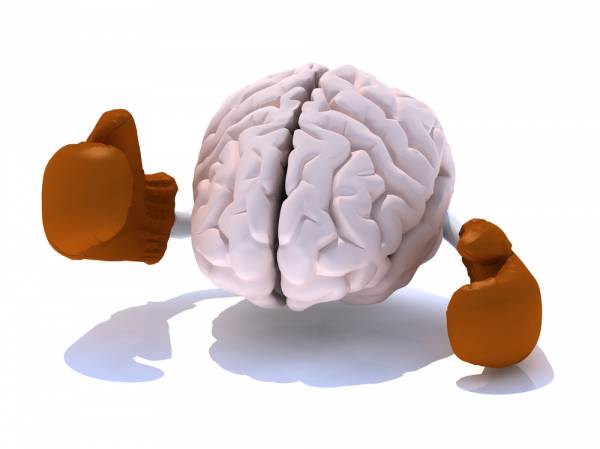 When your body begins to fatigue, there is a signal sent out from your brain that tells you to quit. In his presentation about Energy Systems at the Central Virginia Sports Performance Seminar Joel Jamieson explained how the brain tries to maintain homeostasis, which is the body’s method of keeping it at the status quo, or alive. Joel explained:

In order to prevent you from ending up in rigor and stiff, there are systems in place that make you slow down. There’s actually some interesting stuff that shows there are changes in your brain that basically make everything feel harder. It increases the rate of exertion; if it feels harder, you slow down. So that’s part of the mental aspect of mental toughness. Some people can override that. They can just basically keep going even though it feels harder they’re going to push through it whereas other people are going to not. They’re going to listen to that sensation and they’re going to slow down. So as I said, you’re never actually running out of ATP, you still have the energy to go but the brain is sending you signals to stop it because it doesn’t want to run out. So it’s slowing you down. There’s a lot of research that shows that central coordination is a big factor of fatigue. It explains why certain people have the mental capacity to drive through stuff that others may not because they’re able to override the signals and say screw it and keep going.

Anyone who has read the book The Brain that Changes Itself by Norman Doidge, MD or is familiar with the concept of neuroplasticity, the brain’s ability to adapt, knows that if we work hard, we can gradually change the neural pathways in our brain. So if we are aware of what is happening in our bodies, those of us who don’t naturally override that sensation of exhaustion during training can gradually train ourselves to do so.

As we train our bodies for competition, we are also training our minds. Dedication, hard work, and self-awareness are qualities athletes need to develop to be successful. Often we think that successful athletes are simply genetically gifted, but fortunately hard work beats talent when talent doesn’t work hard every day of the week. Becoming a champion is a decision we make with every meal, every training session, and every time we keep moving forward.

The past week was a little rough because I was sick and missed a lot of BJJ classes, but now that Christmas is over, life is getting back to normal. I was still able to hit the gym and keep up with my strength and conditioning and I’m back at BJJ tonight.

My resting heart rate decreased from 77 bpm to 61.8 bpm, which means I went from being in average shape to excellent shape in about eight days. I’m not sure why I saw such fast improvement, but I was in much better shape previous to having a couple of injuries this year so my body could be returning to that level. As you can see in the screenshots of the BioForce HRV smartphone app, my heart rate variance has also improved from 66.9 to 84.8, which means that I went from having fair aerobic fitness to high aerobic fitness. It does vary from day to day, depending on the previous day’s activities so it will be interesting to watch as the weeks progress. 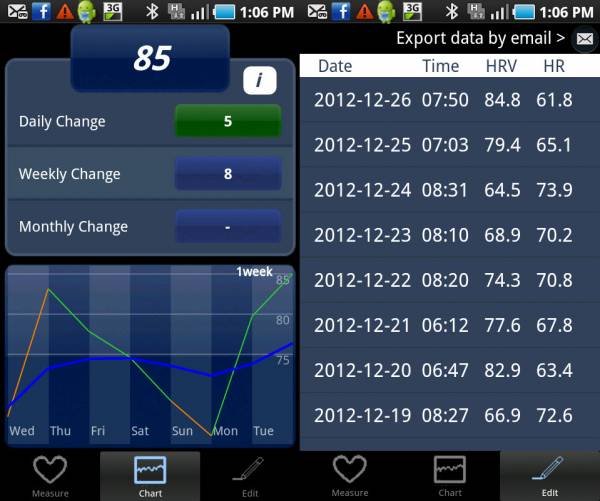