I’ve spent the past 8 weeks tweaking my technique and strategy. These are the tools I’ve used, plus an update on my training – frustratingly, I’m not gaining weight and my heart rate is not improving.

Drilling is often done during the warm up portion of class and allows athletes to build muscle memory for technical movements in BJJ. Two resources I’ve found to be very helpful in regards to drilling are Jason Scully’s YouTube channel and Andre Galvao’s Drill to Win.

Jason Scully provides a series of videos offering options for both partner and solo drilling while Andre Galvao’s book is a 12-month training guide for athletes who want to take their game to the next level.

The book description explains, “The key to this book is in its building block methodology that follows Andre’s basics of grappling – the ability to move and adapt to new movements in Brazilian Jiu-Jitsu.”

The first time I became aware of Andre Galvao was when I watched Arte Suave’s DVD set. Galvao demonstrated some of his drills and he truly does have the most fluid movement I’ve seen in BJJ.

A Framework for Drilling from Inside BJJ also gives a quick and simple overview of how to choose and execute a drilling program.

Another important training tool is positional training. At Titans we usually do timed rounds in which one partner tries to pass guard (butterfly, closed, or open) while the other tries to sweep or submit.

When one person is successful, the pair begins again, switching positions for the next round. We do the same type of thing starting with one person on the other’s back, in side control, and various other dominant positions to allow one person to practice maintaining and advancing while the other tries to escape and reverse the position.

In the DVD set How to Defeat the Bigger Stronger Opponent Series 2 with Stephan Kesting, Brandon Mullins explains that we need to learn to be comfortable in uncomfortable situations.

Knowing you can survive when you are in a bad spot will help you to maintain your composure and not gas out during an already stressful situation. Some people think defense is something you can work on as you roll and get caught, but when preparing for a tournament that’s not a smart decision.

Mullins and Kesting discussed how it is not uncommon to see someone who is at brown belt level with submissions but at blue belt level in escaping those same submissions. They suggest that it is important to spend as much time drilling defense as it is to drill offense, and I agree.

The Defense and Escape Game Plan DVD has helped me over the past few months. One technique I’ve found to be very effective is a simple mount escape that Brandon used a lot when he had a back injury.

I worked with my teammate Renzo Gracie purple belt Scott Nauss, from our affiliate school, Marmac Athletics, to modify the escape to better suit my game.

Many of my teammates at Titans MMA are travelling to compete at the same tournament as I am in a couple of weeks.

Although we do try to help each other as much as possible, we all have to take responsibility for our own progress.

So another tool I’ve been using is instructional DVDs that help me to tweak my strong points and make them even better. 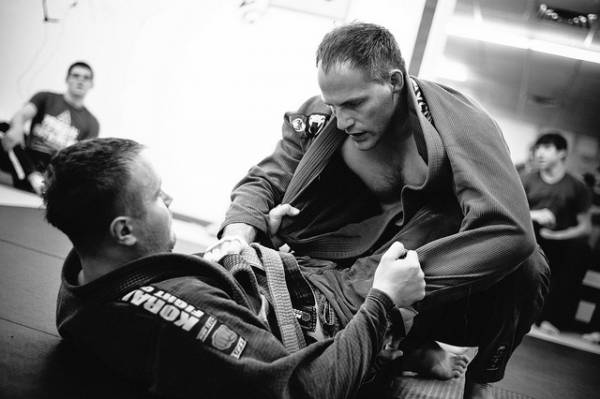 A technique can work perfectly when you’re learning or drilling it, but when you’re rolling with full resistance, it can often fall flat. We usually roll for about an hour out of each class at Titans MMA.

Drilling and practicing technique is important, but there is no substitute for actually hitting the mats and trying to impose your game on an opponent.

Competition classes with high intensity rolling, open mats, and visiting other clubs are fantastic methods to prepare yourself for the different styles and games you may be up against at a tournament.

Over the past week my rolling has felt smooth and I’ve seen a lot of progress in my game. My energy level and cardio has been good and I’m feeling confident for the tournament.

I am fighting a head cold and that could be a reason why my resting heart rate and heart rate variance went downhill this week, as you can see in the chart below.

My scores hit lows of 77 beats per minute in RHR and 72.7 for HRV, which is close to what my scores were at the beginning of my training program.

The pattern I’ve noticed in my BioForce HRV results is a steady decline during the week, with a high fitness level score on Mondays.

My current theory is that I’m not getting enough sleep at night during the work week and catching up on the weekends. During the week, I usually start getting ready for bed at 10:00 but don’t wind up there until 10:30-11:00.

My alarm goes off at 6:00am so I’m only getting about seven hours of sleep a night which doesn’t appear to be working for me. My plan moving forward is to begin getting ready for bed at 9:30pm to try and get a solid 8 hours of sleep.

In other news, I haven’t been able to increase my muscle mass over the past week. In fact my weight varied from 104-105lbs this week as compared to 105-108 last week. People are often surprised by the amount of food I eat, but the experiment to find the ideal combination and quantity continues. 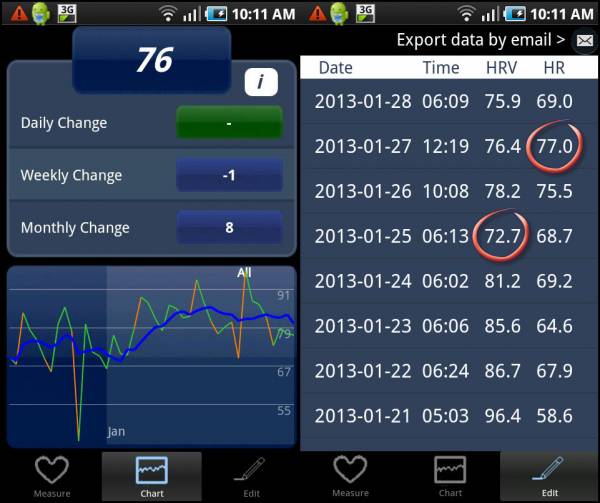