I can’t remember when I first realized there was no Santa Claus. Nor can I tell you when it first dawned on me that advocates of the transverse abdominis/multifidus co-contraction theory of lumbar stability stand firmly next to Flat Earth Society members, but trust me once you do grow up and discard these comfort blankets of mental childhood the world is a far better place for it.

I have never read an explanation about of how to dismantle the theory that transverse abdominis (TrA) and multifidus were the co-contraction couple that provided stability for the lumbar spine. So I’ll take the lead, it is time to pay attention to that man behind the curtain and examine what really is going on in the land of Pilates Oz.

There was a time last century when a paper was published called Muscle control–pain control. What exercises would you prescribe? In it the authors, Richardson and Jull of the University of Queensland, proposed evidence showing that TrA and multifidus were the two most important muscles involved in the resolution and rehabilitation of low back pain. They stated that these two muscles worked as a “force couple” providing the muscular stability for the joints of the lumbar spine.

I don’t know why, but the health professions followed like lemmings off a cliff, and their proposal became sacred law. I don’t know why anatomists didn’t do a collective WTF! But somehow it just sneaked past almost everyone. It is now time to put this beast out of it misery once and for all, so here is my collection of wooden stakes. Gather round and grab some, because we are going hunting!

What I am going to do is list some of the concepts and references used by Richardson and Jull, and show you how that research either does not apply or even, in some cases, proves them wrong: 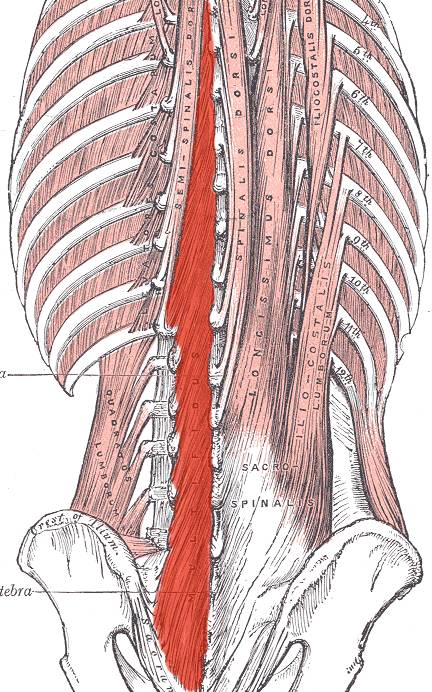 One method of increasing joint stability is through enhanced muscle stiffness by the co-contraction of agonist and antagonist muscles that lie on each side of a joint. This applies to unidirectional peripheral joints such as knees, elbows, and fingers. The problem is that the spinal segment is multidirectional, and does not have agonist and antagonist muscles directly attaching on each side of its joints.

Read this: there are no muscles attaching in front of the spinal joints. Spines are not similar to the unidirectional peripheral joints. The multifidus muscle (shaded dark red in illustration to the right) of the spine opposes the flexion moment of the oblique and rectus abdominis muscles, not the contraction of transverse abdominis, because TrA does not have a flexion moment. So, the only muscles that may be considered to be “force couples” are the oblique and rectus abdominals and the spinal erector muscles as a group.

Following from this, to support their theory, Richardson and Jull state that they define TrA and multifidus as local muscles, because in the standard unidirectional joint only local muscle can stabilize the joint. Then they use a study that clearly shows their definition is wrong, but they state that study supports their definition. It makes astounding reading, here it is: Bergmark differentiates betwen local and global muscles.

Richardson and Jull propose that they are supported in their definition that TrA is a local muscle by this study of lumbar spine stability. Bergmark proposed a difference between local and global muscles in that global muscles are those that provide general trunk stabilization. Richardson and Jull also state, “Such muscles (global) balance external loads and in that way help minimize the resulting forces on the spine. Local muscles refer to those attaching directly to the lumbar vertebrae. These muscles are considered to be responsible for segmental stability as well as controlling the positions of the lumbar segments.”

Okay, here is the truth, and read it carefully:

Transverse abdominis does not attach directly to the lumbar spine.

TrA attaches to the middle lumbar fascia. It is not the only muscle that attaches to the fascia, and additionally and majorly, the TrA does not control the position of the lumbar spine joint. It can only be described as a “global muscle.” TrA contraction increases intra-abdominal pressure; it balances and creates general trunk stabilization only. By Richardson and Jull’s own definition TrA is a global muscle. Bergmark further states, “The global erector spinae muscles are by far the most important back muscles both in regards to equilibrium and stability of the spine.” Not the TrA and multifidus that Richardson and Jull propose. 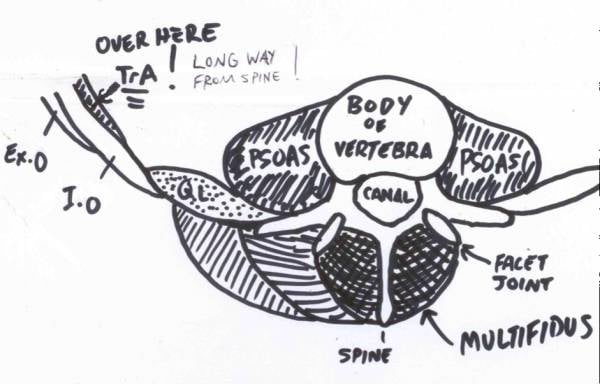 Yes, I drew this.

Further to this, the Bergmark study referenced states that the global and local differentiation was only used to create a mechanical modelling system for the study. This is not an anatomical fact of differentiation, but a modelling tool, and Bergmark states on page 48, “In the model only back muscles and no abdominal muscles are included.”

Bergmark ascribed muscles to these groups according to their main function. TrA’s main function is the creation of intra-abdominal pressure. Bergmark states, “The main role of the global system appears to be to balance the outer load so that the resulting force transferred to the lumbar spine can be handled by the local system.” He also states that the “local muscle system” is defined by all muscles that have their origin or insertion on the vertebrae, with the exception of the psoas because it is a hip flexor. (Bergmark did not appear to understand the role of psoas, with its direct spinal attachment upon the vertebral bodies (not joints), counteracting the action of iliacus upon the pelvis, and the psoas’s role in producing intra-discal pressure when contracting.) 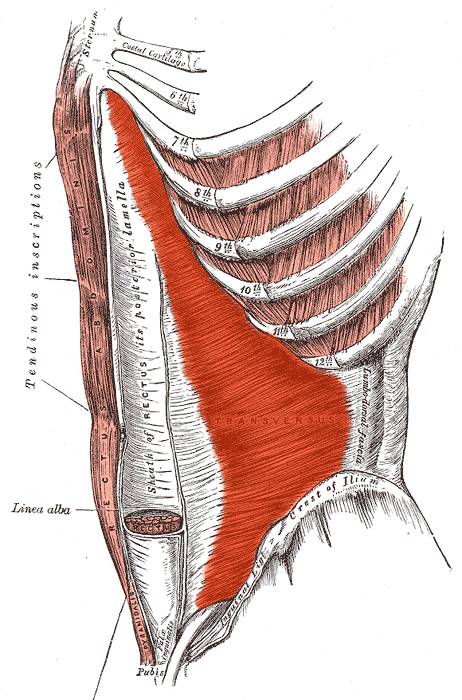 Richardson and Jull then state, “A muscle that could be described as part of the local system, and which has not been studied extensively to date, is the transversus abdominis. Its importance in lumbar stabilization was first addressed by Cresswell et al (1992).” Well, I read the Cresswell study and here it what it says: “It appears that transversus abdominis is the abdominal muscle whose activity is most consistently related to changes in intra-abdominal pressure.” So Cresswell, whom they reference, gives his determination of TrA’s role in lumbar stability as that of a global muscle producing intra-abdominal pressure.

Richardson and Jull continue, “These researchers studied the muscles of the back.” No, they did not actually. No back muscles were studied! The study is titled, Observations on intra-abdominal pressure and patterns of abdominal intra-muscular activity in man. Why did Richardson and Jull state this study included back muscles? Cresswell’s study demonstrated that the TrA had direct links with the development of intra-abdominal pressure. Furthermore, it demonstrated that this muscle contracted with all trunk movements regardless of the primary direction of movement. The study totally disproves the concept that defines transverse abdominis as a “local muscle.”

As I was searching for a reference given by Richardson and Jull, I was able to find another paper of interest published in the journal Physical Therapy – Hodges and Richardson’s Contraction of the abdominal muscles associated with movement of the lower limb. Interestingly it involves one of the authors of the paper we are dissecting.

In the results of this study it states, “Although reaction time for the TrA muscle was consistent across movement directions, reaction time for the rectus abdominis and multifidus muscles varied with the direction of movement.” You will note that this statement conflicts with the co-contraction theory proposed in Muscle control–pain control. Reading this study it was clear that TrA and multifidus are not co-contracting, are contracting separately, and multifidus is contracting in response to the direction of limb movement. Stated – TrA is not direction specific, and multifidus activity is direction specific. So, Richardson and Jull have a study by Richardson that conflicts with their co-contraction reasoning, yet that conflict is not raised in Muscle control–pain control.

So, here is a quick summary. Transverse abdominis and multifidus are not a co-contraction force couple that stabilizes lumbar joints. Transverse abdominis is a global muscle whose action is non-specific to spinal joints. Multifidus is a local muscle whose action is specific to spinal joints. Multifidus is direction specific and contracts to oppose the flexion moment produced by contraction of the oblique abdominal muscles in particular. Exercise to isolate transverse abdominus in fact will likely produce a destabilizing effect by excluding the oblique abdominals action. This is non-functional, and should not be used in the rehabilitation of athletes with low back problems.

1. Bergmark A 1989 Stability of the Lumbar Spine. A study in mechanical engineering. Acta Orthopaediea Scandinavica Supplimentua 230(60):20-24