CrossFitters are a fairly compulsive people, are we not? Once we get bitten by the sting of CrossFit gainz, we can’t help but live the lifestyle for all the world to see.

From our “For a Good Time Call Fran” t-shirts, to the latest lululemon Wonder Unders (what are those?), to those five-fingered atrocities we wore on our feet back in 2010.

As the glow of CrossFit began to sharpen into a white-hot spotlight, innovators, entrepreneurs, and opportunists alike all leapt hard onto the bandwagon in order to share in a piece of the pie. CrossFit, remember, is not just the cost of your monthly membership – it’s the cost of all the stuff. And Lord knows, we can’t CrossFit without the stuff.

Before 2010, all you needed to CrossFit was a pair of shorts and some Chuck Taylors. But before long, we started spotting people wearing Vibram FiveFingers shoes, and suddenly, like lice, everyone had them. We didn’t know why we needed them. We just knew they looked cool.

“I am working on a patent as we speak for box-jump shin protectors. My prototype is tube socks, rolled up into a ball and taped to the shins.”

And thus began the commercialization phase of CrossFit. The CrossFitter as consumer target. And with it, the CrossFit Games vendor village went from Panda Express in 2008 to dozens, maybe hundreds, of vendors paying upward of $20,000 for a booth at the StubHub Center, all vying for a piece of your pie. If a product or service grows organically, most likely it will succeed. But if someone sits down and says, “Hmm, what can I invent to cash in on the CrossFit craze?” then most likely it will fail.

With that, here is the 2015 Hall of Fame of CrossFit-related products with a less-than-auspicious lifespan. (These are in no particular order, but do yourself a favor and pay particular attention to number five.)

It’s not that we don’t want a convenient way to transport our paleo food. It’s that there is no universe in which we would carry said food in a kettlebell-shaped container. 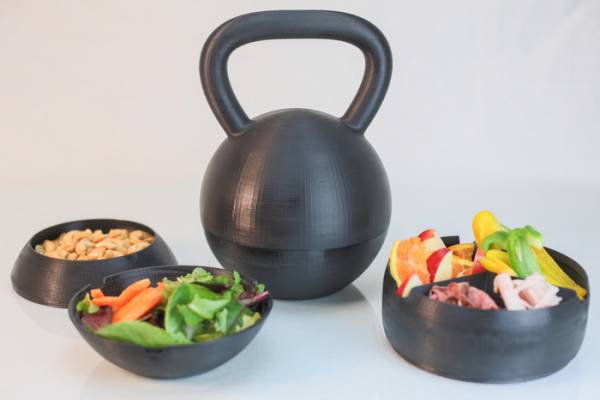 Yes, we obsess, but there are certain lines that common sense says we just won’t cross. I have to believe there was a point in this product’s creation process at which someone said, “Guys, you know this isn’t going to sell, right?” Like Clairol’s Touch of Yogurt Shampoo, it just shrieks of faildom.

Hmm. You’re a CrossFitter in reasonably good shape, looking to find someone who shares your interests and passion for working out. If only there was a place to meet other CrossFitters. Someplace where they all congregate together: 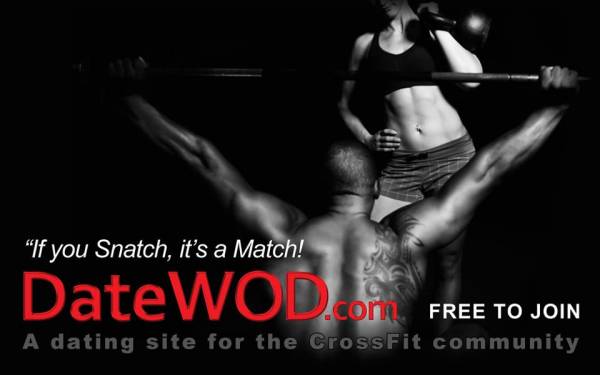 DateWOD actually had a booth at the 2012 CrossFit Games vendor village – I walked right past it. Apparently, so did everyone else. The site is still up, but from all indications everything about DateWOD has been abandoned.

We have all (admit it – you have) done the ol’ deck-of-cards approach to creating a workout. If we hadn’t, then the good folks at Barbell Cards would not have thought this idea would fly. Pick a card, execute the movement. This type of programming is almost as random as what shows up on the main site these days. 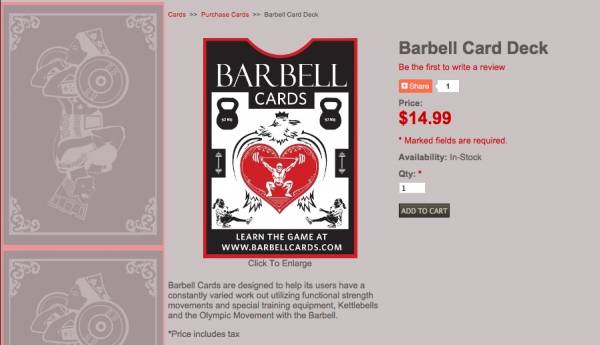 Nothing like abdicating your programming to a deck of cards, I always say. I have to give them credit, though – they are still posting every day to their Facebook page, but with only 184 likes, they’re not reaching a significant audience.

I have to give the inventors of the Back Squat Dickie credit. I think they might actually be punking us. In which case, I would almost buy one of these. 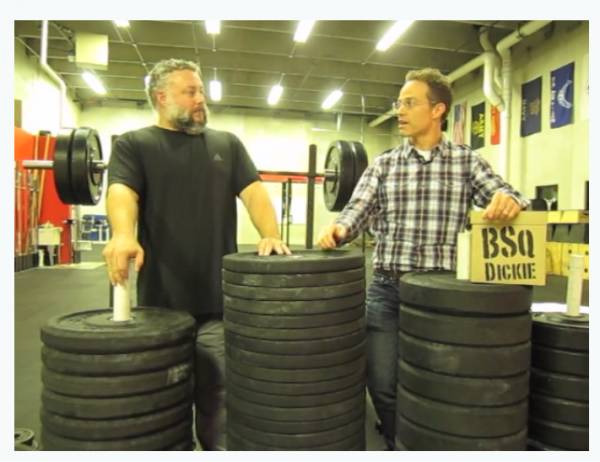 This was a Kickstarter campaign that came up with a tool and pattern that allowed you to take one of your own hoodies and cut out the hood to make it into a “dickie with a hood.” The idea being that you could wear this when you did squats. Neck saved, but you would not get sweaty. Perfect! Except that the idea of a barbell pad for back squats was invented decades ago and the only people who would wear a sliced-up hoodie for squats are those people who brought their lunch in a kettlebell.

RELATED: Save Your Back – Switch to Front Squats

Reading the Kickstarter page, you get the sense of levity with which these guys approached this, hence my suspicion of having been punked. At least, those who pledged the $13.00 raised so far have been.

This, I know, is not a ruse. This is real. This was an Indiegogo campaign and the pilot was created to generate interest in the campaign. Real actors were hired (the black guy from A Few Good Men). Real cameras. Real CrossFit Games champs (Kris Clever makes a cameo and, presumably, got her SAG card for this).

This is a classic case of “if people like CrossFit, they will love this” run amok. The producers apparently believed the consuming public couldn’t possibly get enough and the only way to supplement their thirst for more is with a TV series. And that may be so – who knows – but the first requirement is that something like this has to be good.

“Before 2010, all you needed to CrossFit was a pair of shorts and some Chuck Taylors.”

But in this case, the writers defaulted to every possible cliché in the book for the pilot. Of course the workout in question was “Fran.” Of course the opening scene was a husband-and-wife “you spend too much time at that place, today is my mom’s birthday” argument. Of course they used Eminem’s Lose Yourself as the backdrop for the workout. And yes, the inter-box rivalry of queen bees, all culled from the creative-writing midterm of a tenth-grade English class.

RELATED: Is It Time to Look for a New CrossFit Gym?

There seems to be some confusion in the YouTube comments as to whether this was meant to be satire.

Keep your wallets closed, folks. There is a vast industry of go-getters designing new products at this very minute who want your money.

Meanwhile, may I suggest you just keep to your shorts and Chucks.