I spend a lot of time talking about the basics. And for good reason! You can’t run if you can’t walk. We all know it, we’ve heard it, but we rarely take it to heart. When you are trying to learn something hard, like the snatch or a muscle up that hinges on technique, then you have to spend the majority of your time on the most basic components of the movement.

For instance, I teach the snatch pull as a combination of only three component parts or positions. You have to master these three positions before we go anywhere else. It does you no good to try and get to the next step if you can’t even do these right!

The basic moves are not complicated to understand. They are very simple all by themselves. The trouble is our brains can often confuse the word basic with the word easy. If that happens, then you’ll miss the point completely.

To get good at anything, you’ve got to work your tail off on the simplest things.

Knowing Is Easier Than Doing

Anyone can understand WHAT is supposed to happen in a complex motion like the snatch relatively quickly. Snatching is tricky, but it ain’t rocket science. There are a sequence of movements your body has to make, each with its own rules, and so long as you get those about 90% correct, you’ll be golden.

But, it’s the last bit of that line that presents the problem, “so long as you get those about 90% correct …”

You can’t just KNOW what to do, you have to DO it.

Coaches learn pretty quickly that any knowledge they have about the proper way to do things is worthless if they can’t find a way to get their athletes to actually do them. When they first start, they’ll over-explain every little detail, believing accuracy and detail are the keys to understanding.

The opposite is the case. Beginners need complex information filtered down into simple bite-sized pieces at first. And they need this stuff to become intuitive. That takes time and work. There is no other way.

Let me give you a few examples of this for people who are first learning the snatch.

Example One: Getting the Knees Back

In both the snatch and the clean, when the bar is at your knees (literally touching the knee cap), your shins should be perpendicular to the ground. If you don’t do this, the bar will have to zigzag around the knees on the way up.

I always explain this carefully to new lifters. “The bar needs a nice easy path from the floor to the hip,” I say. “Don’t get in its way!”

Inevitably, within a few attempts, they will fail to get the knees back … They understood me completely. But, their body hasn’t caught up yet.

A good finish on the pull requires you to get your hips “through.” That means your hips get to a point where they are hyperextending just a bit. That look of “back bending” that you see Olympic weightlifters doing is misleading. They are not extending with the lower back, they are pushing the hips forward which looks awfully similar.

If you don’t finish your pull, at least two things could happen that are bad. First, you’ll not put as much power on the bar as you could have. You’ll lift less weight. Second, you’ll likely leave the bar out front – it won’t get back far enough. You’ll miss weights you could have made because they are way too far forward.

You have to finish your pull on every lift. That is a concept that is remarkably easy to understand. And yet, nearly every lifter suffers from NOT finishing their pull when the weights get heavy. Get up to a heavy weight, and you’ll probably freak out and not finish. It happens to everyone.

Example Three: Getting a Good Start

There is a high correlation of a strong finish with a strong start. If you don’t pull the bar off the floor in the right way, and like clockwork on every lift, then you will never develop a good finish either. 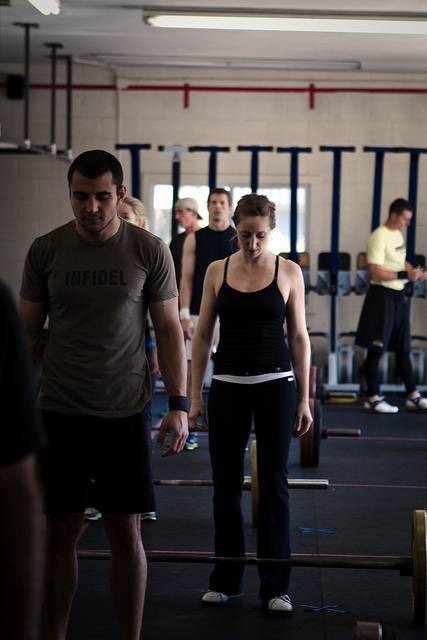 The big issue for most lifters is starting with the shoulders out in front of the bar. You want the shoulders back behind the bar – or at least right above it. If you can do that, then you’ll be setting yourself up to pull the bar right up over your ‘base’ (which is what I think of as the center of gravity of you and the bar combined.)

Start wrong, and your entire pull will suffer. Finishing the pull is hard enough to do correctly as it is. Imagine how much harder it is when the bar is way out in front of your center of gravity.

This start position needs to become absolutely locked in. You should start the same way every time, every lift, no matter what is on the bar. But, being this robotic about something doesn’t come natural to a dynamic animal like a human. Every little movement of the snatch should look exactly the same on every lift at all times. Sounds good, but holy heavens is that hard to do!

It doesn’t matter what the task or skill is that you are trying to learn, the way to bridge the gap between KNOWING and DOING is the same:

I told you to stay simple and basic, not to take it easy. There’s a difference!