Lately there has been a bit of a pregnancy boom at our CrossFit gym. I was fascinated to talk to these women about their workouts, giving birth, and recovery and how CrossFit helped.

When I arrived for my first orientation at CrossFit Los Angeles a couple years ago, a midday workout was in progress and a man with many, many ab-packs was doing solo sprints outside in the street. I was immediately intimidated to the say the least, but what distracted me most as I was being asked questions about my then state of unfitness was a woman doing wall ball shots with beautiful form. She was fit and strong, shining with sweat. She wore a tight tank top and capri leggings. She was also eight months pregnant. My feelings of intimidation sky rocketed then settled back down to a healthy self examination starting with the question: what’s my excuse?

I often tell Norma she was one of my first inspirations as a CrossFitter. Her son, Nicolas, is now two years old and Norma is CrossFitting like normal. Norma is also twenty-six weeks pregnant with her second child.

And she’s not the only one. Lately there has been a bit of a pregnancy boom at our gym. One woman very recently had a baby and three others are currently pregnant. They all continue or continued to CrossFit during their pregnancies. Norma was not an anomaly, it turns out, and I became more intrigued by each expectant mother’s experience. What I learned was that pregnant CrossFitters are not hardcore, crazed athletes determined to keep their personal lifting records intact at the expense of their and their baby’s health. They are conscientious mothers who believe CrossFit keeps them strong and prepares them for labor, delivery, recovery, and motherhood. And despite any paranoia and panic by some friends and family, CrossFit proves to be beneficial in many, if not different ways.

For as intense as CrossFit is, I got the universal feeling after speaking to each mother-to-be that they all share an ability to lay off when they felt they were pushing it too much. For some, it was instinctual. For others, pregnancy became a concerted practice in listening to the body supplemented with gentle reminders from supportive spouses. It also helps that one of our coaches, Jeremy Jones, has a pregnant and post natal certificate for personal trainers.

Most of their doctors were cautiously supportive though Courtney, who is just four months pregnant, received advice from her doctor to not take her heart rate over 140bpm. Considering that Courtney has a persistent pre-pregnancy knee injury and has struggled with nonstop morning-day-and-night sickness, she gladly yields this advice, even if it’s not easy. “Right now, getting out of bed and brushing my teeth gets my heart rate up to about 110. No kidding!” Courtney said. She also says the only time she does not feel nauseous is while she’s working out. Courtney has started to modify the weights she uses to also keep her heart rate down during workouts. The other women I spoke to began scaling workouts such as more assistance during pull ups and push ups from their knees at around five to six months into their pregnancies. 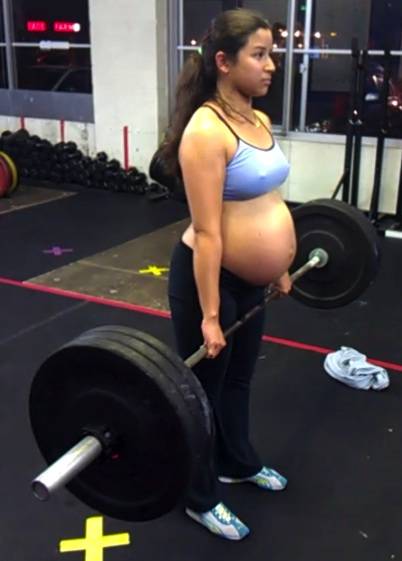 Alisa, who gave birth to a healthy daughter Fiona three months ago, is the only woman I spoke to whose spouse also CrossFits. And while a few of Alisa’s non CrossFit friends expressed their concerns about how much Alisa was working out, her husband Eric was very supportive. “It was a little embarrassing, actually. He kept telling people about my workouts and how ‘hardcore’ I was,” Alisa said. “He still does. He did it the other day at the dog food store.” This seemed to cause even more concern with some of Alisa’s friends about her doing too much. “Which is funny,” she said, “because they had no idea how hard I trained at CrossFit before I was pregnant.”

Dr. Lindsey Mathews of BirthFit, whose program encompasses and believes in a good prenatal balance of chiropractic care, nutrition, and fitness said, “I love pregnant CrossFitters! In general, the pregnant CrossFitting woman knows that fitness is a vital component of health.” Dr. Mathews is most concerned when pregnant athletes let go of the reins nutritionally. “Some women think this a free pass to eat whatever they want or that they just need the extra calories.” But this is far from true, she says. Eating real, clean food will only help the baby and mommy alike.

The women I spoke to have had mixed experiences in regards to nutrition. While all of them still believe and try to adhere to clean eating, some have had difficulty overcoming cravings for processed carbs and food they strictly avoided as non-pregnant CrossFitters. Letting go of the idea that they have to eat perfectly a hundred percent of the time during their pregnancy has relieved some pressure, actually, just like succumbing to the idea that workouts would need to be more and more modified as pregnancy went on. 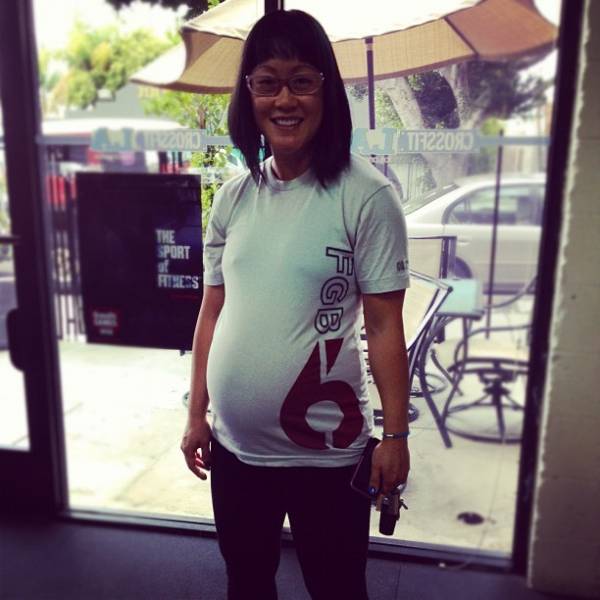 Jane, a long time CrossFitter who is about to have a baby any day, has become increasingly relaxed about everything as her due date draws near. “I can see how some women may feel compelled to prove to everyone that they can CrossFit the same way pregnant as non-pregnant. I’ve never felt like I had anything to prove,” she said. “I’ve been CrossFitting for over five years and I do it for my health, and exercise is a life-long journey. It wasn’t difficult for me to take it easy.” She stopped CrossFitting a couple weeks ago, but she continues to swim and walk. She said she misses the community most, however. “Going for swims by myself is just not the same. I really miss the companionship!”

I was most interested to hear about the effects CrossFit had during labor and post-partum recovery. Norma and Alisa had very similar experiences during labor. Both cite they were certainly able to handle the pain with more focus and without panic. As CrossFitters they are acutely aware that pain is temporary. During contractions, Alisa reminded herself, “I can do anything for five minutes.” Norma ended up having a Cesarean section because her pelvic bones were too slight, but she said her recovery was super fast considering. She got back to her pre-pregnancy weight quickly and she even was able to do unassisted pull ups for the first time because she had been working on them while she was pregnant! Alisa said that her recovery has gone really well. In fact, she said, “All my CrossFit training was a little bit of a double-edged sword. I was able to walk and move easily pretty much right away, but I wanted to do a little too much. My muscles were cool with lifting and walking, but my uterus disagreed. I had to dial it back.” 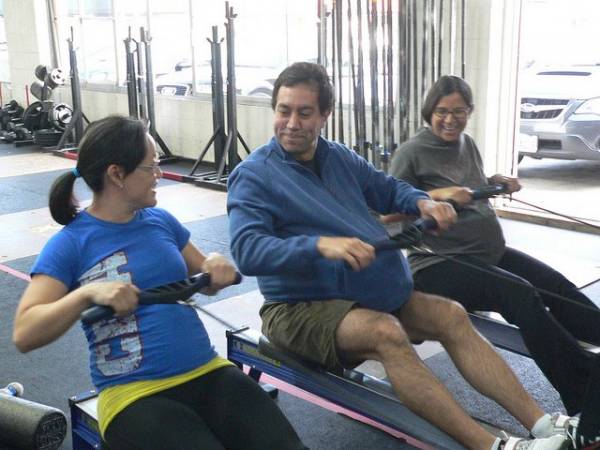 I am so inspired by these amazing women and their different approaches to CrossFit while they are or were pregnant. I’ve had the pleasure to work out with them, and it has been fun, relaxed and in many ways, particularly joy-filled. I feel their stories not only encourage future moms-to-be, but all athletic women. Just like it did me that first day I stepped foot into a CrossFit gym.