Let me tell you a story that will surprise you. It’s about a performance athlete, whose rehab after a calf injury was targeted in a bizarre way and demonstrated extraordinary results. I say this rehab was “bizarre”, because it wasn’t mainstream. The athlete in question was a footballer who had injured his calf and came to me for treatment and rehab. He had a tremendous capacity to run, jump and play in one of the toughest games on the planet – Australian football.

Let me tell you a story that will surprise you. It’s about a performance athlete, whose rehab after a calf injury was targeted in a bizarre way and demonstrated extraordinary results. I say this rehab was “bizarre”, because it wasn’t mainstream. The athlete in question was a footballer who had injured his calf and came to me for treatment and rehab. He had a tremendous capacity to run, jump and play in one of the toughest games on the planet – Australian football.

You need strong calves to play a sport like Australian football.

Here’s what he told me:

“My calf hurts, and I can only do 22 slow rep calf raises on that leg, compared to 28 on the other.”

22 to 28 calf raises. A 21% asymmetrical deficit. I got to work, performing a test to demonstrate deficits in control of movement at the limits of stability, then put a handful of targeted correctives in place to improve stabilizing performance after initial assessment. After these stabilizers were put in place, I retested the athlete’s performance.

In three days, we reduced this asymmetry from 20% to 6%, increased load tolerance by 75%, and his speed under load by 9%. If it only matters what I can prove, that’s the proof. Here’s how the story unfolded.

My Problem with the Calf Raise

It turned out the athlete in question had injured his soleus. The soleus muscle has multipennate fibres. This means instead of the fibres converging into one tendon and one point of attachment, the fibres converge on several points on more than one tendon.

Multipennate muscles like the soleus aren’t designed to contract and relax in movement like a slow rep calf raise – they’re designed to contract and hold length, strongly, to give the Achilles tendon something to grab against so it can act like a spring. It’s an isometric muscle. A stabilizing muscle. With this in mind, I would argue the calf raise, this athlete’s test of choice, asks the soleus muscle to work in a way it’s not designed to. So I used another method.

A Better Test: The LQYBT

The test I used was The Lower Quarter Y-Balance Test (LQYBT), an extensively researched and reliable test that highlights increased risk of future injury. A key element the LQYBT tests is whether asymmetries exist between the left and right foot in balance. It tells me how well the athlete can balance on one leg and reach the other foot forward as far as possible without losing balance, then return to the starting position. It also tests how well they can control movement, and how far out of their comfort zone of control they can get. In other words, how good their stabilizing muscles are at providing support as their bigger “prime mover” muscles reach.

This athlete reached 50.5cm on his injured side and 63cm on his other side. We see right away the glaring asymmetry working out at around – you guessed it – 20%. The echo of the calf-raise test is clear, and the LQYBT has far more research supporting its results.

The Hierarchy of Performance Rehab

Now, traditional rehab or training for a calf injury of this nature at this point would be to strengthen the muscle. Calf raises and stretches, right? Well, this established powerhouse running athlete had a mature training body, so strengthening would take about six weeks to see significant improvement. 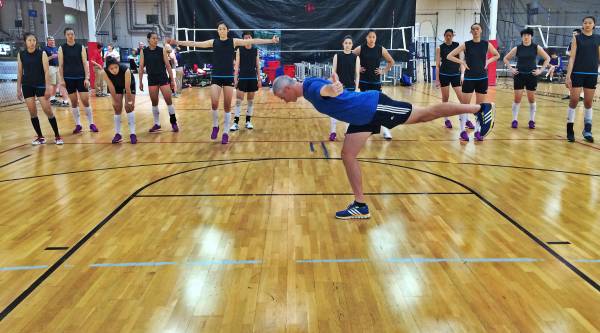 Training stability is critical to any functional rehabilitation.

The hierarchy of approaching this task is to restore freedom of movement of limited body parts, then retrain the body to control this movement. After restoring mobility in a joint, or set of joints/tissue, there’s a window of opportunity to take the increased feedback from local “movement detecting nerves” and improve control of the joint. The first step is to coach and cue the athlete to demonstrate minimal to no movement at the joint(s) of interest, maintaining appropriate alignment in the presence of other body part movements.

When this static stability is achieved with competence, it’s then essential to coach dynamic stability – where the athlete demonstrates unrestricted freedom of movement in a supportive situation while also maintaining appropriate alignment.

According to this hierarchy, I evaluated the athlete for weak links and attempted to clear them up first. His potential weaknesses fell into three categories:

Here’s what we did to address these issues.

No performance training was included at this point -yet.

After treatment concluded, we re-tested the athlete’s performance capacity.

Here are the results of the LQYBT testing:

Single leg movement control capacity (measured in the LQYBT) improved from a 20% asymmetry to a 1.5% asymmetry in just 11 days.

This is Not a Hypothesis

I put it to you that training stabilizers can improve performance. Training mobility, static stability, and dynamic stability of the whole body improved this athlete’s performance and reduced his injury risk. I can hear the detractors gathering. They can argue with those numbers. This is not a hypothesis anymore. This actually happened.

Here is the continuum of performance rehab:

What came next for our athlete?

Prepare to perform. Measure it to prove you’re on track. Follow a system. Simple.