Push-ups are one of the oldest and most widely known strength exercises on Earth. They’ve been a staple in military fitness, martial arts and many other types of exercise programs all over the world. Anyone who has even the slightest interest in working out has probably tried to do a push-up at least once in their life. Many people will fail on their initial attempts and abandon hope, but fear not, push-up newcomers, if you can’t do one yet, here are some progressions to help you get there.

A novice or an injured person should start with the wall push-up, working to 20 and eventually 50 consecutive reps in each set before moving on. To perform this variant, simply lean against a wall with your toes a few feet away and do the push-up movement from this semi-upright position. 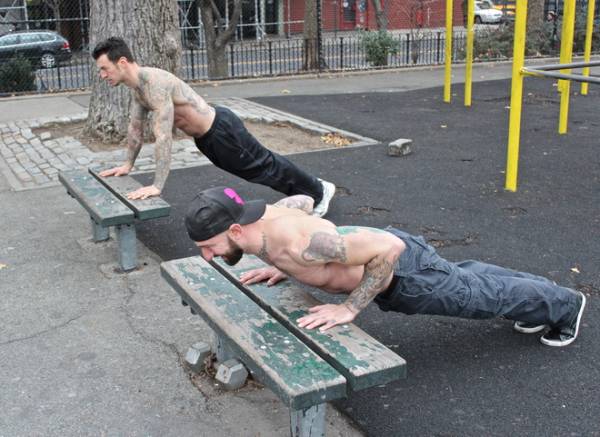 When you’ve gotten to 50 wall push-ups, move onto incline push-ups. The higher your incline, the easier the push-up will be, the lower the incline, the harder it becomes. A high incline eventually becomes a wall push-up and a low incline eventually becomes a regular push-up but there are many levels in between. You can experiment with various household objects or things you may come across outdoors to find ways to incrementally lower yourself toward the floor.

The knee push-up is another variation for beginners on the path toward full push-ups. Knee push-ups involve bending your knees and resting them on the floor instead of your toes. By shortening the length of your body, the leverage changes, making the exercise less difficult. Again, this is a great way to practice toward a push-up without requiring the full strength needed for one on your toes. Once you can do between 20 and 30 knee push-ups, you’ll be ready for the real deal. 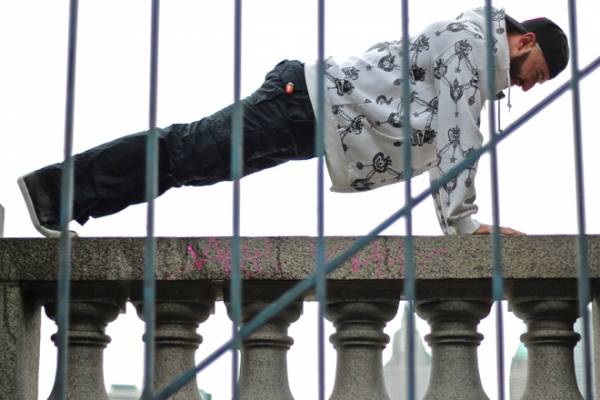 When doing push-ups, I recommend placing your hands just wider than your shoulders (your thumbs should wind up right beneath your armpits). Keep your elbows fairly close to your body and point them back; do not flare them out to the sides. Lower until your chest is just above the floor, pause for a split second and then press yourself back up. Many beginners have trouble going low enough on their push-ups. Sometimes this is also the case for people who’ve practiced for years. Your arms should bend past 90 degrees as measured along the outside of your elbow for the rep to count; the lower the better. If you can’t do a full range of motion with proper form, go back to incline push-ups or knee push-ups.

Depending on your starting point, it can take anywhere from a few weeks to a few years to progress to full push-ups. Be patient and give your body time to adapt. When full push-ups are no longer a challenge, there are still many new ways to progress your training. In a later installment, I’ll be sharing some tips to work toward more difficult variations, including the one arm push-up.

For more information about push-ups, check out my new book, Pushing The Limits! Total Body Strength With No Equipment.