The sport of mixed martial arts (MMA), popularized by the UFC, can be complicated and confusing for new fans. Unlike boxing where there is only one discipline to understand, MMA integrates striking, wrestling, and submissions into one sport.

In previous articles these three components of MMA have been discussed, as well as the various styles of wrestling found within MMA. The different striking backgrounds and skills a fighter may possess, however, have not been discussed.

In regards to MMA, the striking arts can be broken down in three general areas: boxing, kickboxing, and Muay Thai.

An established and lucrative sport of its own, boxing also has a place within the skill set of the MMA fighter. Boxing allows striking only with the knuckles of a closed fist and uses enclosed gloves larger than those in MMA. Boxers can strike to the head or torso, but not below the belt or to the back of the head, back, or kidneys.

Boxing encourages head movement, lightness on the feet, and is highly strategic, hence its nickname, the “sweet science.” Fighters will on occasion “tie up” or clinch, but it is against the rules and will be broken up quickly by the referee. Rounds are three minutes in length with a minute rest between rounds. Unlike MMA, a fighter may be knocked out multiple times in boxing if he recovers before the referee finishes his count.

Kickboxing had its heyday in the United States in the 1970s, but it also spread throughout the world in its various forms. It laid the foundation for MMA and many fighters still train styles of kickboxing today.

Whereas boxing uses two points of contact (the hands), kickboxing uses four – fighters are allowed to strike with punches and kicks. In America, kickboxing and full-contact karate are very similar, but globally there are many different schools within the art of kickboxing, like Dutch kickboxing, French Savate, or Japanese karate styles. In other parts of the world kickboxing may allow strikes and techniques more akin to Muay Thai and rules and regulations vary greatly. 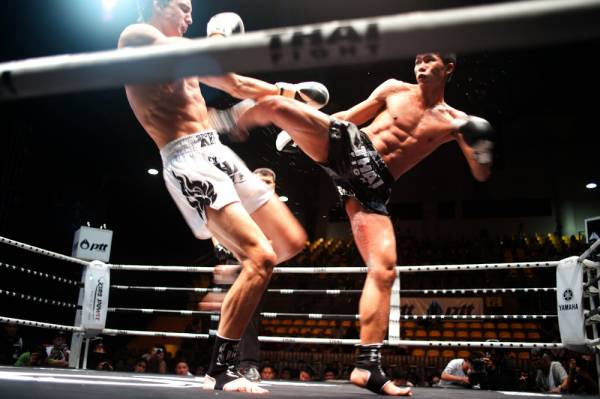 The national sport of Thailand and sometimes considered a form of kickboxing in the broader sense of the word, Muay Thai adds even more elements into the striking game. Known as the “Art of Eight Limbs,” Muay Thai allows punching, kicking, elbowing, and kneeing. Unlike boxing and kickboxing, Muay Thai fighters are also allowed to clinch. The clinch is, in fact, a very dangerous place to be with a talented muay Thai fighter as it allows them full use of their elbows and knees.

Rules for Muay Thai vary from country to country and with different organizations. In general the rounds, judging and refereeing are similar to those in boxing and kickboxing. Traditional Muay Thai fighters will also perform the Ram Muay dance before a fight to honor their coaches.

There are so many aspects to MMA, it can be confusing for a newcomer to watch. With a little understanding of the martial arts behind the sport, however, a new fan can start to discern the strategy and truly enjoy watching MMA.