Do you know who holds the women’s powerlifting world record for the 97-pound division raw squat? It’s not a 44-year-old lady from Europe who squatted 209, although that’s also impressive. Since March 2012, the record has been held by 10-year-Naomi Kutin, squatting almost 215 pounds.

I don’t know about you, but that was surprising to me. When I was given the opportunity to interview the Kutin family, I started doing some research. I continued to be surprised and impressed by their dedication to their religious beliefs (they are Orthodox Jews), their impressive powerlifting background, and their overall dedication to healthy living. But it wasn’t until I spoke to them that I realized what a truly unique and well-rounded family they are, for a multitude of reasons.

Let’s start with the powerlifting part. If you wanted to argue the ability to lift heavy stuff is genetic, you could use the Kutin family as proof. Naomi’s father, Ed Kutin, has been a powerlifter for three decades and set some records of his own. When Ed saw Naomi doing pushups at her karate class, he asked if she wanted to give lifting a shot. Said Naomi, “It was my dad’s idea for me to start, and after a couple workouts I decided to start practicing for contests. I started going up to higher weights and lifting regularly so I could do contests.”

That progress was more rapid than it might sound. During our conversation, Ed described Naomi’s initial decision to start lifting, as well as her first competition, which happened within about four months of each other:

My wife and I discussed it…we researched it a lot and it seemed like a safe thing for her to do. So we talked to her, and she really wanted to do it. We started with very low weights, and she advanced very quickly. This was in April 2010, and there was a contest in August I was going to attend…she was about eight years old and at the time of the contest weighed 79 pounds. There were various youth classes and age groups, but with her doing so well, I started looking at the adult overall records, the lowest weight class being 97 pounds for women. The lowest squat record in that class was 132 pounds…I talked to the president of the Federation, a good friend of mine for many years, and I said, “You know what? I think she actually has a chance to break the overall record! 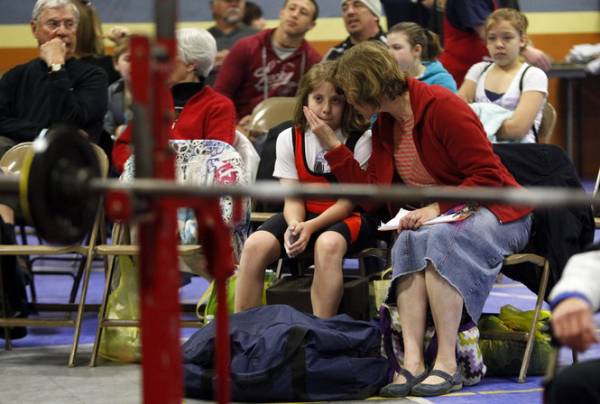 And so Naomi entered her first contest as an adult, with her eye on the overall record. On her third attempt, she squatted 137 pounds. She then took a shot at the national record and squatted 143 pounds. As Ed said, “Basically that’s how she started, and it’s been onward and upward since then.” In March 2012, at the RAW Unity weightlifting championships in Texas, Naomi took the world record for women’s raw squat in the 97 pound weight class by squatting almost 215 pounds.

As a parent of two young children, I also wondered how Ed and his wife, Neshama, felt at Naomi’s first meet. After all, Naomi was only eight years old, in a less than normal environment. “We had no idea the first time, we had no idea how she was going to react to it. The first squat she ever did at her first contest was 99 pounds – very easy for her. But for all we knew, she was going to run up there and then get scared and run away! But she just marched right up there, went right into the zone, like it was the most natural thing for her to be doing. It was amazing.” That ability to get “in the zone” is part of what makes Naomi so successful, said her mother, Neshama. “She’s a very giggly, fun girl. She’s just very fun, but when she goes on the platform, it’s serious because she wants to do her very best. Part of what we think makes her so successful is that she – and it’s hard to describe to people who aren’t athletes – she gets in the zone. She knows how to get in the zone, and then she doesn’t get stuck there. She knows how to get out of the zone and not take it too seriously.”

I asked Naomi to describe her state of mind when she heads up to the platform. Her answer: nothing. “When I get on the platform, I kind of forget about everything that’s going on around me, and I kind of just am in psyche mode I guess. I can’t really hear anybody or see anybody – except for the head judge – I can see and hear him. I think nothing.”

As for Ed and Neshama, they certainly support Naomi’s lifting, but they aren’t pushy. Naomi is plenty good at pushing herself, according to Neshama. “I can tell you absolutely and without a shadow of a doubt that Naomi is her hardest critic. We’re not her hardest critics. It was so funny, because we would tell her over and over again, ‘Naomi, if you want to quit, if you want to do something else, just tell us. This isn’t about us; this is about you.’ She finally said to us, ‘Don’t ask me anymore, because I want to do it and I’ll let you know if I change my mind.’”

Since Naomi’s world record in March, she’s received a lot of attention from the media. So when I asked her what is her favorite thing about powerlifting, I expected to hear something about competition, or winning, or being able to appear on Nickelodeon. Her answer? “That I get to do it with my family.” To my mind, that’s what makes the Kutin family successful. They’ve figured out how to integrate fitness and family and also have a healthy approach to competition. 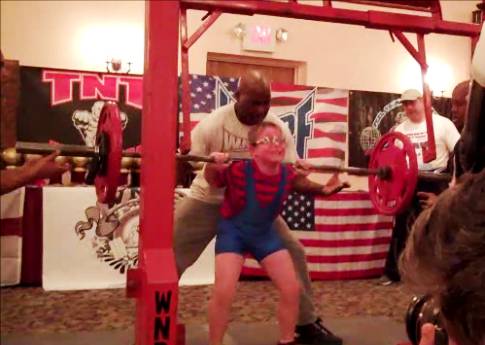 At the end of our interview, I got to meet the youngest member of the Kutin family, 9-year-old Ari Kutin, who is also an accomplished lifter. He introduced himself confidently: “Right now I am a national champion….I plan for that same thing to happen on the world championship.” That meet takes place in October. When I asked Naomi and Ari if they ever have competitions at home, I received a resounding “No.” “We’re the Kutin family team!” said Naomi. “They cheer each other on all the time,” said Neshama. “It’s such a beautiful thing. Because at the end of the day, the lesson we always take away is, at any minute we could decide that we don’t want to do this, or that maybe we aren’t going to capture records. That doesn’t make us less people, it just makes our interests change. We’re still good people and we’re still a family.” That’s a winning approach if I ever heard one.

Learn more about the Kutin family’s approach to fitness and how they balance their religious beliefs with their athletic pursuits next week.