The recent interest in high-intensity interval training has seen the term Tabata applied to many different exercise regimens, but did you know that one of the original studies was performed on a bicycle? The training protocol of repeated twenty-second work periods coupled with ten-second rest periods was first introduced by Kouichi Irisawa. Irisawa was a head coach of the Japanese National Speed Skating Team.

In 1994, Izumi Tabata reported on training experiments that used this protocol on a cycle ergometer. Over a six-week period, his athletes underwent one of the following:

For each participant in the study a linear relationship between power and oxygen demand had been established, so this means that the above percentages can be used to approximate power gains, too. Breathing more oxygen might be interesting, but it’s of little use unless it can be converted into useful work.

It is not necessary to go to the expense of having a full VO2 max test to work out the levels of effort required to undertake this type of intermittent training. An approximation to the power output at VO2 max can be established by a simpler functional threshold power (FTP) test. The FTP test estimates the average power that could be sustained over sixty minutes. A typical way to do this test is to use a power meter on a turbo trainer and work flat out over twenty minutes. You record the average power and multiply this by 0.95 to estimate the power for sixty minutes. (Or you can, of course, do the test for sixty minutes – if you can do that!) The intensity for the Tabata-type intervals can then be established by taking this FTP figure and multiplying it by 1.7.

If you have a power meter or turbo trainer that can measure or estimate power you are all set. As this is a high-intensity exercise regime, you do need to make sure that it is suitable for you and that your bike and turbo are securely set up. A gym towel falling in the spokes during a twenty-second high intensity interval will certainly spoil your day. 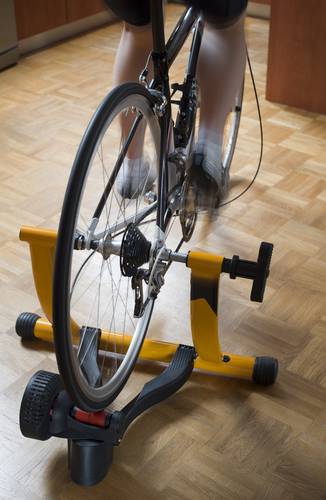 Based upon this study, an exercise program would by comprised of:

Perform this five days per week. On the sixth day, perform thirty minutes at 70% and then do four Tabata-style intervals. Rest on the seventh day. Repeat for six weeks.

If you measure your FTP before and after this program, you should see some useful gains. So, if you are emerging from your winter training and wish to put in some finishing touches before some early events or have only just started to think about training for the year ahead, this might be a simple and effective protocol for you.