Take Control of Your Knee Pain: PFP and Your IT Band

The pain might be in your knees, but they’re probably not the source of your issues.

I can still vividly remember my first serious injury. I was leading a Muay Thai class in some sprints at a local park, when I hit some uneven ground and felt something weird happen to my knee. Little did I know at the time, my knee cap had popped out of the groove it usually glides along, and then popped back in, taking off a lot of the cartilage under it along the way. Called a patellar dislocation or subluxation, the knee cap is pulled laterally out of the trochlear groove.

Most commonly, patellar subluxations cause discomfort with activity and pain around the sides of the kneecap, called patellofemoral pain syndrome, or PFPS. Many people with symptoms of kneecap pain are diagnosed with patella subluxation or maltracking. There are dozens of factors that can lead to these conditions.

Closely tied in with all of this is the iliotibial (IT) band, which is deep fascia (connective tissue) that runs down the outside of the thigh. It begins in the iliac crest in the pelvis, passes through the hip and knee joints, and ends at the tibia (shin bone). To put it simply, IT band syndrome occurs when the IT band gets stretched thin and rubs against the knee (lateral femoral condyle), causing swelling and pain on the outside of the knee.

What Makes the Knee Work?

Several muscles in the leg actuate and create stability in the knee. A few of them are relevant to our discussion here: 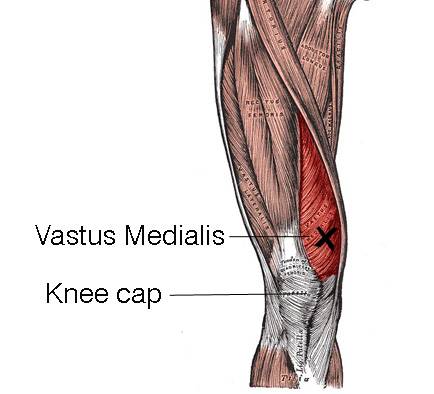 While there seems to be a lack of research on the subject, many physios and specialists believe that when the sequencing of the muscles around the knee isn’t working so well, that this can cause havoc for the tracking of the kneecap. A weak or inactivated VMO allows the other quadriceps muscles to pull the patella off-center.

Similarly, the gluteus medius (and minimus and maximus) are commonly under-conditioned. As a result, when working out or running, the body has to use the TFL as a plan B for pelvic stability, instead of the glutes. But the TFL can’t handle the burden of stability on its own, so it calls upon the IT band for extra assistance.

If we combine a lack of VMO activation with dominant outer quads, a lack of glute activation, and a dominant TFL and IT band, you can see the poor old knee is in for a for a bad time. The leg often ends up internally rotated and usually adducted (legs together).

I read about an interesting lawsuit years ago where a physiotherapist had been taken to court on allegations of lewd conduct. A female patient had come in with a knee problem, and he had asked her to take her pants down to look at her lower back and pelvis alignment. While it is somewhat humorous, it made it quite evident that many people think the site of their pain is also the location of the root cause.

Problems with the ankle or foot can lead to knee problems, as can the hip, pelvis, sacroiliac joint, and lumber spine. All of these influence positioning of the body as a whole, and hence the load and stresses placed on the knee. The end result is that most chronic knee problems aren’t knee problems; they are the symptom, but not the cause. More often than not, it is an alignment issue that places a load and stress on the knee in such a way that eventually leads to pain.

The main culprit is the alignment of the pelvis and lower back. Incorrect alignment of the lumbar spine and pelvis leads to internal femoral rotation and hip adduction, which are often responsible for patellofemoral and IT band pain.

How to Handle Your Knee Pain

So if you’re already in pain, what can you do about it?

Rest and control your pain and swelling.

Take a tip from Bob Newhart. Just stop it! Do not train in pain, and don’t do the activities that cause pain. Ice and anti-inflammatory medications may help.

Get to an osteopath, physiotherapist or a chiropractor.

Ask them to look at your lumbo-pelvic alignment. This is the most important and yet overlooked part in treatment. A good practitioner will look to abate symptoms like pain and inflammation in the knee to aid the healing process, but will also take a deeper look at what is causing the problem.

Take ownership and be proactive with your injury, rather than passing the torch entirely to your health professional. Is your issue acute, or is it chronic? Was there an event that triggered it, like hard contact, falling, or landing badly? Does it hurt when you do particular things or after doing particular things? Do you only hurt when you train, or does it hurt all the time? Is it a dull ache or sharp pain? Where do you feel restricted or tight?

By gaining a better understanding of your injury, you will have a better idea of how to address it moving forward. Get online and read about it, buy books, and talk to other people who have the same complaints. Seek out several practitioners to get different opinions. Remember, most practitioners see things in a pretty myopic way, based on their training and study. As the saying goes, if you’re a hammer, everything looks like a nail. Osteopaths see things differently than a physiotherapist, or a chiropractor, or a knee surgeon, and so on.

Take Control of Your Knee Health

Once you have your pain under control and have a grasp of what caused it, it’s time to take some steps to make sure it doesn’t return.

While massage, trigger pointing, and foam rolling won’t fix the issue, they can certainly help to give relief and abate some of the symptoms. Most people look only to do soft tissue work on the IT band itself, but releasing the whole lateral chain can help. I would suggest releasing the TFL and the whole glute complex as well. I also found rolling the quads effective, particularly the vastus lateralis, along with the groin and adductors. Try foam rolling these areas instead of just torturing your already-stressed IT band.

In addition to rolling, I have a number of go-to stretches that helped release that overworking chain:

Fix Your Programming and Technique

The definition of insanity is doing the same thing over and expecting a different result. When I look back at my training, it broke most of the rules of my current training philosophy. I was specializing and overtraining, doing Muay Thai pretty much daily, and teaching it and Krav Maga around 15 times per week. My weight training program lacked balance and enough posterior chain work.

Lack of pelvic stability is a major cause of knee problems. By having a stability strategy, it may help us avoid having to go back to a practitioner to manipulate us back into alignment, or it may fix the problem completely. The goal is to try and reduce internal femoral rotation and hip adduction by inhibiting the hip adductors and hip internal rotators. We also want to activate the external rotators and hip abductors.

Not all glute exercises are the same. We want the ones that will leave out the already overworked and overstressed TFL and IT band, and exclusively work the glutes. Exercise selection is crucial to correct these muscle imbalances, and most get it wrong. This study showed that gluteal-to-TFL muscle activation was highest for the side lying clam, sidestep/shuffle with a band, unilateral bridge, and both quadruped hip extension exercises with the knee bent or in extension.

All these exercises can be readily found online. Look to do 10-15 reps for multiple sets. Furthermore, ensure that your pelvis is set and you have some pelvic floor activation while doing the exercises. This will again ensure correct alignment so you aren’t doing your corrective exercises from a poor position. Look to avoid lunges, hip hikes, and squats, which all had the lowest glute-to-TFL activation ratios.

It is important to progress to standing exercises, besides that’s where we operate in most sports and real life. Doing the mat exercises above is important, but we also need to integrate them and restore normal movement patterns. Standing lateral stability exercises are your go-to.

Training up those glute muscles will make them more likely to fire when they’re needed. Physio ball hamstring curls, deadlifts, kettlebell swings, and other posterior chain exercises are your new best friends. For VMO activation, don’t discount simple lying straight leg raises, along with the step ups and steps downs that are staples in many rehab programs for knee surgery.

I have also discovered an unusual VMO developer: leopard crawling (think baby crawl with the knees a fraction of an inch off the ground). Not only does leopard crawling work the core like a moving plank, it also helps improve foot function, and I’ve found it to be a surprising VMO developer.

Injuries are just feedback. When I first was hurt, I genuinely thought it was the end of my career in this field. Many people are dismayed about training after their first serious injury, but in hindsight, my injury taught me not only a lot about my mindset and mental approach, but also a lot about my own body, which has helped me help others in turn. Injuries are just a setback. Make sure you turn yours into an opportunity to learn.