I’ve noticed a few idiosyncrasies in my behavior that have the potential to out me as a grappler among people who don’t already know I am one. Read on to see if any of this sounds familiar.

Writers who grapple frequently discuss the “jiu jitsu lifestyle.” You also see mention of it on t-shirts and hear practitioners talking about how much they love it. There is definitely a subculture to BJJ, so much so that some people structure their days around it, building their lives according to their understanding of what it takes to progress.

For some, this restructuring of a life can happen gradually, while in other cases, including mine, there can be more of a leap from a “normal” life to a grappling-focused one. In my case, the pendulum started at the extreme of upwardly mobile thirty-something white collar professional who was a hobbyist at grappling. It then swung to the other extreme of wanderer living out of the trunk of her car, with no address and no day-to-day responsibilities other than training. I vaguely knew I’d eventually have to start making a living again and re-establish some roots, but I was determined to enjoy the hell out of things while I had the chance.

I’ve reoriented the pendulum somewhere in the middle between the two extremes over the course of seven years and a lot of soul-searching, so there are fewer times when it is comically evident that I’ve chosen a somewhat unusual path. Yet, I still have occasion to smile when my worlds collide or when a tendency I have to do X doesn’t really fit in Y context. I’ve mentioned before that I have relationships and obligations that have nothing to do with BJJ, but it is important to me that these co-exist peacefully with my more grapply tendencies.

For the most part, I have a handle on things and know how to act properly. But I’ve noticed a few idiosyncrasies in my behavior that have the potential to out me as a grappler among people who don’t already know I am one. Read on to see if any of this sounds familiar:

First, as often as not, I’ll choose to sit on the floor even if there are chairs available. I’ve been to parties where my first inclination is to settle in a corner cross-legged, even if I’m wearing something nice or holding a glass of wine. I can usually control myself when it’s not appropriate, but I always smile to myself when I picture asking if the person I’m chatting with at a wedding might want to hitch up her cocktail dress or loosen his tie and park it on the parquet.

Second, sometimes I leave the house in the morning wearing the same thing I wore to bed the night before. After an evening of training, I’ll take a shower and then throw on some yoga pants and a t-shirt to sleep in. When I wake up in the morning, sometimes all it takes is a sweater or hoodie and some flippy floppies, and I’m ready for the day. Due to my love of BJJ, I have figured out a way to make a living by working remotely rather than in an office, so I have more time for training during the day. Sometimes I have face-to-face meetings or workshops, and in those cases I dress accordingly (and sit on a chair), but otherwise, I can make my clothes multitask just like I do. 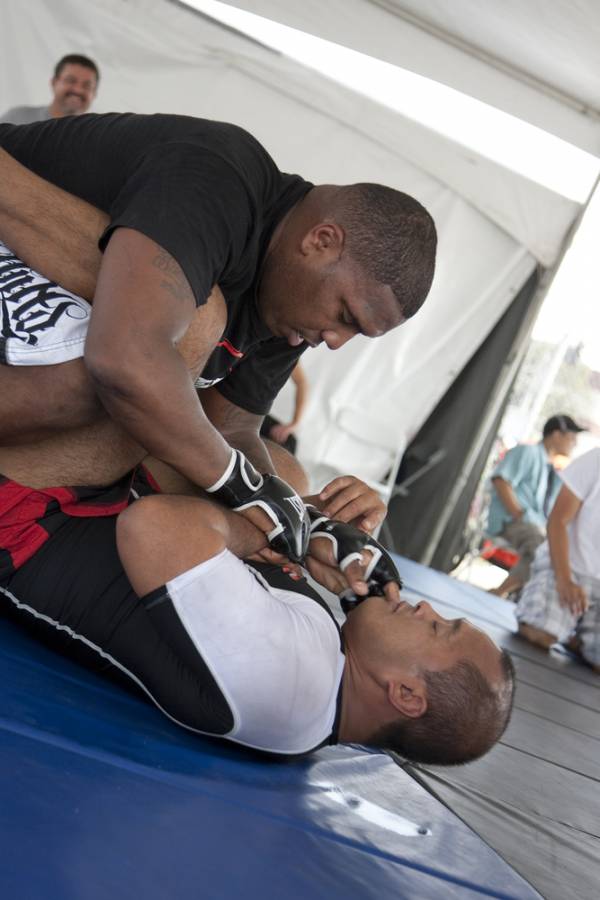 Third, as a result of my professional choices, which enable me to train more often and sometimes in the middle of the day, I am able to dictate my working hours more than some people who work a more conventional schedule. This means I get to plan my errands and appointments during the week, when there is less likelihood that I’ll need to wait, rather than having to cram them in on a Saturday when I’d rather be enjoying my weekend, and when I’m having to dodge the throng of people who are in the same boat. So when friends complain about how crowded the gas station or supermarket was on a Saturday morning, I have to bite my tongue to keep from asking them why they don’t just go at 3:00pm on a Tuesday.

Fourth, my day gets started later than many. Back when I was sleeping on the couch of a grappling academy, I sometimes didn’t finish training in the evening until around 10:00 or 11:00, sometimes didn’t eat dinner until midnight or 1:00am, and sometimes didn’t get to sleep until 3:00 or 4:00am. I’m not on that schedule anymore (though I know some people who are), but the inclination to train until 9:00 or 10:00pm and take a few hours to wind down is still strong, which pushes back my bedtime, which pushes back my wake-up time. I’ve learned the hard way not to complain about those few times when I have to get up at 8:00am or, God forbid, even earlier.

There are tons of other telltale shibboleths that have at one time or another clued non-grapplers in to my lifestyle choices. Many people have received emails from me at 3:00am, finding out subsequently that I was waiting for an early morning flight to somewhere to grapple. (See item number four to understand my saltiness here.) I don’t exactly look like I have lima beans for ears, nor do I have difficulty even fitting the Bluetooth earpiece in my ear, but I have a little bit of the cauliflower. Lately I’m a little gimpy because of my sore knee. And on and on and on.

How do your choices related to a grappling lifestyle play in “real life?” Are there any telltale signs – a habit or a piece of clothing – that reminds others of your love of the ground game? Post them to comments.