The 1st Pull In Weightlifting: Go Fast Or Slow?

The first pull in the snatch or clean tends to either be slow or fast, so it is all about the transition when it comes to lifting heavy weight.

As I write this, I have just returned from another Canadian Senior Weightlifting Championship. While I was there, I spoke with a former training partner who is now perhaps the world’s foremost photographer, Rob Macklem of Victoria, British Columbia. He was there with his trusty camera and we were soon engaged in a discussion about the subtleties of our sport.

We had noticed some lifters move the bar off the floor slowly, while others pulled faster, but all pulled as fast as they could once past their knees. This observation led to a discussion about the transition between the first and second pulls in the snatch and clean.

These two lifts are performed in a similar manner. The major difference being that the snatch is pulled with a wider grip than the clean. Yes, there are subtle differences, but the technical niceties are all pretty similar.

Hand width on the snatch … 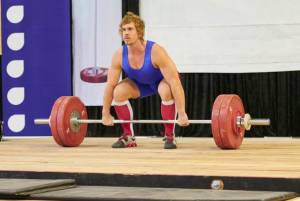 I will concentrate on the pull up to the time you jump under the barbell. This is composed of a first pull and a second pull as described by most current-day coaches.

“The one subtlety I will go into is in regard to time of execution and the speed differential between the first and second pull.”

This transition has a number of names depending on the various coaches’ preferences. It may be called “the transition,” “the readjustment,” “the shift,” and most commonly “the second knee bend.” Coaches also differ in their opinion about where this transition actually belongs. Some see it as separate from the first and second pulls, others contend it is part of the first pull, and the rest place it is part of the second pull. All have their reasons, but I will not go into these subtleties here.

At the other end of the spectrum, the fast pull advocates favor a quick start in order to add as much momentum to the bar as possible, thus making the further increase in speed in the second pull easier. Again this sounds intuitively correct, but is it valid?

In trying to answer these questions we can point to lifters who have set world records with all varying speeds. In any case, though, it is during this brief transition zone where the first-to-second pull speed differential must be made up. The faster this change of speed can be accomplished, the more weight can be lifted. 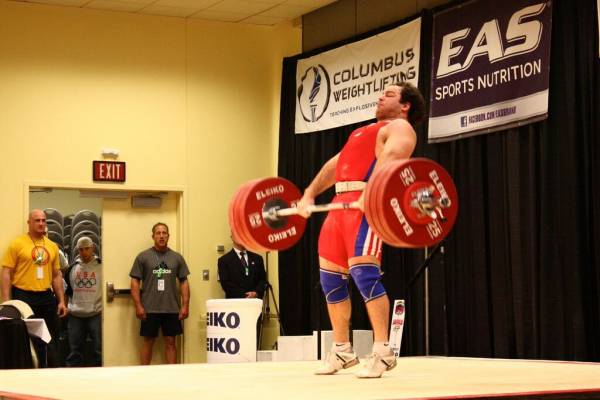 A fast transition is the essential component of lifting heavy weights.

Let’s take a closer look at what must occur during this transition between a slower first pull and a faster second pull. There are several factors that must be examined. One is the distance the bar travels in this transition phase, but this is more or less standard.

Another factor is the amount of time a lifter has to move through the transition zone. Since the distance is standard, the faster the transition can be made, the sooner the second pull can be started. That means more weight can be lifted as a slow transition limits future speed.

The last factor to consider is the amount of force you must apply to produce the speed differential. Here is where things get more complicated:

“Each lifter will eventually find his or her best combination of first and second pulling speeds.”

We now are left with a quandary for the lifter to solve. Remember, the bar has to keep moving, but there are only so many nanoseconds during which the full speed differential can be made up. To appreciate this, let’s go to extreme examples. Deadlift a weight and then once in the top position of the deadlift, try to give the weight enough speed to complete a clean. This will be difficult even with a light weight. After this experiment, you will appreciate the need for giving some speed to the first pull.

Now try the experiment at the other extreme. Try to clean a light weight with as fast a first pull as possible, and then try to pull even faster in the second pull. The bar certainly is moving quickly in the early phase, but it is then very difficult to give it even more speed after you pass the knees. There simply is not enough time to accelerate the bar when it is already moving quickly.

The obvious answer is a moderate difference in first and second pulling speeds. This is generally worked out by the lifter over the course of his or her training by trial and error. Each lifter will eventually find his or her best combination of first and second pulling speeds. This will be different with different lifters for a number of reasons – body proportions, neurological ability, and probably many others.

Weightlifter Vasily Polonikov training his clean pull before the 2014 Olympics.

What is beyond debate, though, is that the champion lifters are those who are naturally able to negotiate the transition phase as quickly as possible. World record holders are able to execute a fast hamstring contraction followed by a fast triple extension. While some factors are trainable, the rest are probably genetic.

This issue is another subtlety that makes the study of the Olympic lifts fascinating. Hopefully Rob and I can discuss this more next year.