The Dip Error You Don’t Even Know You’re Making

Learn to change direction quickly, without hesitation, and you will be able to jerk anything you can clean.

I have noticed a basic error that many newcomers to weightlifting, both young and old, are now making. The problem occurs during the dip portion of the jerk, in the clean and jerk event.

Ideally the lifter, after cleaning the weight, first sets him- or herself and then does a fast dip, followed by an even faster change in direction to facilitate the driving of the bar upward. The problem lies at the bottom of the dip when the lifter starts to change direction and drive upward.

A Faster Dip Is Better

The bottom of the dip is where you go from an eccentric contraction of the quadriceps into a concentric movement of same. In the dip, we store energy in the quads for later release. And by later, of course, we mean only a split second later. We take advantage of the stretch reflex build-up in this action to drive the bar overhead.

The faster this action is accomplished the better, as a lot more upward force can be produced. It should be remembered, though, that this quick reversal of direction places significant stress on the quadriceps tendons at the knee joint. Younger people naturally have more ability to withstand this extra tension, as we will see shortly. We call this ability reactive strength.

Another important thing in the dip is that the athlete must have total commitment to the upcoming jerk movement. Any tentativeness will result in a loss of energy for the jerk drive. It has to be recognized, though, that the jerk is always attempted after a clean. The lifter may have been shocked by the difficulty of the clean and will therefore be put in a bad psychological position as he or she thinks about starting the jerk.

The fault I see most in recent years is that of hesitating at the bottom of the dip. The lifter stops suddenly and holds the weight in what is essentially a quarter front squat. The time held might be a full second. Then the lifter realizes that he indeed has to jerk the barbell, so the upward thrust is made as vigorously as he can.

But his effort is usually not enough to properly jerk a heavy weight since the force that could have been obtained in a quick jerk is no longer available. Just as important, there is also no force left in the elasticity of the bar that would also have helped the lifter. He is trying to jerk a heavy weight with a dead bar and far too little initial drive. The result will be a missed jerk.

Why does this hesitation dip happen? The problem is usually one of insufficient commitment to the lift. The lifter is intimidated by how heavy the weight feels after a heavy clean and starts to doubt whether he will be able to jerk the weight. Too much respect for the bar is given, resulting in a downward portion of the dip that moved too slowly and perhaps even came to a complete stop at the bottom. 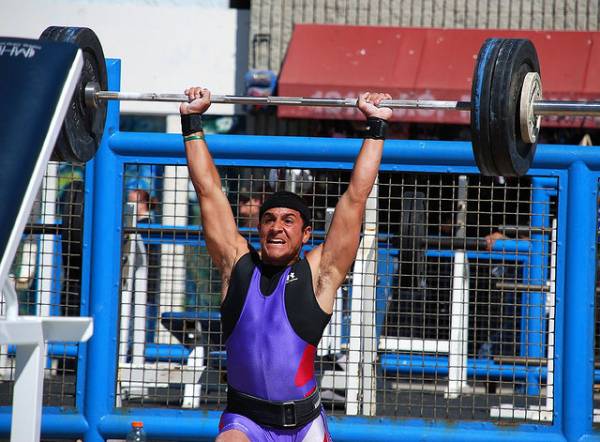 The Problem for Novice Lifters: Sense of Commitment

This error is most frequently seen in novice lifters. Their technique is not yet perfected, and they still possess a fear of the weight and an incomplete sense of commitment to the lift. Oddly, the novice lifter may still be successful in spite of this error. Because novice lifters have not developed enough strength, their attempts might be so low that they could still successfully complete jerks even with a hesitation dip.

The problem will show up more, though, as the bar gets heavier. At that point, the lifter will have to either learn how to dip properly or be content with low totals. Fortunately, confidence will develop with more training time so the problem should eventually disappear.

The Problem for CrossFitters: No Eccentric Movement

This dip dilemma also shows up with a lot of CrossFit converts. These lifters relate the jerk to thrusters, where there is no dip. In these athletes, you will see there is no pause between the clean and the jerk. The bar is driven off the shoulders immediately upon coming out of the clean. No dip at all means no eccentric movement before the drive. The only solution for a serious CrossFitter is to learn to jerk properly under coaches like Bob Takano or Sean Waxman.

There is one other area where the hesitation dip appears – older lifters in the masters age groups. You might think these people would know how to jerk after so many decades in the sport. And they do. The problem is they no longer can dip comfortably.

Earlier I mentioned the extra force jerking puts on the quadriceps tendons. As lifters age, the quad tendons are less capable of handling the forces they could when the lifter was younger. Because the jerk is quite hard on these tendons, older lifters will suffer. They feel the tension much more, to the point they have little choice but to take it easy on the jerk dip. A ruptured patellar tendon is no fun. This is another of the frustrations that has to be accommodated if lifters are to continue their favorite sport into their later years. Compromises just have to be made. 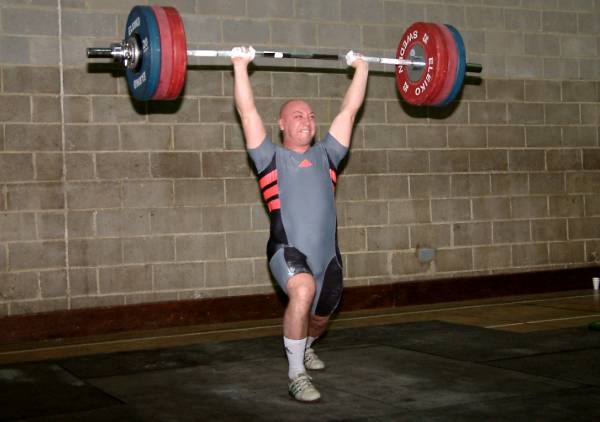 But most of you reading this are not masters lifters, you are younger. You may not have the experience yet to give everything to the jerk, but you can at least learn, and it’s not that difficult. The jerk is where you can move the heaviest weights overhead and that is why it is so satisfying. Jerking comes easy to some, while others need more practice. They have to study the movement a bit more to master it.

But, as I said, it’s not that difficult even then. Learn to change direction quickly and you will be able to jerk anything you can clean. The reactive strength utilized in this movement is the essence of what the Eastern Europeans call speed strength. It is what distinguishes the Olympic weightlifter from other barbell practitioners.