Traveling across the world has its ups and downs, and my recent trip to Copenhagen was no exception.

I finally arrived in Copenhagen for the 2014 Worlds Masters Olympic Weightlifting Championships. Saturday morning I woke up and I was stiff as a board. So off to the training center I went. Morning workout was what I call a simple circuit, a series of exercises that work the joints from shoulders to knees, putting the body through a large range of movement and trying to get some of that stiffness out. Ah, by the end of my forty minutes I was feeling pretty good.

While I was doing my simple circuit, I watched flabbergasted as these larger fit-looking guys struggled with 60kg front squats. They left the bar on the rack loaded (if I can use that term) with 60kg. I decided that since I was feeling so good I would do a few front squats. I picked the bar up and thought, “My God this is light, what the heck were they struggling with this for?”

The next training session was the next day, and I thought I would start off with clean and jerks. I grabbed the bar that I used doing front squats, only to discover that it was a 10kg bar and not a 20kg. All of a sudden yesterday’s workout was not so exciting. I played around with 80kg and 90kg power clean and jerks and left the session a little bit more discouraged than I would have liked.

I got back to my hotel room and I got hit by the “pee bug.” Every half hour for the next sixteen hours I had to pee anywhere between 700mL and a liter. I know this because I measured it. I watched myself shrivel up. I felt like a prune. I tried to hydrate during this process, but by the time it was over I was down to under 80kg, which was quite a drop since Saturday I weighed in at almost 85kg. Same thing happened to me in Poland 2010. Maybe I am allergic to traveling to Europe.

I could barely do anything for the next two days, so I worked on eating and hydrating. It worked, and I weighed myself at the end of every day and I was up almost a kilogram. Tuesday I weighed in at about 82.5kg, so I decided to do a workout. I started with snatch, hanging around with 40kg, working my way up slowly, and finally doing a set in combination with hang and floor with 90kg for three sets. It didn’t feel bad, especially from the hang, so I did clean and jerks at 60kg, 80kg, and 100kg. That was followed by power clean and jerk two times with each weight, moving to 110kg. I finished with two sets each of power clean, front squat, and jerk. Again, it didn’t feel too bad under the circumstances.

Wednesday was the competition. My wrist was a little tender from the previous day’s workout, so I got the medical staff to tape it up. The medical staff at the masters was second to none. Warm up went very well. I was using a strap, which I normally never do, but the bars on my tender little hands would shred them if I didn’t.

I was a little cocky on my first attempt snatch at 100kg because of my last set in the warm up, and didn’t finish my extension or overhead movement with authority. A miss. Second attempt, 100kg, was a fairly strong high pull. It snapped easily into the lockout, no problem. Took 109kg as a third – a bit ambitious, but what the heck. I pulled okay, but hit the bottom position really hard, dropping the bar out front. I think I did my groin in. 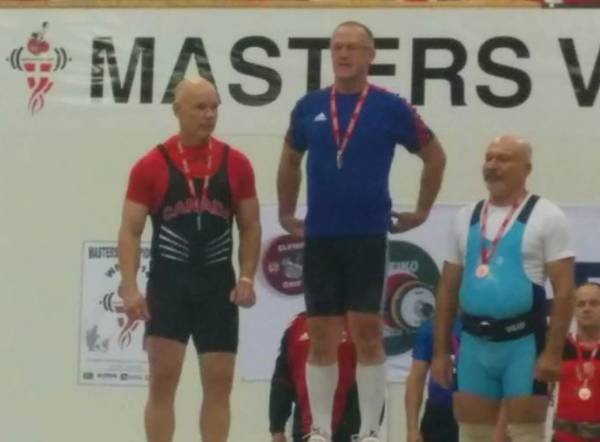 During the warm ups for clean and jerks, I realized I was right. I couldn’t stand up with 40kg as my groin was in spasm. I decided to power clean all my attempts. Took 60kg, 80kg, and 100kg in the warm up room on the power clean and jerk. I had initially put 120kg as a starter, but I dropped it to 115kg, which went easy. 120kg was the same. I took 125kg and it was an easy power clean, but the platform was a little off and I jammed my back leg into a seam, twisted my ankle, and dropped the weight out front. 220kg total.

It was very disappointing. I placed second but should have been in a position to challenge for the lead. Joffrey only totaled 230kg to win but did make a strong effort in the clean and jerk with 137kg.

Terry Hadlow got started in Olympic weightlifting in 1970 and is the only Canadian to have competed in senior nationals in five different decades – 1970s, 1980s, 1990s, 2000s, and 2010s. Follow Terry’s journal here to learn about his approach to training and competing.