The 3 Best Single Leg Exercises for Core and Lower Body

Short on time? Single leg exercises are a great way to build lower body and core strength at the same time. Here are my three favorite one-legged exercises I use with my clients.

If you’re like me you just don’t have enough hours in the day. Because of that I am always looking for ways to minimize my gym time. That doesn’t mean I am going to skimp on a workout, but it does mean I want as much as possible from as little as possible.

In the same way that a single arm swing can be of enormous benefit in the upper body, single limb training for the lower body can be just as great. Mike Boyle has become known as the single limb guy, although I had already been exposed to the idea by Ian King more than five years before, and at some point many old school muscle heads will have been exposed to single limb training through lunges and step ups. In other words, the concept has been around for a while.

Let’s quickly review the various stances in which we can perform legwork:

There are only three choices, no more, no less.

Traditionally the strength and conditioning world has stuck to exercises such as the squat, deadlift, power clean, and the like to teach athletes to be strong. There’s nothing wrong with these exercises and there’s many years worth of good results to show that they bring about a good result.

But despite these exercises reputation as the kings of the jungle, they don’t fit everyone’s purpose. For me one of the big things I’m usually concerned about with my clients is their body weight. I train a lot of combat sports competitors who are forced to watch their weight due to their weight classes. The big lifts like the squat and the deadlift make adding body weight very easy. This can make getting ready for a fight or a tournament harder, due to having to cut more weight.

Single leg lifts don’t suffer from this same problem. Even when you are going all out and working as hard as possible you really aren’t using much weight in comparison to a similar exercise performed on two legs. Reading Erwan Le Corre’s philosophy about needing high level locomotion skills before we seek to add manipulative skills or Gray Cook’s philosophy of needing movement before stability before strength, you can see how single leg training fits right into both of these modern highly functional training philosophies.

Looking back at my original goal about not wanting to spend unnecessary time in the gym, there is one thing about single limb training that really stands out. While there are machines these days that allow you to train muscles such as the hip abductors in isolation, the problem with these machines is that they allow you to do something your body isn’t designed to do. The hip abductors are not typically used as prime movers; instead their primary role is that of a hip stabilizer. While the term functional training is overused today, the role of functional training should be to get the body to work better when we ask it to perform. That means we should train stabilizers to stabilize, not act as prime movers.

The act of standing on one leg and not allowing oneself to pivot around the foot requires control at the hip. Try this test: stand on your right foot and take your left off the ground. You should be able to keep your hips parallel to the ground while maintaining the same orientation. If you rotate to your left you have weak hip external rotators and they’re failing to stabilize you. That rotation, if left unchecked, could lead to an ACL tear under a high stress maneuver, like a rapid change of direction or landing on an unstable surface.

My definition of core training is anything that teaches me to prevent my spine from being flexed or rotated. That means an exercise that teaches me to stand on one leg and not rotate is a core exercise. That also means all single limb work is core work. Just chew on that for a second. That means we can virtually eliminate all core ability work from a training program just by the inclusion of some single limb work – a huge time saving bonus. 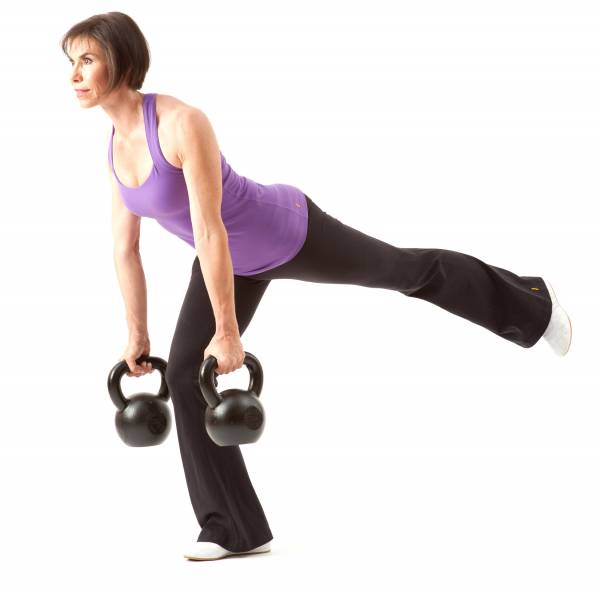 A real deadlift has action at the knee as well as the hip. This means we need to replicate this in our single leg version and the hips need to drive down and back. The front leg will bend to accommodate this and the torso will angle forward. For loading you can experiment with holding weight on the same side as the working leg, on the opposite side, or in both hands at the same time. Each will give a slightly different response, but all are useful.

The keys for me are to think two-legged deadlift. The back must be flat and tight, shoulders packed in and all the slack taken out of the body. The non-working leg should be pushed straight back as if trying to push a wall away with the heel – don’t just leave it slack or point the toes. This push back action gets you some hip action on the other side and is a little extra gem in there that many miss.

If a pistol squat is a single leg squat with the non-working leg held in front, the easiest way to think of the King deadlift is to think of it as a single leg squat with the non-working leg held behind. This is a phenomenal exercise and takes that single leg deadlift to the next level, as it requires more hip action and a deeper knee bend, which means more activation. If your idea of fun is not being able to sit without pain for a few days at a time, I suggest adding in five sets of five of these to your leg days. Make sure to go deep – the back knee should almost touch the ground. And don’t worry about torso angle too much either. Ian King says that the greater angle of lean forward gets you more hip extension on the concentric phase, so it actually ends up being a benefit.

Begin lying on your back with one foot on the top of a Swiss ball. The non-working leg should be bent at the hip and the knee, as if trying to do a high knee running action. Bridge up so only your upper back and head are on the ground. Maintain that straight line from knees to hips to shoulders, and curl the ball towards your glutes. You’ll find it very hard to keep that bridge while performing the leg curl and don’t be surprised if your hamstring cramps savagely. That wobbling all over the pace you experience is a lack of stability and will go away soon enough once you get stronger.

These three exercises form the basis for much of the legwork I give clients. Whether it be for strength, sports performance, or rehab, these three exercises will go a long way to building a strong foundation that your upper body or sports training can be put on top of.