When I first started Olympic weightlifting, there were very few choices for weightlifting shoes. It was basically Adidas…or Adidas! And they were NOT cheap.

And for GREAT prices!

Why Wear Olympic Lifting Shoes At All?

On the Internet, everyone is a critic. One of the major criticisms of Olympic weightlifters and powerlifters is that they are far too reliant on gear and equipment. We wear specialized belts, shoes, straps; powerlifters have suits and even more specialized belts; and we’re even hyper-finicky about what types of bars we’ll lift on, or the types of weights we’ll put on those special (and expensive!) bars.

So, what about building “natural” strength?

That’s a common (and valid) question coming from people with a CrossFit background. CrossFitters are particularly fond of all things “paleo” and getting back to the earth, or what have you. That’s great, and I support that from the standpoint of maximizing your raw potential and being healthy.

Cyclists need a bike, pedals, and that awesome spandex. Olympic weightlifters need the right shoes because:

If you aren’t serious in the slightest about the Olympic lifts, don’t buy shoes. That would be silly. But if you want to see what you are capable of on the snatch, the clean, the front squat, and the Olympic back squat, then you really do need them.

Not having Olympic weightlifting shoes on while snatching is like a cyclist not having pedals on her bike.

The truth is, all five of these options are great. And I haven’t even covered all the possibilities. These five shoes just happen to be the ones that end up on the feet of my own lifters the most often, and so I feel confident commenting upon them.

Before you jump the gun and buy your first pair of weightlifting shoes, you’ll need to understand something about how they are sized.

While many shoe companies will tell you their shoes run “true to size,” that’s not very helpful, given that tennis shoe sizes are NOT standardized!

However, dress shoe sizes ARE standardized. I strongly suggest if you don’t know what you wear in a MEN’S dress shoe that you go to the nearest shoe store and try some on until you figure it out. It is often different than what you wear in sporty shoes.

Even you ladies will be buying a mens size – sorry, most of the companies just don’t carry specific women’s sizes. 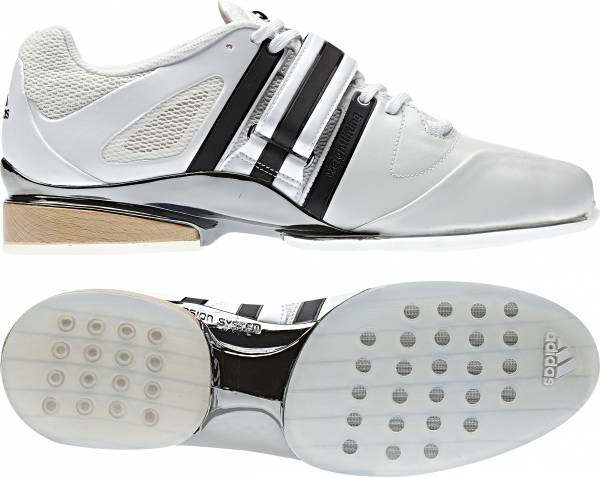 The Adidas Adistar line is one of the best lines of Olympic lifting shoes around, they will last you for literally a decade, and are built by people who’ve been making weightlifting shoes for a LONG time.

Many champion weightlifters wear these shoes. You could do worse.

The shoes are well built, come in variety of cool colors (the 2011 series looked like they were straight out of the movie TRON!), and they DO have a women’s specific version. Many of my lifters wear this brand of shoe and love them. 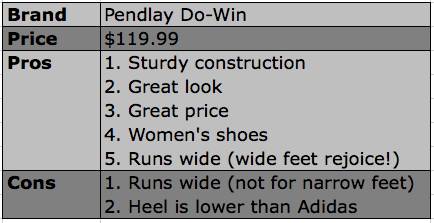 The heel could be a plus or a minus depending upon what you are looking for.

The Rogue Do-Win is basically the same shoe as the Pendlay Do Win, only in a different style. And that style is black suede!

Risto Shoes came out of nowhere a few years ago and became a huge player in the weightlifting shoe market almost over night. Why? Custom colors!

Sure, there are other great things about the shoes, including the fact they are each handmade (you can search Youtube and see a cool video about it). But it was marketing genius to come out with a Baby Pink pair of Olympic weightlifting shoes. They sold like firewater, and continue to.

Disclaimer: My shoes are Risto’s. Unfortunately, they aren’t the pink ones. Custom colors cost more and are only available periodically. 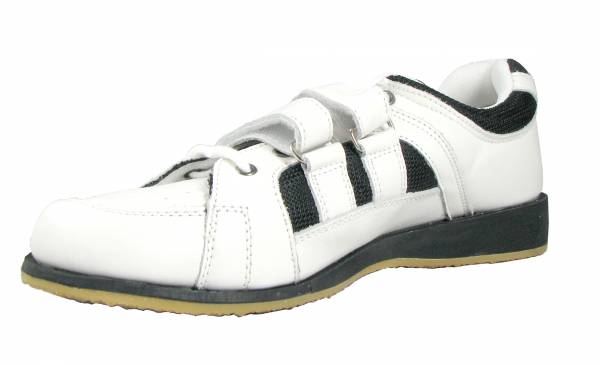 The last one is dear to my heart because they were the first pair of weightlifting shoes I owned. Back then, they were rather cheapo, had what looked like a cork heel, and only cost about $60 bucks! Now, the VS Athletics model is all grown up, is robust as hell (they’ll last FOREVER), and still the cheapest serious shoe on the market…by far.

If you aren’t looking for flash, but are only concerned about high function and value, these shoes are great. (My lifters like to add colorful laces to spice them up!)

The Adidas “powerlift” shoe is poorly named. It is a stripped down weightlifting shoe that you would more properly call a “CrossFit” shoe. Adidas doesn’t call theirs that, but that’s the market, and the whole reason they made them. 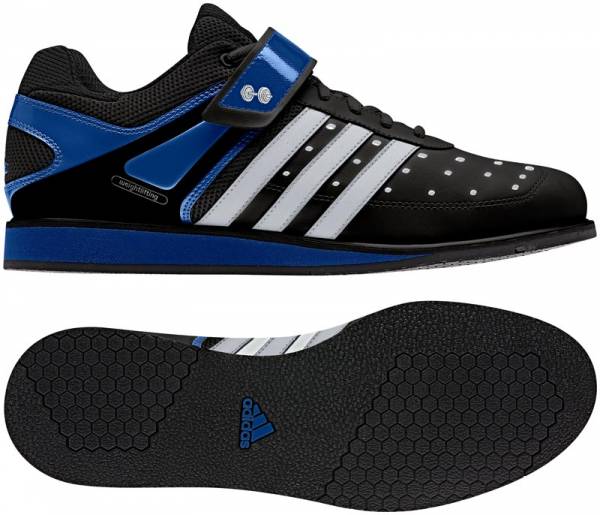 If you do CrossFit, sometimes you just don’t need your Oly shoe to be THAT sturdy, because with that robustness comes extra weight. A weightlifter doesn’t care. But, if your WOD requires you to combine snatches with muscle ups, 10 rounds for time, that extra weight adds up FAST. The lightweight nature of these shoes makes them awesome for combining the Olympic lifts and front squats with chin ups and other bodyweight monkey business

While I’d never advise a weightlifter to use this shoe, if your thing is CrossFit, and you just want a shoe that has a heel and some added stability, this is a good choice.

If you are at all serious about learning the Olympic lifts, then you honestly have no choice. Grab a pair of Oly shoes! Even if you aren’t that serious, and are only starting out, there are some low priced, but high quality, options available.

With the level of choice you have available to you, there isn’t much excuse for not having a good pair of weightlifting shoes on while you’re snatching, cleaning, and squatting.