The 5 Best Plyometric Exercises for Runners

Runners who perform plyometric exercises run faster and more economically than those who don’t.

The running community tends to advocate training principles from the Dark Ages. Okay, maybe not that old, but not much more recent than the 1980s. Let’s take a look at what most runners do to train:

Rarely do most runners lift weights and almost never do long-distance runners perform plyometrics. This article will touch on why running and stretching isn’t enough and why adding jumping exercises will make runners faster and more efficient.

“[L]et’s get one thing out of the way first: stretching is not a good idea for most runners.”

Yet, when asked what they do to supplement their running, most runners will say either, “I stretch,” or, “I should stretch more.” But why stretching should not be used is a topic for another day. Today we’re going to discuss why plyometrics should be used.

Plyometrics are typically used to improve power and speed for sports that rely on those qualities. Sports like football, basketball, and sprinting. Unfortunately, this mode of exercise has been so pigeonholed that its benefits to other sports has been ignored.

Plyometric exercise, by definition, is any exercise that involves a stretch immediately before an action. This is called the stretch shortening cycle. During this stretch, a few things happen, but one of the most important is the storage of energy. 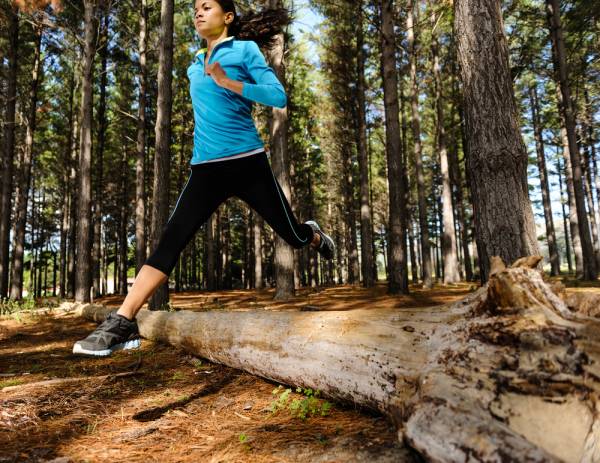 Think of a rubber band. Before shooting a rubber band at a friend, you pull its ends apart – you stretch it – to build up energy in the band. The rubber band is then released – takes action – and it hits your friend. The body works the same. Each muscle is connected to a bone by a tendon. The muscle, and especially the tendon, store energy when stretched. When the resulting action occurs, it happens with more force or speed or explosiveness than normal.

An example of this during a sport would be pitching a baseball. The arm moves backward (stretch) and then immediately comes forward (action). Likewise, when jumping up, nobody jumps from a standstill. The same stretch to action cycle repeats. A quick squat (stretch) is followed immediately by the jump (action).

“Research has shown that middle- and long-distance runners who perform plyometric exercises run faster and more economically than those who don’t.”

The ball is thrown faster and the jump is higher when each is immediately preceded by a stretch. So the same thing should happen with running, right? The answer is yes. Research has shown that middle- and long-distance runners who perform plyometric exercises run faster and more economically than those who don’t.

The Journal of Strength and Conditioning published a study in 2010 from Canadian researchers that showed a significant improvement in the cost of running when performing plyometrics for eight weeks. A 2013 Spanish study in the Journal of Strength and Conditioning Research demonstrated that performing only two days per week of plyometric training improved running economy, speed and 3km running times. Another study, also from Spain and from the same journal in 2014, showed significant improvement in running time.

These exercises were chosen for their ability to improve explosiveness and running ability. Each exercise should be performed twice a week. Doing one set of ten the first week and two sets of ten the second week (and all subsequent weeks).

The focus of this exercise is to increase a runner’s ability to produce as much force as possible. Producing more force increases running speed.

The focus of this exercise is to increase a runner’s ability to produce as much force as possible, this time in a (mostly) horizontal direction.

The focus of this exercise is to increase a runner’s ability to produce as much force as possible, this time with just one leg at a time because at no time when running are both feet on the ground.

The focus of this exercise is to decrease the amount of time a runner’s feet are in contact with the ground. The less time on the ground, the faster the runner.

The focus of this exercise is to combine all of the previous characteristics into a running-specific exercise. Maximal force is produced in a minimal amount of time in a horizontal direction off one foot at a time.

So get out there and run, but make sure you add plyometric training to improve your running speed, economy, and efficiency.