The Art of Standing Still

Before I opened my own martial arts school, I used to practice martial arts at a local elementary school on weekends. I would bring my training weapons and other equipment and choose a secluded area of the school where I thought I could practice without interruption. I would usually go to the middle of the soccer field.

As part of my training, I would start by standing silent and motionless in a series of positions, usually with my eyes closed. Standing with my arms embracing an invisible sphere, I would get lost in the moment. Deep diaphragmatic breath calmed my mind and body. I used imagery to visualize internal energy moving through my body like a golden wave, as I moved deeper into a meditative state. I imagined my body becoming stronger and full of energy.

Time seemed to slip away. Often, I wouldn’t realize the children’s soccer league had arrived. When I emerged from my blissful meditative state, I was suddenly surrounded by ice chests, lawn chairs, and several minivan loads of kids running around the field, and sometimes even around me. Parents would either ignore me completely or stare at me, trying to figure out what I was doing. When asked, I always responded, “Exercising.” They would look at me strangely, and with their head tilted say, “Really? Looks like you’re just standing there.”

Most people think of exercise as movement, but there is a great form of exercise based on standing still and holding a position or series of positions for a period of time. This type of exercise is called standing qigong. I once explained standing qigong to a friend in this way: “Standing qigong has all of the benefits of yoga, but you don’t have to tie yourself up in knots.” That is an oversimplification, but it communicates that standing is both mental and physical exercise all on its own.

Qigong means “energy-work.” It is a practice of working with your energy using both mind and body. People are often drawn to such practices when they want something more than physical exercise, or when they are dealing with a physical or psychological issues like stress or anxiety, as it can often help both.

My favorite type of qigong is the standing variety. Standing qigong involves standing in a specific posture for a period of time. It sounds simple, and it definitely has less moving parts than a 108-part Tai Chi form, but it is still challenging. The great thing about standing qigong is that it requires no equipment, fancy clothes, or special location. You can practice anywhere. That also means no excuses for not doing it.

The following is my favorite standing qigong posture, and a great introduction to the practice:

This posture provides a frame for your body to work from; a base for your motion. It has so much utility that you may want to keep using it even after you have a whole catalog of postures to choose from.

The external aspects of the posture are the first concern when starting your practice. Once you have the form down, you can delve into deeper concepts, such as diaphragmatic breathing and visualization. Look for future articles on these refinements. 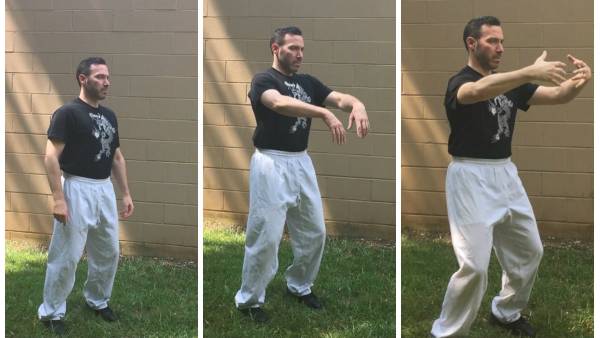 I have students who come in and do all the classes for a few days, and then I don’t see them for a month. They don’t see as much benefit as the ones that maintain a regular practice. In everything I have ever done, persistence and consistency are the keys to success, and qigong is no exception.

Start standing with intention now. If you practice this form for 5-10 minutes a day, you will start to feel the benefits, including a stronger foundation, more energy, and a better mind-body connection. What? You don’t have five minutes? Okay, then do it for two minutes. Not even two? Then do one. That may not sound like enough time, but as with all things, the key isn’t how long you do qigong, it is how often.

Want to know more about this martial art?

Qigong: The New (Ancient) Way of Improving Health and Performance