What is the best shoulder exercise?

Whether you’re looking for performance through strength or power, or rehabilitation through patterning, the kettlebell one-arm press covers so many bases. This exercise could quite simply be the best thing you can do for your shoulder.

I’ve used this drill to offset the high-volume throwing, spiking, serving, and contact of international handball and volleyball players. Even if you’re a recreational athlete, you can reap the benefits on posture and shoulder girdle strength. When the chips are down, I’ve found it to be unbelievably restorative. Athletes who do the one-arm press regularly in their programming discover more hitting power and durability.

The one-arm press is great because it meets the following four criteria:

The one-arm press will improve your shoulder strength and health, whether you’re a pro or an amateur. (Photo courtesy J Perez Imagery)

The start and finish positions of the one-arm press are safer than other favoured shoulder strength exercises, such as the front and side raise. The long leverage of weights lifted in front and side raises often causes the scapula to tip away from its stable position at the start and finish of the movement. That’s like allowing a crane to come loose from the ground before lifting a large building. Front and side raises cause more trouble with shoulder blade positions than any other exercise, affecting the muscles that attempt to hold the shoulder to the neck and trunk, the trapezius and rhomboids.

The scapula’s main job is to support the arm. It can move freely to position the socket appropriately for the ball of the humerus to be supported. If a scapula “wings” (the medial border comes away from the rib cage, or tips forward), or the medial/superior part of the scapula gets higher than the lateral part, this places the socket in a position that limits elevation of the arm. This is not appropriate, nor is it stable. In this position, the scapula has lost its appropriate alignment.

More About Shoulder Anatomy and Care:

Contrast that lack of alignment with the positioning offered by the one-arm press. In the one-arm press, the scapula is dynamically stable. This means it displays unrestricted freedom of movement in a supportive situation while also maintaining appropriate alignment. The movement begins with the kettlebell in the rack position, just in front of the shoulder. The kettlebell rests on the upper arm, outside the fist. The elbow faces forward. The palm side of the hand points towards the face. In the finish position, the kettlebell is directly above the shoulder, elbow straight. Both of these positions, start and finish, place the scapula in a stable position.

The movement pattern of the one-arm press is safe. Pressing from the rack to the finish position should be vertical. The elbow faces forward at the start, yet at the finish it faces to the side. This means the shoulder joint moves from a neutral position to a laterally rotated position, whilst the scapula moves into an even safer position of retraction and upward rotation, opening the space for the shoulder joint to spin and glide into a well-balanced position.

This coordination takes reflex-driven rotator cuff coordination and ideal scapula movement. During the pressing pattern, the scapula starts flush against the rib cage – not elevated, depressed, retracted, or protracted, but somewhere in the middle. At the start of the press, the spine of the scapula should incline approximately ten degrees. At the finish, it should incline approximately seventy degrees without tipping forward or losing its flush connection with the ribcage.

The position in the one-arm press means the neck doesn’t need to pigeon. Many shoulder strength exercises that require lifting a weight from below the neck lead to the athlete attempting to bring the neck to the weight. The resulting movement is akin to a pigeon poking its head and neck forward, hence the name pigeoning. Pigeoning leads to neck joint shearing and upper neck muscle recruitment, resulting in limited neck movement, pain, and headaches. If you think you don’t pigeon your neck, check yourself neck time you do upright rows or front raises. In the one-arm press, the kettlebell is pressed from the neck position to overhead, so pigeoning doesn’t happen.

The scapula tips further back during the pattern of pressing, clearing the space for the rotator cuff to operate and minimizing the risk of impingement. Not only does it tip further back, but it also rotates upwards, opening the space even more. It takes coordination of all of the back muscles to cause this rotation. The interesting thing is that the kettlebell can’t be pressed overhead when this scapula pattern doesn’t happen, so the drill is limited by scapular stability. This is contrary to upright rows and front raises, where the upper trapezius, pec minor, and deltoids can still lift a long-leveraged weight when the pattern coordination is poor.

This drill is great for development of “clean power.” Power is work done in a set period of time, so it requires strength, speed, and controlled movement. Controlled movement means the activity has appropriate timing, sequencing, and coordination.

Determining if a pattern of movement has appropriate timing, sequencing, and coordination is nearly impossible. However, if a pattern is shaky, jerky, or occurs in stages, we call it “dirty and difficult.” The opposite is a path of smooth movement, which we call “clean and easy.”

Another advantage of a vertical press is that it allows higher weight than a front or side raise because the lever is so short. The stimulus to the upper arm is higher, and the scapula remains stable. When the weight gets too heavy, the movement loses speed, and therefore power. It will become dirty and difficult. By that stage, more work has been done with a stable scapula and higher weight than the rival exercises of upright row, front raise, or side raise – all of which lose involve neck pigeoning and deviations of the scapula from appropriate alignment.

The last benefit of this great drill is that it reveals weak links that present injury risk.

The thoracic spine and rib cage, as well as all that attaches to them, are involved in a one-arm press just as in a two-arm press. The subtle joint movements require so much coordination between stabilisers and prime movers that we couldn’t dream of readily understanding everything. When someone’s rep count expires or the weight limit plateaus, we think strength has simply reached its limit. That’s not always the reason for failure.

When we switch to the one-arm version, if we see asymmetries in rep counts or weight lifted, we know that the possibility for the asymmetry is in the thoracic spine, rib cage, all of the associated muscles, the neck, and the shoulder girdle. The highlighting of side-to-side differences can direct us to improve function in these areas, releasing the handbrake on gains in pressing. When the weak link is highlighted by a dirty and difficult rep, we can modify the weight and set-up position for continued improvement.

When the weight gets too heavy for the normal pattern, there are some compensation movements that can occur. Most compensation occurs with the person leaning backwards to turn it more into an incline chest press. When this happens, the neck starts to pigeon, the lower back hinges, and the scapula gets away from its ideal position. The pigeoning neck is a dysfunctional compensation for poor trunk stability. This can lead to pain, limited movement, and altered motor control – three well-established risks for injury. 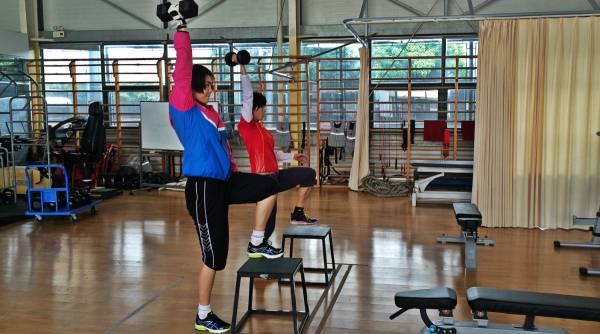 A Balanced Shoulder is a Strong One

It’s common for individuals to want bouldered shoulders, but nothing kills shoulder gains more than neck pain and shoulder impingement. The rounded shoulder appearance associated with front raise and upright rows should be nowhere near as attractive to an athlete as a well-balanced shoulder girdle.

If you favour the latter – and you should – switch to the one-arm press for your pressing work.

I’ve used this simple strategy to support high-volume shoulder use for many athletes for years. The combination of positions, patterns, and power adjustments has proved protective for athletes in pre-season training, and as a superset for other prime lifts. I’ve had a Chinese national handball superstar demonstrate clear gains in throwing capability using the one-arm press with a torn labrum and rotator cuff tendon. I’ve used it for my own development, and had no trouble surprising bigger lifters with starting weights greater than their front raise peaks.

Whilst the position and pattern is clearly challenging, none of my athletes who’ve pressed to failure have suffered injury or post-training soreness. Trust this drill. It works.