The Kettlebell Swing: Why It’s the Perfect Exercise

Thomas Edison once said, “The doctor of the future will give no medicine; instead he will interest his patients in the care of the human frame, nutrition and the cause and prevention of disease.”

Here are the reasons why it’s become the number one exercise most people should be doing:

Kettlebell Swings Reason #1 – It’s Better for Your Back

Firstly, and perhaps most significantly, Dr. Stuart McGill found kettlebell swings show a reversed polarity of posterior shear at L4 and L5 when compared to traditional posterior chain exercises.1 This is important because for those with lower back issues traditional posterior chain exercises such as deadlifts, good mornings, etc. may exacerbate the condition, while swings may not. For those looking to strengthen the lower back and unable to use these traditional exercises the swing may be just the thing they’re looking for.

Because of the dynamic nature of the swing the opportunity to overload or injure the body is quite low. A well-performed swing is ballistic in nature. A swing should be punched forward by the hips, not pushed slowly into place. For those wondering what I’m speaking about picture the difference between a bullet and a missile. In the RKC we speak of ballistics and grinds. A ballistic is a bullet – one moment of acceleration then it is coasting after being fired. A grind is like a missile – constantly being pushed along, no matter how fast or slow it moves.

The swing is as ballistic as a standing jump. And because of that, and the lower loads that are necessitated by it, the lower back simply can’t be overloaded the way it could be via deadlifts or power cleans.

Between lower loads and the reversal of negative forces on the spine, those two factors alone may be why many with problem lower backs credit the swing as the secret to rehabilitation of their injuries. In addition, the lower loads allow for many, may reps to be done in a workout. This results in a muscle flushing that McGill wrote about, quoting Jay’s 2010 research:

The rapid acceleration of the bell via the motion of the hips and knees is accompanied by substantial activation of muscles in both the posterior chain and the abdominals. The rapid contraction-relaxation cycles of some muscles occurring over half-second periods, specifically from inactive to 100% activation back to almost complete relaxation, have also been recognized by Jay et al. as a mechanism for flushing muscle of metabolites. Interestingly, Jay et al. also found pain reduction and incorporated kettlebell training 3 times per week over 8 weeks in a group of workers who performed demanding work. They proposed the muscle flushing mechanism as an explanation for the reports of lower pain.2

One of the least used tools for power generation or lifting safety is our breath. Try this simple experiment – put your hands over your stomach and exhale like a sigh. Now, sniff air into your belly through your nose and then exhale short and sharp like you’re trying to blow out a candle far away. 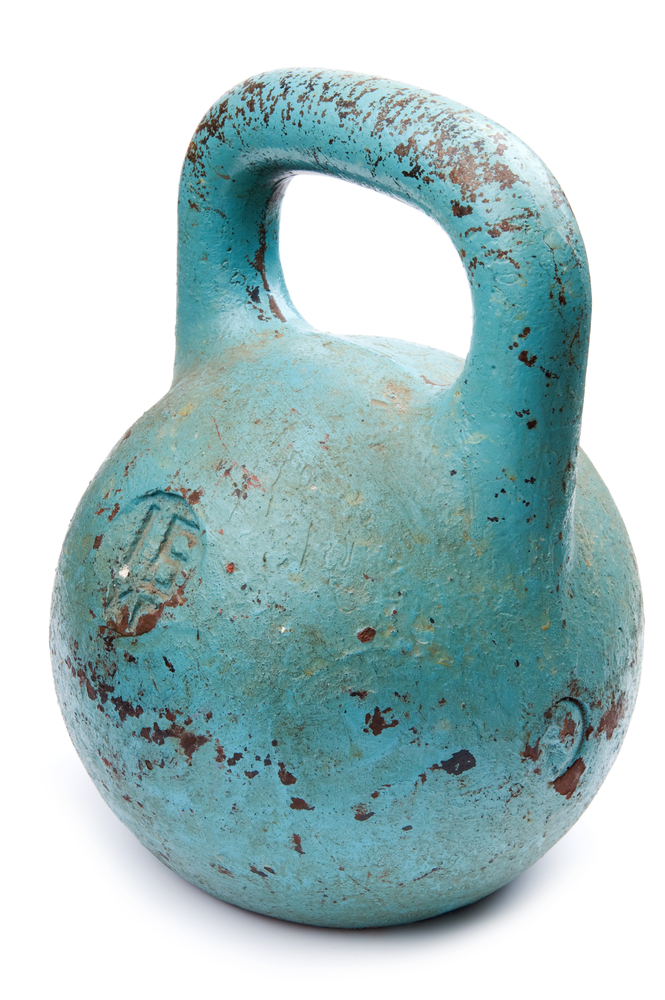 Notice the difference in how hard your stomach works? And do you know when your stomach is strong and switched on your spine is better protected?

Imagine your spine as a flagpole. On it’s own, with no bracing it just kind of flops around in the breeze. But when you use forceful exhalation, known in RKC circles as power breathing, you are essentially creating a stiff wall around that flagpole to keep it stiffer. When the brain registers the spine is stable it allows you to create more power. In essence, your abdomen is like the volume control for your strength. The more tension you create there, the stiffer the spine, the more force you can generate.

Using the Valsava maneuver creates a dynamic internal pressure that I believe supercharges the cerebral-spinal fluid flow. The interthecal pressure is greatly increased when you add movement to the Valsava maneuver. Cerebral-spinal fluid is pumped or controlled by respiration that causes movement in the sacrum and cranial bones. Now add to this the weight of a Kettlebell and you substantially amplify all these factors. I am not surprised people feel so great after a swing workout.3

Getting back to Edison, he adds:

Edison, being an expert on electricity knew that the body functions by electrical impulses and he must have further realized that the flow of electricity could be impeded by the spinal structure. I believe that the spinal curves must be correctly maintained or the flow of information in the nervous system is compromised. In Chiropractic we call that a Subluxation. In order to do the Kettlebell swing correctly I really had to work on my form and this had an incredible influence on establishing the proper lordotic and kyphotic curvatures of my spine.4

Getting Started with Kettlebell Swings

By this stage, you’re probably itching to get swinging, so here’s some tips from Master RKC Mark Reifkind5 who recommends starting to swing with a version called the Power Swing:

Each and every rep requires you to get back into the perfect starting position over and over. It’s the kettlebell equivalent to the barbell box squat, which also takes all the momentum out of the squat, forcing the trainee to generate all the power from their posterior chain. Just like the power swing.

The power swing emphasizes the key components of the perfect swing – sitting back and loading the hips, connecting with the kettlebell, and combining centers of gravity, as a strong hike pass and perfect control are essential after the initial swing.

The key principle of Hardstyle Kettlebell training is that, to quote Pavel, “We choose power over efficiency, choosing maximal acceleration in the quick lifts and maximum tension in the grinds.”

Why Do Kettlebell Swings Only Chest Height?

If we’re looking to the swing to be our one size fits all solution to back care then we must recognize that, for many, swinging the bell overhead is impossible without hyper extending the lower back or jamming the neck or shoulders due to limitations in their thoracic mobility.

The swing is an expression of forward force projection such as found in boxing or martial arts, like a straight punch. If you’re an athlete with a vertical component to your sport such as in Olympic weightlifting, Highland Games, or even swimming, then try the snatch.

Picking the right tool for the job will go a long way to ensuring your back stays healthy and strong for years to come!