The Most Misunderstood Training Tool: The Sandbag

To create a successful training system with the sandbag we first need to understand what makes it so unique. Instability, dimension, and placement all make the sandbag effective and special.

Ever want to hear an intense debate? Try sitting around a group of strength coaches arguing over the finer points and differences in Olympic lifting. Better yet, get a group of kettlebell enthusiasts together and try to discuss the nuances of kettlebell training. I could go on, but the point is that every fitness professional has specific views on implementation, progressions, programming, and technical components of each training tool. There does seem to be one exception, which is the sandbag.

I’m not going to bore you with the history of the sandbag, After all, just because something is old doesn’t automatically make it valuable. What intrigues me is the means in which the sandbag has been used in the more modern era. Some may argue that trying to systemize something like a sandbag seems too complex for what outwardly seems like a simple implement. Yet, how do we expect to achieve specific outcomes or see the value of this training method if we have no particular thought process behind the training?

What’s Unique About the Sandbag

I became a big believer in sandbag training because I felt the unique aspects of this style of training from the instant I tried to lift one. My interest drove me to learn everything I could about sandbag training, just as I had with many other forms of physical training. The more I searched, however, the more I found very little written on the topic. There was mention of sandbags in a host of books such as John Jesse’s Encyclopedia of Wrestling Conditioning, Brooks Kubik’s Dinosaur Training, or other books with bits and pieces, but nothing that really answered programming, implementation, or coaching/cueing questions.

As many strength coaches seem to do when they seek answers to their deepest questions, I began to use my training facility as a laboratory. Clients of varying abilities with different needs became my test subjects and would be the inspiration to answering these very questions I had about how to use the sandbag.

In order to understand the systemization of sandbag training, we first need to appreciate the unique attributes of sandbag training. As we begin to delve into sandbags, the differences to our more common training techniques become quickly evident. 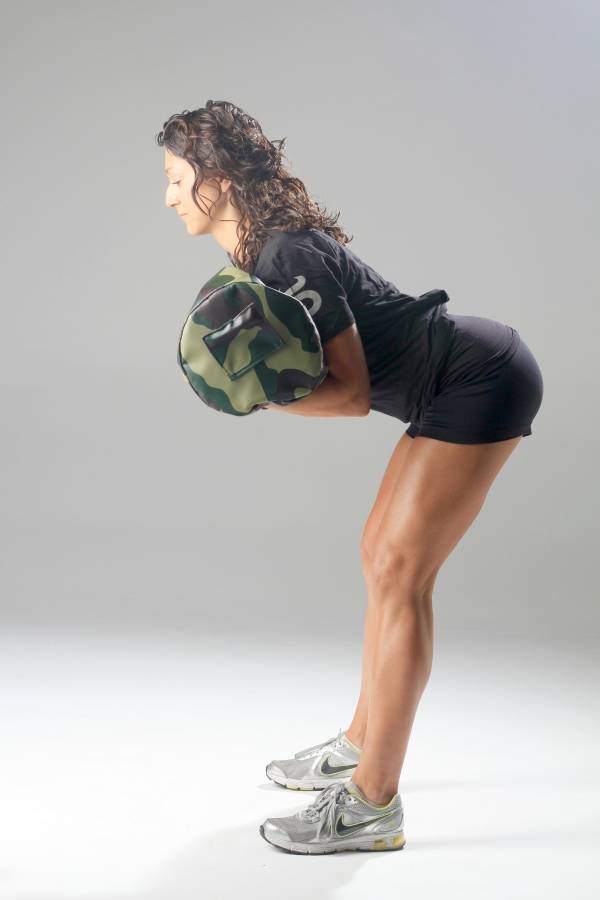 The unpredictability of sandbag training has been thought as a bridge from the weight room to actual sport. Sport itself is wildly unpredictable, especially those that deal with live opponents and aren’t able to predict where loads, forces, and positions are going to be coming from or set. I have used this concept as a means to make the Soviet notion of “imperfection training” more relevant for the modern athlete and coach. Old time strength athletes often said that sandbags “fill in the holes” of the more common forms of training, but can it be much more?

Great, they can be unstable, but how does that impact programming, exercise selection, and purpose? The instability of the sandbag itself is only one means of addressing the stability component. Understanding the relationship of the following other ideas will help us answer how we can actually benefit and program sandbag training.

One of the more unique aspects of sandbag training is the role dimension plays. Most iron sports go a long way to standardize the dimensional component of an implement. Barbells for powerlifting and Olympic lifting are carefully standardized and coaches will often pay a small fortune to get an approved barbell in order to perform these lifts. Kettlebell sport is adamant about having kettlebells of equal size so that dimension doesn’t alter the technique of lifting. Yet, in sandbag training, altering the dimension is of paramount importance in setting forth progression.

The dimensional changes are not just means to alter load. Changing the dimension of a sandbag allows one to manipulate instability. In other words, two sandbags can be the same weight, but depending upon the size of the sandbag, it may move a lot or very little. Having a more stable sandbag is appropriate when introducing more challenging movement patterns, holding positions, or planes of movement. More unstable sandbags are perfect when the body is in a more stable lifting posture and working in a more dominant plane such as the sagittal plane. Therefore making dimension a vital variable in the training system.

Sandbag Placement on the Body

How you hold a sandbag can completely change how you train. Rarely do coaches program the placement of the load. Most think in terms of exercises such as back squats, deadlifts, power cleans, and so on. The way these exercises are performed automatically dictates where the load is placed in relationship to the body. Sandbag training doesn’t adhere to one singular idea. Sandbag squats can be performed with the weight placed on the body many different ways, all with a specific purpose. 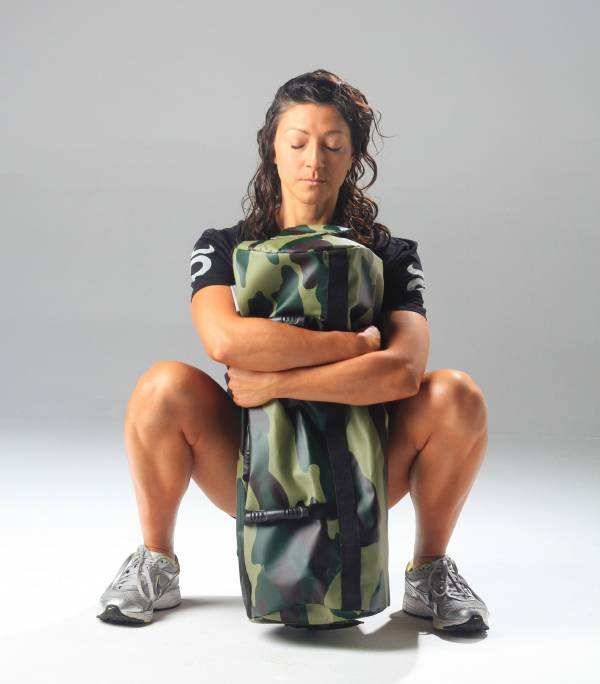 For example, the Bear Hug Squat places the weight in a position where we can handle the most amount of weight and actually can counterbalance our body. For this reason, the Bear Hug Squat can be used as a corrective drill, mobility exercise, posterior chain movement, and strength training all at once.

The Shoulder position is one that is most commonly thought of in sandbag training, but inappropriately applied. Sandbags are far from the only implement that can be used with an asymmetrical load, but sandbags are unique in the fact that the Shoulder position applies axial loading. This means that more than other asymmetrical loading positions, the sandbag really challenges the ability of the body to maintain its postural alignment during various exercises. As the Zercher position applies strong anti-flexion stresses upon the body, the Shoulder position provides strong lateral flexion stress. We can think of it as more frontal plane stress during some of our more common sagittal plane dominant movements. Unfortunately, most lifters simply throw a sandbag on their shoulder and pay very little attention to their posture or alignment.

Once we begin to appreciate and understand these foundational components we find ourselves with far more options in designing programs. These variables challenge us to become better coaches by becoming more thoughtful in how we apply stress to the body and ultimately how we can use sandbags not as a tool to be hardcore, but to be a problem solver.