Shaving reps and doing incomplete movements is common in CrossFit WODs. Cumulating evidence suggests that we have a “fudge factor” – the level where we feel comfortable in bending the rules. Let’s look at what type of situations influence our fudge factor, and what we can do to promote more honest behaviour.

Shaving reps and doing incomplete movements is common in CrossFit WODs. Cumulating evidence suggests that we have a “fudge factor” – the level where we feel comfortable in bending the rules. Let’s look at what type of situations influence our fudge factor, and what we can do to promote more honest behaviour.

The Psychology Behind Fudging

Dan Ariely, a behavioural economist, did extensive research on when and how people cheat. In one set of experiments, he gave students a sheet of paper with twenty simple maths problems. They would receive $1 for every correct problem. These maths problems were easy, but he only gave five minutes to solve them. On average, people had enough time to solve four questions.

“If you practice integrity in the gym it can be contagious to others. Don’t let someone with a bigger fudge factor determine your actions.”

It was not that a few people cheated a lot (saying they got twenty correct). Rather, almost everyone cheated a little bit. Ariely calls it our personal fudge factor. It can add up to more damage than that caused by more rotten apples:

“Across all of our experiments, we’ve tested maybe 30,000 people, and we had a dozen or so bad apples and they stole about $150 from us. And we had about 18,000 little rotten apples, each of them just stole a couple of , but together it was $36,000. And if you think about it, I think it’s actually a good reflection of what happens in society.”

Which of the above experiments sound like the way that your CrossFit gym keeps score? Gyms do not have referees counting reps for each individual. A CrossFitter reports his or her score and that score is taken at face value. It seems likely that athletes use their personal fudge factor in counting reps and in doing complete movements.

The level of cheating or fudge factor did not increase or decrease by much, even if experimental conditions changed. Having participants shred the test and then grab the money from outside the room did not lead to much change in behaviour. It would seem that when it is easier to cheat, more people would cheat. That is not the case. Even with little risk of getting caught, participants only cheated a little bit.

One reason people cheat a little bit is that we want to feel good about ourselves. We don’t think of ourselves as cheaters. We can cheat a little and still feel like a good person. Another mechanism is rationalisation. We can rationalise a little cheating. “If I hadn’t screwed up that one double under, I would have been twenty seconds faster.”

“One reason people cheat a little bit is that we want to feel good about ourselves. We don’t think of ourselves as cheaters. We can cheat a little and still feel like a good person.”

We see this fudge factor in WODs rather than true cheating. We don’t see the average CrossFit athlete put a three minute Fran time on the board. Rather, the score changes by only a little bit. “Wow, you were quick onto that second exercise. I was only at ten reps and you had finished all fifteen.”

In a further experiment, Ariely had a bogus participant get up right after starting the test to say he had finished all twenty problems. The researcher paid him. After seeing the person get away with dishonest behaviour, the remaining participants tended to be more dishonest.

I have observed a similar phenomenon as I visit CrossFit gyms. One person getting away with partial reps can be contagious. Conversely, if a coach yells to one person to complete the full reps, then others in the gym perform better reps.

#2 It’s All About Perception

The t-shirt the cheater was wearing also mattered. If he or she wore a shirt from the same university, the participants cheated more. If the cheater wore a competitor’s t-shirt, then cheating went down. We can rationalize someone from the competition being a cheater. “We do not do those things, only people from X gym do that.” 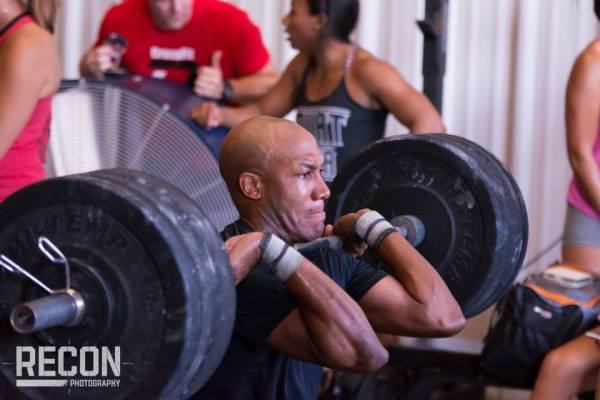 #3 A Reminder of Integrity

“Integrity is doing the right thing, even when no one is watching.” – C.S. Lewis

In another twist on the maths problem test, students were asked to agree to the “MIT honour code”. Even though no honour code exists, these students showed less tendency to cheat. Having people read the Ten Commandments or the above C.S. Lewis quote had the same effect.

Using a Pledge in the Gym

A quick Google search showed me many integrity pledges from CrossFit gyms. Here is CrossFit Harrisonburg’s:

“I am a CrossFit Harrisonburg Athlete. I pledge to perform at the best of my ability daily. I pledge to keep myself and others accountable to the integrity of the Workout of the Day, Every day. I pledge to listen to my trainers, even when I am tired, hurting and frustrated. I pledge to perform all movement at the range of motion appropriate for me, and always strive to be better. I pledge to embrace and be proud of where I started, where I am and where I will be going. I pledge to be a contributing part of this community, and support all athletes around me in the highest sportsmanship matter.”

Dan Ariely describes how most of us are capable of cheating to some extent, but very few people will cheat a lot. “It’s what we call the fudge factor – you’ll add two extra receipts to your tax return [for deductions], but you can’t do twenty. There’s a point at which it feels wrong.”

This fudge factor is common in CrossFit as many of the same conditions exist. We can reduce the fudge factor with a few simple changes:

1. Ariely, Dan. 2013. The Honest Truth About Dishonesty: How We Lie to Everyone–Especially Ourselves. Reprint edition. New York: Harper Perennial.