It is often the case that coaches introduce an unorthodox coaching solution just to distinguish themselves from their peers. It makes them appear unique, but does it really benefit the athlete?

The Benefits of the Split Lifts

In 1992, I started coaching the split lifts with my strength and conditioning athletes. I did so, not because the movements were novel, or out of nostalgia for a technique that was long forgotten, but rather because they provided some benefits that could otherwise not have been realized.

The correlation between successful split lifting and foot speed is undeniable. The regular practice of the split snatch and split clean places an emphasis on foot speed, and for this reason it encourages the development of fast foot movement. When the feet are alternated while employing the same weight, equal left and right development of food speed is further encouraged.

For athletes whose sport demands fast feet, the regular practice of the split lifts provides an effective training effect.

As addictive as the snatch and clean may be, even the most committed athletes will thrive with some variation in their program. Different lifts that emphasize the same athletic activities offer new opportunities to succeed and develop proficiency. While emphasizing the same explosive qualities as do power snatches and power cleans, split lifts offer a significant variation for utilizing and developing athleticism.

Split lifts offer the athlete another manner in which to brake under load, a significant factor in preventing knee injuries. While employing heavier and heavier weights, the athlete becomes more and more proficient at cushioning the impact of landing.

If you want to achieve a certain position, you have to learn what it feels like. This is the reason for employing the following exercises. If an athlete becomes familiar with the bottom of the split position, then descending into that position is facilitated.

The first thing to do is to determine the foot placement or stance for the split. I’ve found that the best method to do this is to kneel on one leg and then place the feet so that there is a 90° angle formed by the front and back knees. By pushing up from this position, the optimal foot stance can be determined. 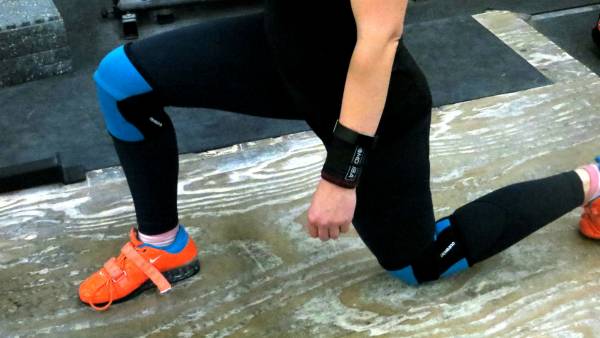 The feet will find their optimal split position by a simple 90° kneel.

This is an important exercise to learn the feeling of the bottom position for the split snatch. When training athletes who are not planning on being weightlifters, I have them practice with alternating feet. The athlete starts with both feet on a line and the weight held overhead with a snatch width grip. The athlete then steps forward into a lunge stance with either leg, descends until the knee is fully flexed, and then recovers by stepping all the way back to the original position. The athlete then repeats with the opposite leg.

This is to assist in learning the position for the split clean. The bar is held on the shoulders as for a front squat. The feet are in line. As in the overhead lunge, the athlete steps forward with either foot, and descends until the front leg is fully flexed at the knee. The athlete then recovers to the starting position and repeats with the opposite leg. 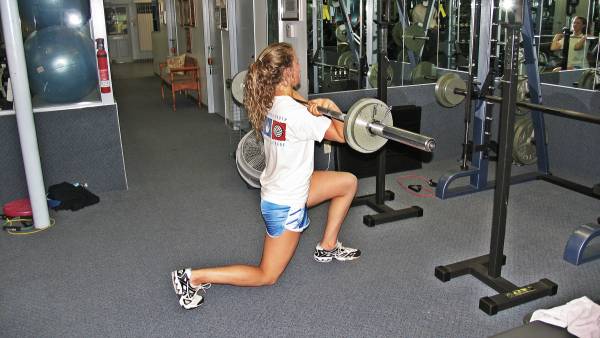 The front rack lunge will help reinforce the position required to catch a split clean.

I usually use blocks during the early phases of training since it removes the variable of pulling from the floor. Pulling from a mid-thigh height develops explosiveness in the proper range for volleyball running and jumping.

Split snatches and split cleans are performed from blocks with legs alternating so that the development will be bilaterally balanced.

Strength and conditioning sessions are conducted three times per week. Snatches, cleans, jerks, and squats or their variants are performed at each session. The split lifts are employed in one of the three sessions. The reps are kept in the 2-4 range, and the number of sets at 4-5. The weight is not as critical as the speed of the bar in the snatch, clean, and jerk. While increasing the weight is encouraged, it has to be within the range where optimal speed is employed.

Not everyone who touches a barbell must be a weightlifter: