Have you ever watched The Three Stooges? Why did Goldilocks have to deal with three bears? Something about the number three resonates deeply with our species. Your training is no different.

Have you ever watched The Three Stooges? Ever heard a joke like, “A priest, a doctor, and a lawyer walk into a bar …”? Why did Goldilocks have to deal with three bears?

Something about the number three resonates deeply with our species. Whether it’s in stories like The Three Musketeers, religion like the Christian Holy Trinity, or in speeches like Martin Luther King’s line, “Justice, goodwill and brotherhood”; we are more likely to remember, internalize, and utilize information if it is presented in three chunks.

Your body is not all that different from your mind. Getting stronger isn’t just about putting in hard work, or even putting in the RIGHT work, but in doing so in the right WAY.

So, if the rule of three works so well for your brain why not apply it to your body?

In our gym, my lifters rarely do more than three exercises per workout. They might do more, but the other exercises are just add-ons that could be dropped off without any serious loss. I don’t like routines where you throw in everything and the kitchen sink in an effort to “cover all your bases”. As a rule, that leads to floundering.

Instead, you want a laser-like focus in your workout routines. Hone in on the key things you want to get good at … and practice them! It really isn’t as complicated as people make it out to be.

“Omne Trium Perfectum” – Latin for, “All Things that Come in Threes are Perfect.”

The Rule of Three Workout Routine is pretty straight forward. It has you doing three exercise per workout, three workouts per week, for three weeks. You then take a light week and repeat.

How simple is that?

The first day of the program is focused on your lower body. Don’t worry, we’ll get to work your awesome arms on Day 2.

The Hip Thrust isn’t the most well-known exercise, if you haven’t used it before check out my Hip Thrust video tutorial. Like the squat and the deadlift, the hip thrust is a lower body exercise that is not only a “compound” lift (it works multiple muscle groups at the same time), but it allows you to add a ton of weight. 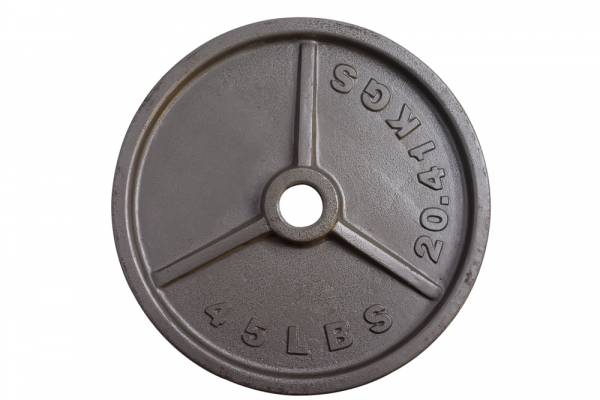 It is a common problem with beginners that they don’t take the fundamental idea of “progressive overload” seriously. This may seem obvious, but if you don’t continually add weight to the bar you will not get stronger. Period.

Kettlebell work is great for conditioning, speed training, and initial strength training – it also works the hips in a very similar way that the hip thrust does – but you can’t do a 400 pound kettlebell swing! You CAN do a 400 pound hip thrust.

I’m not going to get too into “how to” hang clean because I’ve already written up a (three-step!) tutorial on that. But, the reason you will include the Hang Clean is because it is a fairly easy exercise to learn that allows you to do explosive work. And, just like the hip thrust, it is loadable. You can start very light and work up to some majorly heavy weights.

The front squat is my all time favorite exercise. It gives you most of the benefits of the back squat but with very little of the downsides. You just can’t cheat a front squat the way that you can a back squat. If you start to lean too far forward with your hips too high then you will simply dump the bar.

Sets x Reps
This is the easy part. All you are going to do is work up to a heavy set of 3. On a day you feel strong, you might try and “max” out by continuing to add weight until you miss the 3rd rep.

By the way, you know the Hip Thrust has gotten too heavy when you can no longer extend your hips above parallel anymore.

I can hear you screaming, “I need to work my guns, dude!” Don’t worry, we’re gonna do some of that today. But first we gotta work your hammies.

I like the Romanian Deadlift, in part, because you are forced not to go as heavy as a conventional deadlift.

“But, Nick, you keep telling me to add weight to the bar … What about progressive resistance?”

I know. But, here’s the thing. People hurt themselves all the time doing deadlifts because the exercise tempts you like a siren to go too heavy too fast. With the Romanian Deadlift you just can’t. It’s a “for reps” exercise not a 1 rep max exercise. 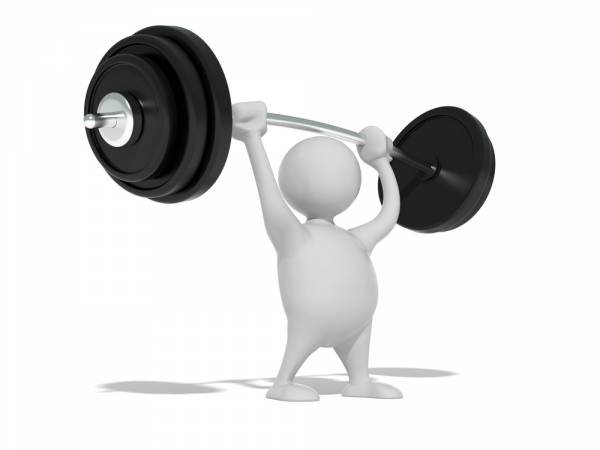 OK, now we’re gonna work your pythons! Well … your whole upper body, core, and even your legs to some degree.

The Push Press is like the squat of the upper body. It’s similar to a bench press in that you can load it up with a crazy amount of weight. But, like the squat it forces you to learn to stabilize your core and torso with heavy weights while on your feet.

You are going to do chin ups in a manor totally unlike you would in a CrossFit club. No kipping, no high reps. Just like for all the exercises in this routine, the point is to get stronger. That means low reps with an eye toward progressive resistance.

Again, you’re going to work up to just one heavy set of three reps. On a day you are really gung ho (energy wise) try to keep adding weight until you can’t make the last rep.

WARNING: Only do this for the upper body exercises on Day 2. The Romanian Deadlift should NEVER be taken to failure.

Day 3 is EXACTLY the same as Day 1! And Day 4 will be exactly like Day 2, etc. You rotate through the two workout days over three days per week. So over a three week period you will have done each day four or five times each.

Every 4th week should be lighter. By that I mean that you should do the same exercises, but don’t work up as heavy. Just go through the motions. I’m giving you permission to be lazy, here … take it!

Life doesn’t have to be complicated and neither does your workout routine. In a previous article of mine here at Breaking Muscle about the Status Quo Bias I encouraged you to try out a new workout program and give it the old college try.

Try the Rule of Three Workout for the full three weeks, take the light week, and then reassess. Often, all it takes to make fast progress is to …