The Truth About Hypoxic Training and Oxygen Reducing Masks

Let’s talk about why masks have been around since 2009 and most people are only hearing about it now, in 2014.

Hypoxic training, or the practice of limiting oxygen availability while training, has been used for decades to improve performance. The United States Olympic Training Center is located just south of Denver, Colorado, because it is the highest city in the United States, where the air is thinnest. Training in this environment will boost the production of red blood cells and aid stamina.

Over the past few decades, various methods of replicating the benefits of living a mile above sea level have been attempted, ranging from hyperbaric sleeping chambers, to low-oxygen tents, to portable hypoxic machines. If you’re not a professional athlete, most of these methods will be fairly inaccessible to you. But a hypoxic mask might be within your budget (they retail for under $100). But before we get too far into the mask idea, let’s talk about why masks have been around since 2009 and most people are only hearing about it now, in 2014.

Victor Conte and Your Training Mask

The idea of wearing a hypoxic mask got off to a rocky start when the first widely available version was introduced by Victor Conte, of BALCO fame. It looked similar to a dirty bar rag with face straps (while Conte’s reputation in the athletic world is also similar to a dirty bar rag, face straps optional). Conte was notorious for introducing products with supposed science behind them that were later proven to do nothing, or at least very little.

When he first introduced ZMA (zinc magnesium aspartate) to the sporting world, it was done by claiming that it was the secret to his athletes’ success, which we later found out was actually steroids. He even showed us a study that proved its efficacy, which he co-authored, and which was published in a reputable medical journal. Of course, we later found out it was a highly dubious online pay-to-publish journal.1

Subsequent independent studies showed ZMA supplements to provide little-to-no performance effect in athletes.2,3 So strikes one and two against this product, at least in terms of reaching mainstream commercial viability, were the fact that it looked absurd and was introduced by a snake-oil salesman.

The BS About Breathe Right

So, what about athlete testimonials regarding hypoxic masks and the people who swear that Conte’s mask has helped them? Glad I asked.

Remember Breathe Right strips? They looked like little pieces of tape that went over the bridge of the nose and were supposed to increase airflow and therefore oxygen uptake. Everyone in the NFL, NHL, and half the other major sports leagues wore them for a season and swore the strips helped them perform better. But they didn’t actually perform better. Nobody recorded significant improvements in any statistic their leagues track that could be attributed to the strips.

Moreover, studies not funded and/or performed by the Breathe Right company failed to show any benefit to the strips whatsoever:

Right. So that’s why we only saw athletes wearing them for a season. Plus, they looked stupid. The original hypoxic masks also looked stupid. The new ones make you look like Bane, sans Sean Connery voice. We’ve seen numerous athletes training in them already, but are they a fad like the nose tape? And what does the research say? 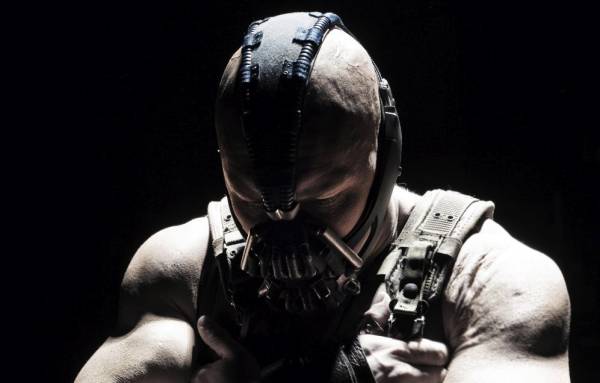 The Problems With Most of the Research

It’s important to note that there isn’t a tremendous body of literature on hypoxic training. In addition, the vast majority of existing research was done by having subjects exercise in a room that simulated atmospheric hypoxia (translation: the air didn’t have as much oxygen).

Other tests had subjects strap a mask to their faces with a huge oxygen regulator attached by a tube to the other end (so they couldn’t do much moving around). Those tests were typically limited to treadmill running or stationary cycling. The masks that we see being sold, well, if they work like training at altitude or in one of these special hypoxic rooms, then we can expect them to have the same effects.

Looking over the available research, here are some of the more relevant studies I found:

Obviously, the results of acute hypoxic exercise are vastly different than what we see with long-term hypoxic living conditions, as we’d have with the United States Olympic teams, and even those studies have been all over the map with results. Still, with studies, the modality isn’t the sole determinant of success (and I feel that most of the training protocols in these studies were awful). We also need to examine the parameters being used to measure results.

Put another way, the Westside Conjugate Method is great for increasing leg strength, but if we measured leg strength by having Westsiders run marathons…well, you get the idea. The metrics are just as important as rest of the protocol. And I believe both the training protocols and performance metrics have thus far been inadequate to accurately describe the adaptations possible with acute hypoxic training.

An Interesting Study on Hypoxic Training

Let’s look at a study that showed some reasonable improvements. The study that meets most of my criteria was performed at the Japan Institute of Sports Sciences.14 This study used a hypoxic room versus a normoxic room, and had subjects perform eight weeks of resistance training on nonconsecutive days for sixteen sessions in total. 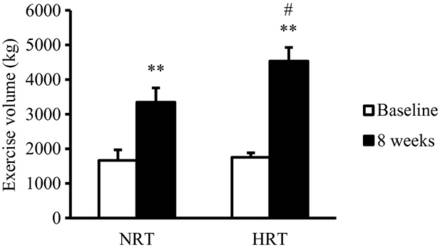 The hypoxic group was exposed to hypoxic conditions from ten minutes before and thirty minutes after the exercise session (vastly different than other protocols). (To the d-bags who wear hypoxic masks to the gym and take them off between sets to talk: you’re doing it wrong.) To investigate acute responses, the subjects were exposed to these conditions from thirty minutes prior to sixty minutes after, on the first and last days. 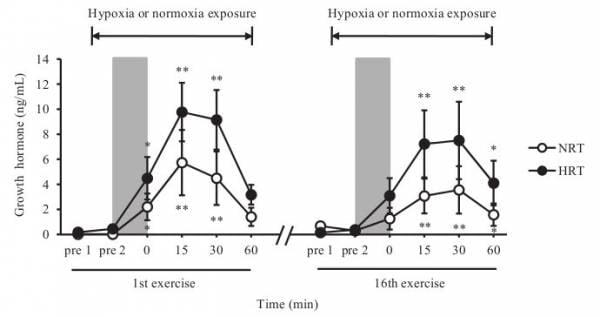 The resistance exercises consisted of two consecutive exercises (free?weight bench?press and bilateral leg?press using weight?stack machine), each with ten repetitions for five sets at 70% of the subjects’ one?repetition maximum (1RM) with a ninety second rest. 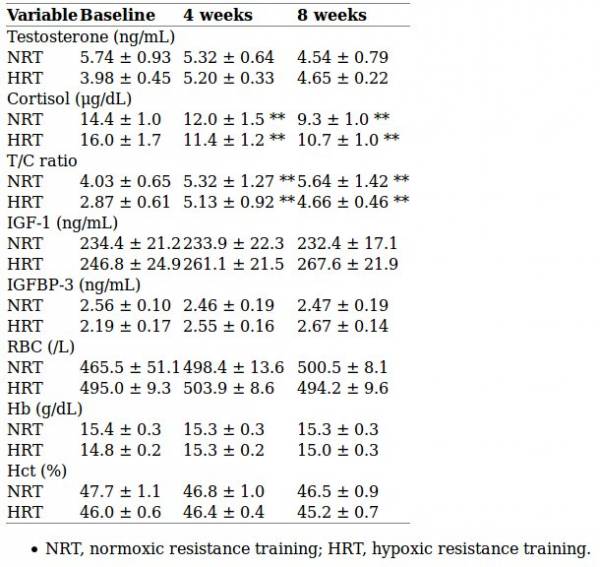 Strength and size gains were equal for both groups. During the training, levels of plasma oxygen were lower in the hypoxic group (obviously, as they were breathing less oxygen when the tests were taken) but growth hormone levels were significantly higher. The capillary-to-fiber ratio increased more in the oxygen-deprived lifters and vascular endothelial growth factor (VEGF) levels were also higher. Meaning, the hypoxic group was producing more blood cells and better able to restore oxygen supply to tissues when blood circulation wasn’t high enough for the body’s demand. 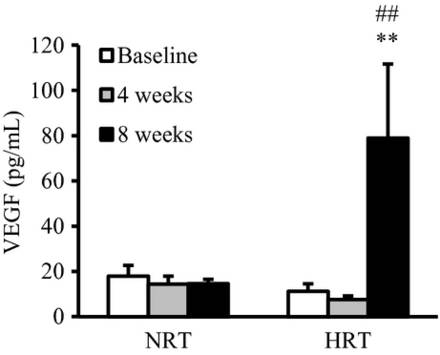 Therefore, it’s not surprising that local muscular endurance was increased more in the hypoxic group as compared to the normoxic one. It also provides insight into another study that suggested a health benefit from regular short-term hypoxic training, namely the reduction of arterial stiffness and prevention of arteriosclerosis compared to training performed at a similar exercise intensity (under regular, non-hypoxic, conditions).15

My Conclusion on Training Masks

Which brings us back to hypoxic masks and how to use them. Recent meta-analysis indicates that high-intensity, short-term, and intermittent training is likely the most beneficial way to benefit from hypoxic training.16 If the masks being sold today can simulate the conditions seen in the study above, then there’s a good chance we’ll see someone figure out how to best use them (obviously the “just wear them when you train” protocol is going to be hit and miss at best).

Some form of brief HIIT seems to work best. I’d add that based on the Japanese study, wearing the mask before and after training is going to be essential for maximal results (and for an awesome ride to and from the gym!). 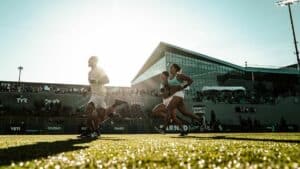 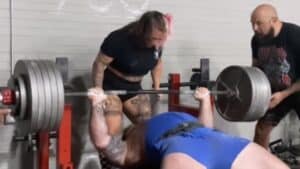 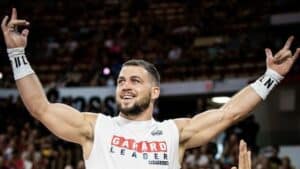