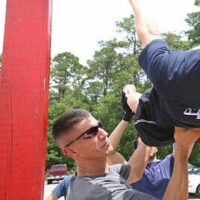 Anthony Roberts holds a BA in both English and philosophy, with a minor in women's studies. He is the author of three books on the subject of performance enhancing drugs, is a staff writer for Muscle Evolution magazine, and a member in good standing of the Society for Professional Journalists.

Anthony is also a certified trainer and coach, and a professional member of the National Strength and Conditioning Association. At age seventeen he won a silver medal in martial arts at the Garden State Games, black belt division, then began playing rugby at age eighteen. After four years of captaining Seton Hall's team, and two appearances in the Collegiate National All Star Game, Anthony moved to New Zealand to play for a club in the first division. Upon his return he continued playing for a first division men's club, while spending a season as an assistant coach at a federal military college, followed by three seasons as head coach, leading to a national ranking of thirteen and two first division championships.

Anthony has worked in the dietary supplement world for the past decade, where he has introduced new ingredients to the market, formulated numerous products, sourced and sold raw materials, and provided consulting services to companies that range in size from small start-ups to some of the largest in the industry.