I get accused of being a Sadist on a fairly regular basis. I take that as a compliment. Every coach must be just a little bit sadistic (someone who enjoys seeing others in pain) or else they’ll never be good at their job.

I don’t want to give the impression coaches are psychos (though, some of us clearly are). But, let’s face it, working out hurts, we want you to do more of what hurts, and most of us secretly (or not so secretly) enjoy watching you squirm around.

If we get our way, your muscles are going to ache, you’re going to go through some rather heady psychological struggles, and sometimes, every once in a while…we’re going bruise you up good! (For your own good, of course.)

During the early stages of learning the snatch, there comes a point where you are going to smack your hip so hard it will cause a bruise. You’ll come up to me and say, “Nick, what did I do wrong? I hit myself really hard on the hips yesterday and it left a bruise. How do I fix that?”

I’ll reply, “That’s awesome!” And then I’ll laugh in my usual loud manner and say, “You’re finally starting to get it.”

Two Ways to Do the Same Thing

There are always arguments about whether or not weightlifters should BANG the hips with the bar or if they should only BRUSH the hips with the bar. The Bang crowd will pull the bar in so violently it will literally smack the hips and rebound off of them. The Brush crowd doesn’t do this; they simply drag the bar up the hip. 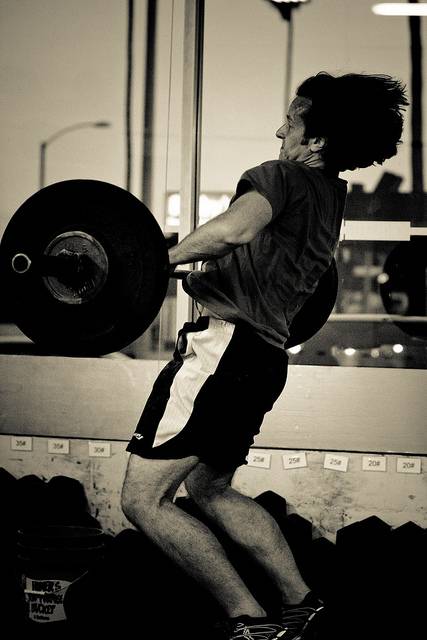 What they both share is that the bar gets into the hip. (Please read that again, because you need to do this!)

Theories abound on either side about why the other way is going to screw you up. For most of us, it doesn’t really matter. You’ll likely just settle on the way that seems most natural for you.

As an example of the pros and cons, take two of my own lifters: Arron and Brandon. Many of their exploits are up at our Youtube Page where you can watch a ton of videos of them Banging and Brushing their hips.

Arron is a bona fide Banger. On every lift, from the empty bar on up to the biggest snatch, he bangs the bar off his hips. Brandon is a Brusher. The bar seems to delicately slide up the hip on its way over his head.

The upside for Arron is the explosion off his hip is ridiculous. There is so much force you can literally HEAR the smack. That bar moves fast! So, at heavy weights, the extra speed makes getting it over his head that much easier.

The downside for Arron is when he isn’t lifting at his best, the bar can get rather swingy. He’ll bang the bar with a little too much aggression and it will end up flying forward and swinging around his body in an arching motion he then has to try and stop over his head while in a full overhead squat. Try that for “core” work!

Brandon, on the other hand, swings the bar far less, and tends to be more stable in the catch because of it. But, he doesn’t get the benefit of the extra force of the rebound off the hip. So, he has to make up for that by being that much more explosive with his body.

Life is all about double-edged swords. You take the good with the bad. In this case, both swords – the Bang Sword and the Brush Sword – are equally good. And, I think you’ll likely settle on the style that feels right for you.

(By the way, I’m a Banger…and I also suffer from being too swingy!)

Be Smarter Than the Bar

While it might seem as though Banging the bar on the hips would result in some serious bruising (metal is harder than bone, right?), if you do it right, it doesn’t at all.

However, if you do it wrong, it will bruise you something fierce!

Nine times out of ten, when a lifter bruises their hips during the smack on the hip it is because the angle of entry for the bar was too horizontal. At the Knee Position (the bar literally touching your knee-caps) your hips were too low and your knees were likely not back enough. Your shins were not perpendicular with the ground. The angle from the knee to the hip was too shallow.

As you pulled the bar into your body the bar came in horizontally toward the hip and a huge amount of the kinetic energy got released on the bang itself right into the hipbone. Ouch!

The bar is now going to rebound forward rather than upward. It’s like throwing a tennis ball straight at a wall – it’s going to come right back at you. 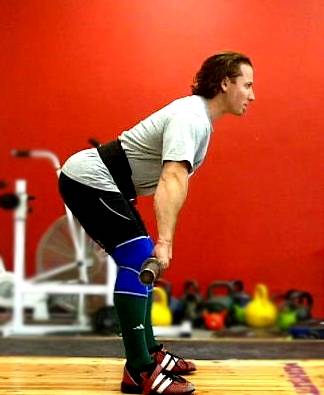 The RIGHT way to do it is to make sure that at the Knee Position your shins are way up vertical – perpendicular to the platform – and your hips are higher. I like lifters to really over-exaggerate how high their hips get during this part of the lift. It helps the learning process (not just of the snatch/clean, but anything) to exaggerate the movements in the beginning.

With the hips higher, the angle from the knee to the hip is steeper. This angle makes the path of the bar more vertical, and therefore, the force at the contact point between the bar and hip is far less severe. That energy is instead used to get the bar up.

This time it was as if you threw the tennis ball up at the second story window and it glanced off it. Yes, it still bounced, but the force against the surface of the window wasn’t so bad.

You Are in Control…I Swear!

Bringing the hips to the bar is better than the two never meeting. But, it is still wrong. You need to be bringing that bar to YOU, not the other way around. You are in control. Going to the bar will most often result in your coming off your heels too soon and you driving the bar forward too much or swinging the bar all over the place. Either way, you’ll probably miss it.

If you bring the bar to you, then the bar stays over your (combined) center of balance far better. You are in control. You, not the bar. 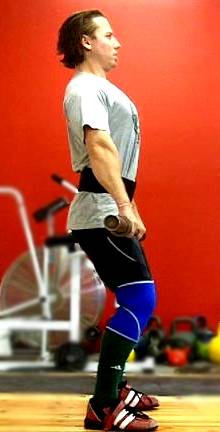 Do This at Your Next Snatch Workout

I’m going to contradict myself for a second and suggest for certain people – most people – trying to be a Banger is better. If you struggle to get the bar to touch your hip at all, if during the pull the bar strays far out from your body, if you can’t keep it CLOSE, then attempting to bang the crap out of yourself will do wonders to fix that.

I want you to hurt yourself…I’m serious! If you’ve been struggling to get the bar in close to your body on your snatches and cleans, then you need to err on the side of banging the bar HARD on your hips.

Sure, if you bruise yourself you are technically doing it wrong, but at least you got the bar into the hip – maybe for the first time EVER!

Brush it, Bang it, it’s up to you in the end. But whatever you do, get that bar into the hip. Until you can do that, I want to see you suffer.