CrossFitters, put yourself exhaustedly into the last round of Fran. We’ve all been there. Your lips are white, your hands are numb, you can’t breathe, and you feel like there’s an evacuation surely about to happen – either upstairs, downstairs, or both – truly, no bueno.

Now imagine reaching down to grab the bar for your very last thruster and without warning the bar jumps eight inches from your hand. Not only does it move, but it also tells you to, “Go [email protected]&k yourself.” To add insult to injury, it goes on to tell you if you don’t get a hold of it and perform a legit rep, it’s going to kill you, after it slowly has its way with you for a few hours, and then again twice more once you’re dead.

That is how world-renowned, self-defense expert and CrossFitter himself Tony Blauer wants you to think about your workouts. Tony is the founder of Blauer Tactical Systems and has been studying and teaching self-defense to law enforcement, the military, and civilians for the last thirty-six years.

In the last year, Tony has developed an incredible, full-day course specifically designed for and attended by thousands of CrossFitters. The course, aptly called Be Your Own Bodyguard, has seen athletes the likes of Mikko and Kinnick, Khalipa and Starrett. The material has application for both the elite and hobbiest CrossFitter – scalability – as Blauer’s SPEAR System is functional movement applied to self-defense.

To Tony, CrossFit is a great preparedness tool for just about anyone. CrossFitters are stronger than the average bear, have spent some recent time outside of their comfort zones, have conscious contact with their physicality, and deal with some level of fear (or at least fear of their workouts) on a daily basis. But beyond the physical state of being ready for anything is a mental state of strength and readiness. That’s where Tony comes in. Tony specializes in not only the physical contact aspects of violent encounters, but even more on the psychological, emotional, reactionary aspects. The world’s greatest defensive device or choke escape left unused due to its practitioner being frozen by fear is utterly useless.

CrossFitters may have a leg up on the competition, but there are still two places Tony sees holes in their self-defense game:

Tony’s real goal is to teach you how to recognize the crucial moments before a violent situation takes place so you can be present, be conscious, and be ready to use your hard-earned physical traits. 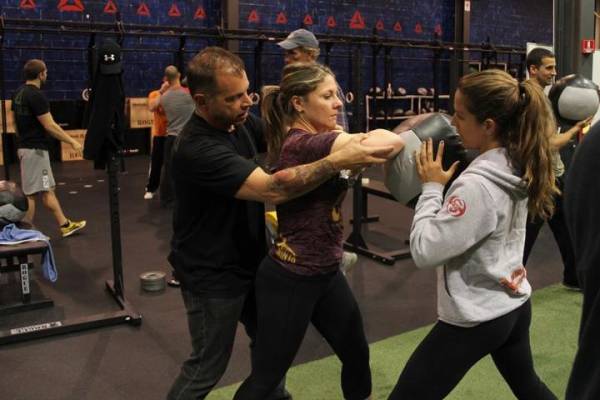 By teaching CrossFitters what to recognize in his courses, he’s allowing us them to avoid situations far more often and with far more certainty than before. (After all, none of us have ever come home to find a kettlebell blocking our front door demanding 10 perfect, unbroken swings, with potentially fatal consequences assigned as the result of any mistake.)

When a fireman sees a clean and jerk as a training method for taking a lifeless body from the ground into the hands of help above, the bridge between training and function has been achieved. Most CrossFitters can make this mental leap and often find that after a year of training they see movements replicated from the gym into real life.

Mr. Blauer wants you to take that leap one step further and view your thruster as an upward palm strike to an attacker’s nose, your slam ball as driving an attackers face into your knee, and reaching over your shoulder to grab your seatbelt as an identical pattern to ripping your elbow across someone’s brow.

Malcolm Gladwell says you must have 10,000 hours under your belt before claiming an expertise in any area. Tony doesn’t want us all to spend an additional 9,992 hours practicing after his course – that wouldn’t have you been the safest you can be, as soon as you can be – so he picks movements that people of all shapes and sizes have done countless times before and merely shows the transition in thinking – from seatbelt to elbow, thruster to palm strike.

As a fan of Tony’s work long before the CrossFit community found his expertise, I believe the two go naturally hand-in-hand. Tony’s Be Your Own Bodyguard course is a must for all CrossFitters. If you are a CrossFitter, read that again.

If you still have a shadow of a doubt about the course and why you need it, do this – load up a bar with two hundred pounds, lie on your back, and rest the bar so that half of the weight is between your legs and the other half sitting on your chest. Now start mentally listing your escape options. Now do it again blindfolded with a bloody nose. Now call Tony.

Tony Blauer is a man you want to meet before you need to or wish you had. Fortunately, Blauer Tactical Systems will have a booth this weekend at the 2012 CrossFit Games. Stop by, introduce yourself, and thank Tony teaching so many of us how to stay alive.