Train Like the Pros: Get More Air on Your Jumps

These tips help NFL Combine hopefuls (and you) take flight on the vertical and broad jump.

‘Tis the Combine season, and at Cal Poly we are hot and heavy into Pro Day prep. The college football season wrapped up a few months ago, and the seniors (along with a a few juniors) all over the country are getting themselves physically peaked to be put on display for the NFL scouts. Coaches like myself are trying to squeeze out a little more magic to get our guys noticed. It’s one of those wonderful times when dreams are fulfilled and sometimes dashed.

Do you have what it takes to run with the pros?

Athletes Are Built, Not Bred

This is also one of those times when a more unknown player can make a name for himself. You hear it year after year. So-and-so from South Eastern Western Tech is suddenly on every team’s radar because of a blazing fast 40 time or some crazy jump. Last year, the University of Connecticut’s Byron Jones, a corner, shattered a Combine broad jump record by 8 inches, marking a staggering 12’ 3” jump. He then followed it with a 44 1/2” vertical leap to make him the most impressive leaper the Combine has ever seen. He was promptly scooped up by the Dallas Cowboys in the first round of the 2015 NFL Draft as the 27th player selected overall.

Byron’s performance was a one-of-a-kind showing that we likely will never see again. The vertical jump and the standing broad jump are the two big leaping drills for the NFL scouts. Both are decent indicators on explosiveness. Training for the jumps can take on a variety different looks. Some coaches live and die by plyometric training, whereas others like myself will take a bit of an unconventional route. Either way, many coaches believe that there’s not much you can do to dramatically increase these numbers. They believe these athletes are bred, not built.

I could tell you stories of dramatic increases we’ve been able to produce with what most would consider to be mediocre athletes at best. But I’d rather show you how we did it. If you’re preparing for your Pro Day, you’ll learn how to make the most of your jumping abilities. Hell, if your sport involves jumping of any kind (Olympic lifting, anyone?), these tips will fire you up (or forward). This is how we build strong, explosive, open hips in our players at Cal Poly. 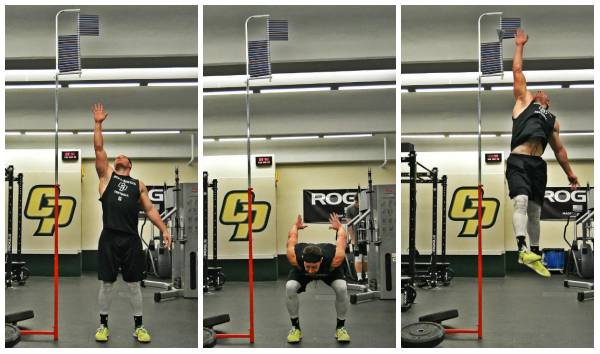 Nearly all athletic movements start at the hip. My athletes preparing for the Combine or Pro Day squat and pull their hips into shape. It is my firm belief that the qualities we consider to be “athletic,” like speed, power, and even flexibility, are built from a foundation of strength. Without strength, the other qualities have little chance to flourish.

Squatting, particularly front squatting, is a mainstay in our program. The front squat is the most logical choice due to the amped-up abdominal work it demands. A front squat also hits the quads more than a back squat. In the 2-3 months I have to prep my players, we are going to go heavy. Most of the time, we will be working in either sets of five or three.

“The best way to get the CNS ready to jump? Grab a kettlebell and swing.“

Next on the hip list is hinging exercises for posterior chain development. Particularly for the jumping drills, the hinge exercises are going to be force fed. I love deadlifts for Combine prep. Not only do they strengthen the hips like no other, but their benefits leak into many of the sprinting drills. A player’s ability to produce enormous amounts of force when the foot contacts the ground during sprints is an additional foundation for more and more speed. Relative to body weight, the stronger athlete is going to outperform everyone.

We deadlift heavy, but unlike the squatting variations, we tend to work in higher volumes: 5 to as many as 20 reps per set. Much of the volume in my deadlift protocols revolves around fatigue and CNS stimulation, so we go more by feel than a periodized program. When the pan is hot, we cook.

You may be surprised to learn that I rarely do any direct jump training with my athletes. That’s because they are proficient at kettlebell swings. Ground contacts are a bitch for big athletes, and even the smaller players are nearly 200lb these days. Their legs can only tolerate so many landings before something has got to give. Therefore, the kettlebell swing is my go-to for mimicking all jumping activities.

But you need to swing hard, folks. When I say hard, I mean hard. Maximal tension for every rep. The beauty of the kettlebell swing is that my players can do tons of volume without a huge risk of overtraining. We aim to average between 600-800 swings a week.

We coaches see it all the time with athletes these days – hips so tight you need a crowbar to get them open. My athletes do considerable hip flexor work to open locked-down hips. The hip flexors are the parking brakes of the leg. They inhibit hip extension when they are tight. The fastest way to turn out a lousy jump is to have bound-up hip flexors.

We do a lot of mobility at the beginning of our training sessions to open the hip flexors, and then we complement that work with the heavy posterior work I talked about above. The combination of mobility and posterior work tends to fix any big issues and give our athletes the best chance to overachieve. We will also do considerable hip flexor stretching prior to jumping. This allows the athlete to extend his or her hips with as little anterior tightness interfering as possible.

The Test: My biggest concern with the vert is how my athletes line up to the Vertec unit. Positioning is key. The hardest thing for my athletes to grasp is they need to have their dominant shoulder underneath the sticks. This usually feels like they are too far away from the unit itself, so they want to close the distance. But we need the testing side to be lined up correctly, and the only way to do this is to make sure the arm is directly underneath the sticks.

How We Train For It: I know I am going to drive most of you crazy with this next recommendation, but the vertical jump is just a kettlebell swing. I know. But it’s true. Yes, there is slightly more knee bend in the vertical jump than in the kettlebell swing, but my athletes know this is a hip-hinge dominant movement. If an athlete can swing with power, he or she likely can jump well vertically.

At Cal Poly, we teach a hyper-loading of the hips by mimicking our kettlebell swing groove. The difference is where the feet are. We want the feet directly underneath the hips for the vertical jump. The hands and arms act as the weight for this jump (or swing, if you will). We then have the athlete forcefully enact the slamming down of the hands and arms, which loads the hips. Then they jump.

The Test: The broad jump requires more finesse and athleticism than the vertical jump. Therefore, kettlebell swings won’t be my lone answer, as much as I might want them to be. The NFL has strict standards for this test. Feet need to be stationary for takeoff (no errant stepping of any kind), and the athlete must “stick the landing.” In the old days, there was a bit of gray area on this one, but in the past ten years or so they’ve become more and more demanding. The athlete must land without stepping or putting a hand down. This makes the jump considerably more difficult to execute.

How We Train For It: We teach a rolling variation for the broad jump. The athlete needs to almost rock his weight back into his heels with his hands raising above his head. Once he hits the imaginary wall behind him (that point where if I lean back any further I might have to take a step back), he hinges at the hip and urgently transfers his body weight to his forefoot, using his arms and a little momentum. We want the weight going forward as much as possible before the jump is complete. It’s as if someone is pushing from behind right as the athlete is about to take off.

The flight phase is where we get fancy. The object is to stay in the air as long as possible. Most athletes make the mistake of putting their feet down early. It’s reflexive. The big cue is to bring the earth to your feet, not your feet to the earth. The athlete has to basically land in a full squat. This ensures the absolute longest flight time for the jumper. If I can hear an athlete’s feet during the landing, it’s because he is catching himself. If he can land quietly, I know he is allowing the ground to come to him. Again, the athlete is going to have to stick the landing for the attempt to count.

You only get two attempts at both drills on testing day. Two. So needless to say, you need to be warmed up and your CNS needs to be excited long before you step into the drill. So I would like to end this piece the only way I know how. The best way to get the CNS ready to jump? Grab a kettlebell and swing. Enjoy.

More Ways to Help You Get Air: