Thanks to some promising research over the last few decades, more and more fitness professionals and women are aware of the benefits of exercise during pregnancy. From reduced risk of diabetes and preeclampsia, to easier labors, to healthy and thriving babies, these studies are pretty conclusive. It will be exciting to see what future research has to tell us about how exercise affects mothers and babies on all levels.

Nevertheless, as an athlete, trainer, coach, or pregnant woman, it’s also important to understand what exactly happens during pregnancy. Obviously there’s a lot more going on than an expanding waistline. Although pregnant women can usually still follow along with typical exercise programming, whether that’s weight training, running, or CrossFit, it’s still important to remember that this is a special time in a woman’s life, and training should reflect that.

I’m not saying that to scare any pregnant women away from their kettlebells and pull up bars. On the contrary, I have found that being active during pregnancy can be even more satisfying and effective, as have many of my clients. There’s something special about training during pregnancy and feeling that bond before your baby is even born. Sensing your baby wake up as you stretch after a morning run or fall asleep while you do some kettlebell swings is a singular feeling. As a trainer or coach, helping a pregnant woman train through an entire pregnancy and then watching her finish off those months of training with the marathon that is labor and delivery is humbling and inspiring.

If you are pregnant or training a pregnant client, you will probably find that learning about the physiological effects of pregnancy only confirms what you already know or observe in yourself or your client. Just as it’s encouraging to know the changes the baby is going through at every stage, it’s also exciting to know what’s happening in your body at various stages of pregnancy. It can help you understand why you feel the way you do, and how your body is actually working to support your baby’s growth, even if some of the results are less than pleasant. So what are some of these changes? Let’s start with the cardiovascular effects of pregnancy and discuss heart rate monitoring during the prenatal period.

Women talk a lot about the common first signs of pregnancy, morning sickness being the most infamous one. For me, one of the first tell-tale signs, even before nausea or fatigue, is unexplained breathlessness with relatively low-intensity activity. I feel winded halfway through an easy run, or break out in a sweat after an embarrassingly low number of kettlebell swings. That’s because during pregnancy, a pregnant woman’s blood volume increases by as much as 40 percent. To deal with that increase, the heart volume must also increase by 15 to 20 percent, but that takes some time. As pregnancy goes on, you or your client will probably be able to handle higher intensity exercise much more easily, since the body has adjusted to these changes.

If you’re used to using a heart rate monitor, you’ve probably heard that it’s not the best indicator during pregnancy. That’s because your resting heart rate changes pretty dramatically during pregnancy, due to the increase blood volume. At this point, experts agree that Rate of Perceived Exertion is a better indicator of how hard mom is working.

What Does This Mean for the Exercising Woman?

Clapp’s conclusion, not surprisingly, is that “…women who exercise regularly during pregnancy have more circulatory reserve, which improves their ability to deal with both anticipated (exercise, work) and unanticipated circulatory stress (hemorrhage, trauma, anesthesia, and so forth).” In short, a, strong, fit, and active pregnant woman is a blood-pumping machine. Exercise enhances the mother’s ability to deal with the increases in blood volume, skin blood flow, heart chamber size, and oxygen delivery because it also increases these factors. This is what Clapp describes as an “additive effect” of exercise during pregnancy.

These effects hold true for women who exercised before their pregnancy, as well as those who are taking their pregnancy as an opportunity to become more active. Overweight clients, for example, should be encouraged to exercise during their pregnancy at a proper pace and intensity. A 2010 study found that a regular walking program decreased resting heart rate and helped maintain heart rate variability in overweight pregnant women. “The results suggest that an exercise program could attenuate the increase in blood pressure and the loss of parasympathetic tone associated with pregnancy, especially in overweight women.”

What Does This Mean for the Exercising Baby?

Mom isn’t the only one we have to worry about here – baby is exercising too. What effect, if any, does this have on the developing baby? Will exercise stunt baby’s growth by depriving her of oxygen? A 2003 review of the medical literature concludes: “Controlled prospective studies have demonstrated that moderate prenatal exercise during the second and third trimesters is useful to improve aerobic fitness and maternal-fetal physiological reserve without affecting fetal growth.”

As a matter of fact, an active mom’s heart rate might actually line baby up for lower heart rate and increased heart rate variability. A 2009 study on the effects of aerobic exercise during pregnancy found that “At 36 weeks gestation, during the active fetal state, fetal heart rate was significantly lower in the exercise group (p=<0.0006). Post-hoc comparisons showed significantly increased heart rate variability in the exercise group during the active fetal state at 36 weeks gestation for both time and frequency domain measures.” 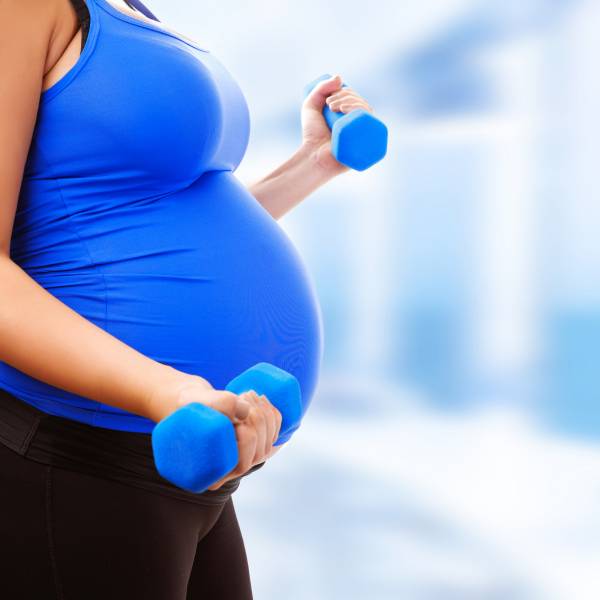 The implications of this phenomenon are particularly important during labor and delivery. A fit baby will be more resilient during the stresses of labor. As Clapp notes, “The first thing we looked at during labor was the babies’ heart rate responses to the contractions of labor. We found evidence that the babies of the women who continued to exercise tolerated the stress of the contractions much better than either the controls or the women who stopped exercise well before term.”

The studies on the cardiovascular effects of pregnancy continue, but so far the research is promising. In short, it seems that a tough mama makes a tough baby. So next time your client seems embarrassed when she’s huffing and puffing after two minutes of brisk walking, remind her that it’s a good sign. She’s doing more work than she probably realizes.

Keep an eye out for future articles detailing the amazing changes that happen during pregnancy. If you’re looking for an exercise program to do during pregnancy, check out our Complete Pregnancy workouts, which are specially designed for pregnant women at all fitness levels.