Dopamine is related to both positive feelings and drug addiction. Its proper synthesis and function in the body are crucial for mental and physical health on numerous levels. Learn how and why.

We’ve learned the basics about the dynamic duo, norepinephrine and epinephrine. We know they play an important role in the fight or flight response, and we also know when they aren’t produced in the right amounts and at the right time, things get ugly. It makes sense, right? If Batman and Robin are getting their signals mixed up and go around beating up innocent bystanders or fail to show up when the bad guys are running amuck, things get out of hand. The same applies to our adrenal health and the hormones involved in the adrenal system.

Today we’re going to learn about dopamine. Dopamine and its proper synthesis and function in the body are crucial for mental and physical health on numerous levels. Dopamine is the precursor to norepinephrine and epinephrine, and also has receptors in the adrenal cortex. With this, dopamine is thus involved in how the adrenal glands work and how our bodies react to stress. Don’t ever forget that demanding workouts are most certainly seen by your body and all of its systems as stress.

Dopamine forms yet another important part of the complex adrenal system and understanding it is key to making sense of the physical and emotional changes that can occur when the adrenal system is compromised. Dopamine is most notably responsible for feelings of pleasure and euphoria. It also plays an important role in locomotion, learning, memory, and other emotions. Considering how many vital functions it is involved in, it’s no great surprise that dysregulation of dopamine is linked to diseases like schizophrenia, ADHD, obsessive-compulsive disorder, Parkinson’s, Tourette syndrome, restless leg syndrome, and possibly autism. Obviously, we won’t cover all of these problems in this article, but I do want to cover the basics and outline the importance of dopamine’s role.

First, let’s talk about the basics of dopamine. It is a catecholamine and is considered both a hormone and a neurotransmitter, basically a chemical messenger between nerve cells. It is produced in the brain in two places: the substantia nigra and the ventral tegmental area. A small amount is also produced in the adrenal medulla and released in times of stress. The substantia nigra is associated with movement of the body and subsequently the tremors, akinesias (loss of voluntary movement), and rigidity of Parkinson’s disease are related to the degradation of this part of the brain. 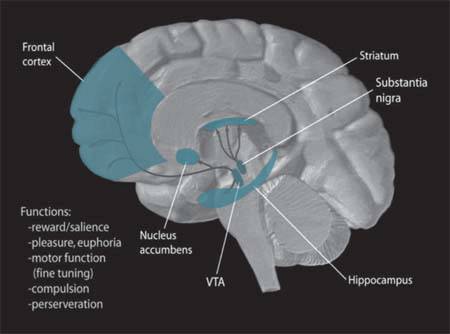 Drugs like cocaine and other stimulants hit those reward centers hard and addiction is likely. There is research that also links people who are more sensitive to the dopamine-related reward system to reward-seeking behavior and extroverted personality types. Keep this in mind if you’re ever feeling an overwhelming need to workout, even if you know you shouldn’t. Recovering from an injury, being legitimately ill, or being validly over-trained are scenarios that come to mind.

Back to the basics of dopamine: Dopamine acts as a hormone specifically in the hypothalamus. When dopamine is released it inhibits the hypothalamus from releasing prolactin. Prolactin stimulates lactation or milk production and is also involved in sexual satisfactions. Dopamine is related to sexual arousal. Dopamine is high before sex and then drops once orgasm is achieved. 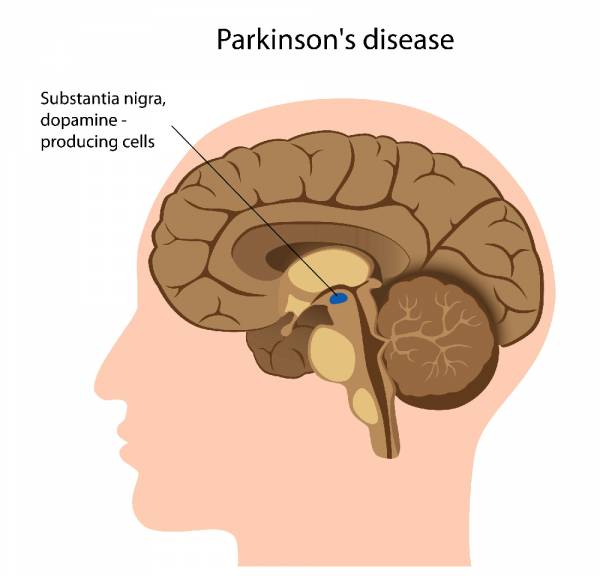 This wonder hormone/neurotransmitter is available as a drug and is used to increase heart rate and blood pressure. Before you get carried away with disease treatment, be aware that dopamine cannot cross the blood brain barrier so it’s useless to take it to treat Parkinson’s or any other disease related to a shortage in dopamine. L-DOPA on the other hand, which you may remember from previous articles, is a precursor in the formation of dopamine, norepinephrine, and epinephrine (reread that line for our next paragraph), can cross the blood brain barrier, and is prescribed to treat several diseases and symptoms.

Now that we’ve discussed what dopamine is and the super important role it plays in the body, let’s talk about how we produce it. Recall that line above that I told you to reread? This is where it comes into play. Just as with norepinephrine and epinephrine, the amino acids L-phenylalanine, L-tyrosine, and L-DOPA are crucial for dopamine to be synthesized in the body. Here’s the breakdown of this whole synthesis pathway:

Whew. Keep in mind if you are missing out on any of the amino acids required for this biosynthesis, the resulting hormones and neurotransmitters will also have deficiencies. Going back to our Batman and Robin theme, you need power, a spotlight, and a light bulb to throw up the bat signal in order to get Batman and Robin on scene. With dopamine being as important as it is on it’s own, and also being a precursor to the norepinephrine/epinephrine, you can be sure these hormones and keeping them in balance is important to adrenal and overall health.

Now, let’s review a little about dopamine transport and receptors, or in simpler terms, how dopamine actually get from point A to B to so it can “do work.” Dopamine is released from presynaptic vesicles, given the correct stimulus, and then binds to post-synaptic receptors. There are several different types of dopamine receptors including: D1, D2, D3, D4, and D5. These receptors are either excitatory or inhibitory if stimulated, although the end result is not always so straightforward. 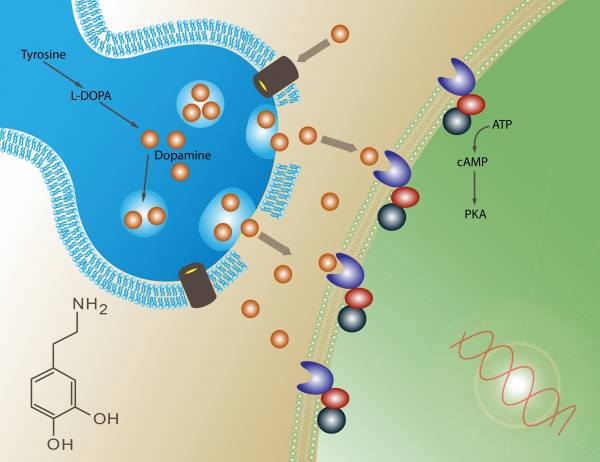 Dopamine is taken up by something called DAT, then undergoes enzymatic breakdown by MAO into DOPAC, or is repackaged into the presynaptic vesicle and recycled. Cocaine, amphetamines, and methamphetamines inhibit DAT from up-taking dopamine so that dopamine continues to stimulate the receptors causing euphoria and hyperactivity.

So kids, where does this all put us? Your adrenal system, including all the hormones and neurotransmitters that go with it, is a very complex system that has the ability to greatly impact every other system in your body. Because of the massive changes it can cause in other systems, any major issues with your adrenal system can affect virtually any function in the body (take a peek back at paragraph two). This is something that extends past just having a bad workout or your body composition suffering a bit. We’re talking about the possibility of severe mental illness or life-altering neuromuscular diseases. Keep this in mind as we continue to learn more about the pieces and parts of our bodies that make up our adrenal system. As we also learn that seeking balance and ways to nurture our bodies and prevent stress are key in long-term health and physical and mental well being.

Photos 1, 3, and 4 courtesy of Shutterstock.