No one ever expects a death to occur during physical training or an athletic contest. When it does occur, not only is it distressful to family members, teammates, and coaches, it leaves everyone scratching their heads, thinking “why?” and “could this have been prevented?”

In recent years we have seen a slight uptick of deaths due to a conditioned called sickle cell trait (SCT). Not to be confused with sickle cell anemia (a disease formed by two abnormal sickle hemoglobin genes), SCT is genetically acquired, but will not result in a disease. In SCT a person may inherit one gene for sickle hemoglobin and one for normal hemoglobin. During extreme exertion, the sickle hemoglobin can change the shape of red blood cells from round to a quarter-moon “sickle” shape.

Here is where SCT can be dangerous: the sickle-shaped cells can “jam up” in the blood vessels, blocking blood flow to the muscles, kidneys, and other organs. This can lead to tissue death, organ failure, and rhabdomyolysis, the rapid breakdown of muscle cells that causes the release myoglobin and other cellular enzymes into the bloodstream. The harder and faster the person’s effort, the quicker and greater the chance sickling will occur.

The U.S. Armed Forces found that military recruits who possessed the SCT were thirty times more likely to die as compared to other recruits. They also found that those who have SCT are two hundred times more likely to experience exertional rhabdomyolysis. Most of the deaths occurred during basic training and fitness testing. They concluded the deaths were a result of intense conditioning that was well beyond the level the individuals were accustomed to.

Regarding athletes, exertional sickling has killed at least fifteen football players in the past forty years. It has killed or nearly killed several college or high school basketball players while training (two were females), usually during court sprints, track laps, or a long training run (why it can also occur in distance racing). Two 12-year-old youth training for football have died in the past seven years alone from sickling. Of 136 sudden, non-traumatic sports deaths in high school and college athletes over the past decade, seven (5%) were attributed to exertional sickling.

Compounding the sickling can be exertion in the heat and/or high altitude, being dehydrated, and being asthmatic. A high percentage of sickling deaths have occurred in football players during the hot summer months of off-season conditioning. Regarding altitude, it was well publicized recently that Pittsburgh SteelersSafety Ryan Clark was not allowed to travel with the team to Denver due to his SCT. 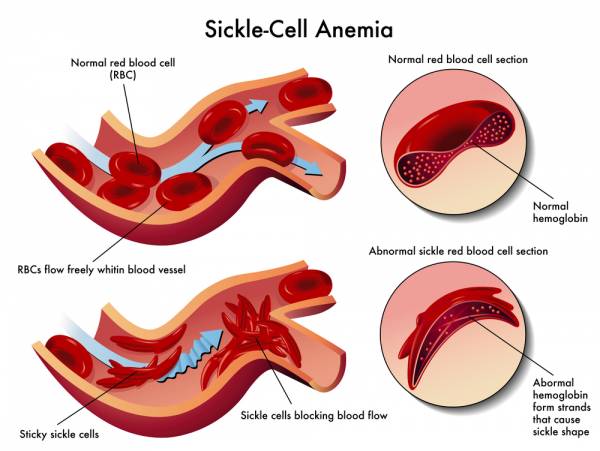 Who can get the sickle cell trait?

The sickle cell gene originated as a natural defense against the disease malaria in sub-Saharan Africa. Consequently, approximately 8% of African Americans have SCT. Additionally, those with a Mediterranean, Middle Eastern, Indian, Caribbean, and South and Central American ancestry are also at risk. Caucasians can also obtain it, but the odds range from 1 in 2,000 to 1 in 10,000.

How is it diagnosed?

All fifty states screen at birth. This provides a base marker. However, it is recommended a pre-participation physical examination be performed in all athletes via a blood test. If SCT is found, notification should be given to the parents, healthcare provider, and those responsible for determining the medical eligibility for participating in sports.

How do you identify a sickling collapse?

With a sickling collapse:

This is the norm, but sickling can also manifest differently. Some sicklers are stoic, and simply state they cannot continue the activity. Given ample rest time, the sickle red cells regain oxygen in the lungs and most then revert to a normal shape. The sickler then feels better and is able to them continue. This is a desirable situation.

In the event of a sickling event, treat it as a medical emergency by doing the following:

Simple precautions can be used so that no athlete is ever disqualified from training and competing. The following guidelines should be followed:

By using proper screening, taking the required precautions, and using sensible training plans, it will allow those with the sickle cell trait to train and compete without issue.