Regardless of the exercise, they are all used in a practical manner. Nothing is fancy or flamboyant.

Quite the opposite, the gymnasiums of Akhara are of pure minimalist design, with earthen floors, no fan or air conditioning units, rarely any mirrors, no sound systems.

If you are lucky, there is a water pump for your rehydration needs. The equipment is equally spartan, constructed from clay, stone, bamboo poles, wood, and iron. This is fitness stripped to its most bare and naked form.

Rarely will you hear screams for “One more rep!” or the clanking and clashing of heavy iron. Egos are left at the door, for the Akhara is also a temple to the Hindu god of strength, Hanuman.

This monkey deity has a shrine at each gymnasium, and before and after training the wrestlers will pay their respects by offering simple prayers. As such, each Akhara is by definition a holy place and is treated as such by all who enter.

The exercises listed here are what I would consider the core exercises of the Indian wrestlers’ workouts.

Not all are necessarily performed in a single workout by any single wrestler. They are generally dependent upon how the trainee feels or wants to accomplish, or dictated by what the Akhara guru (the chief of the gymnasium and usually an ex-wrestling champion) feels they should do.

The Gada is a roughly constructed strength tool comprised of clay, cement, or stone with a bamboo pole over a meter long inserted into its center.

This gives it the appearance of a giant lollipop. The Gada was used as a weapon for many centuries in India. To increase a warrior’s battle prowess it was employed as a training tool. The main movement employed is the Rumali or Head Move. 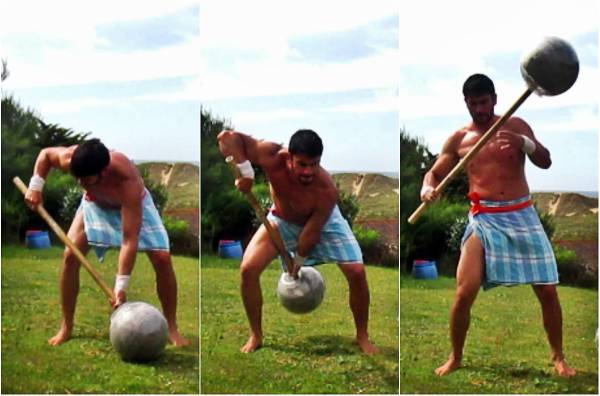 The Jori are clubs are always used as a pair, and again their heritage comes from warfare.

Many parallels have been drawn with Iranian clubs, or Meels, as the Persian invaded north India many centuries ago and thus there was an exchange of cultures. Today the Jori has its own separate identity. It takes great skill and coordination to wield Jori effectively, and it is an exhilarating experience once understood.

From the ready position, the Jori is swung over and away from the shoulder in a large semi-circular arc over one shoulder.

The Jori that is in motion is pulled cleanly over the shoulder to rest on the upper chest, the arm pulling it down and away. At the point of contact the second club will be swung, replicating the movement of the first.

The movement is done for repetitions. It is a particularly good exercise for the grip, shoulder girdle, back, chest, and torso.

It is a full-body exercise that requires timing and a high level of concentration. It also makes you feel like a true warrior!

The dumbbell swing evolved in the last couple of centuries when the British Empire ruled in India.

A cross-pollination of physical culture took place. The British saw values in the club training of the Indian wrestlers. The British modified it to suit their own needs and took it back to their country, where it widely became known as Indian club swinging. The modified version utilized smaller clubs in more of an intricate gymnastic fashion.

Meanwhile, the Indian wrestlers adopted the dumbbell to fit in with their current training paradigm.

The circular dumbbell swing, or cast, mirrors the Jori swing. Whereas the Jori is swung from the rear to the front, the dumbbells are swung from the front to the back. This makes them highly complementary to each other, in keeping with the holistic approach taken in Indian physical culture. 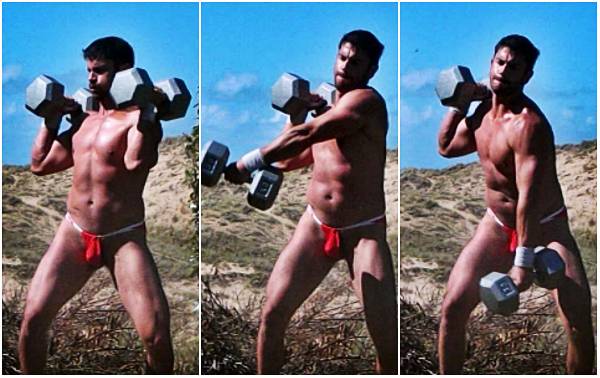 Pull the dumbbell in quickly as it reaches the opposite side back to the clean position, dipping the knees to absorb the force. Repeat with the opposite dumbbell for repetitions.

This exercise is great for the grip and really hammers the upper back. It can get draining very quickly, especially when the weights are increased.

Above all, have fun with these exercises! In my next article I will talk about the Dand and Bethak as well as how to create an all Indian exercise program. May the power be with you!

Marcus Quijas is a holistic trainer focusing not only on physical strength, endurance and flexibility, but also on internal mental and spiritual self empowerment.

After eleven years in the British military and three years working as a private security expert in high risk areas, Marcus decided to take the plunge and begin a career in the fitness industry. His year of extensive travel have allowed him to come into contact with many different training modalities with one goal alwaysin mind - finding excellence. The best information cannot be bought or learnt in a weekend but must be found on one's own path for the truth through hard work, commitment, and a almost obsessive drive to learn.

Taking the path least travelled has allowed Marcus to gain a unique insight into the world of the physical preparation of Indian Wrestlers,as well as knowledge of internal martial arts from China, Taiwan, and Thailand. He enjoys combining them with proven tried and tested fitness modalities. Marcus is constantly experimenting, and above all having fun with the process.

Marcus can be found on Facebook,and is based in Cornwall in the deep south of the U.K.