Everybody is excited about interval training, but what do you do during the rest? Is there a BEST way to rest? What if resting correctly could help you build muscle AND cardiovascular endurance?

What would you say if I told you being fitter cardiovascularly could mean gaining more muscle?

But new research says that is not necessarily so.

Traditionally, research on resistance training for strength and power has looked at maximizing the mechanical stimuli. While some research has been conducted on the length of rest periods to optimize this, very little has been done on exactly how you should rest.

While the normal tendency in the gym is to grind out your reps then flop to the ground and wait until you felt ready to go again, recently some Aussies made some big discoveries about instituting active recovery during the rest periods.

…the net result could be a session with increased mechanical, hormonal, neural, and metabolic outputs and hence the opportunity for improved strength and power adaptation. For this to occur, the inter-set rest periods need to be viewed not as a period of passive rest but as recovery periods.1

Typically, in hypertrophy training, muscles acquire higher amounts of blood lactate than they do during maximal strength training. With regular rest periods between sixty and ninety seconds the eventual result would be decreased force production, leading to less muscle recruitment.

However, the levels of lactic acid in the blood stream can be lowered or buffered by the presence of oxygen, which suggests that having a hearty aerobic system could assist with building muscle.

Studies showed light aerobic activity, such as easy stationary cycling, increased exercise performance when used between sets of parallel squats by as much as an extra five reps per set.

This same effect was seen even when used for an upper body lift like the bench press:

2 minutes on a bicycle ergometer at 45% V̇O2 max during the inter-set rest period of 4 sets of maximum repetition bench presses at 65% 1RM was found to be more effective in clearing lactate (10%) and producing greater (10%) isometric force as compared with passive rest.2 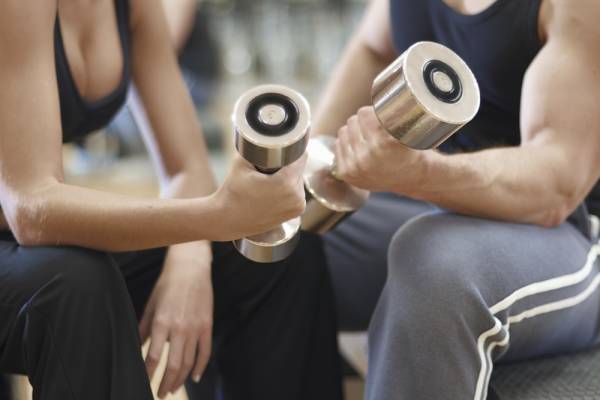 If you stand, sit, or lie down gasping for breath following a hard set, your heart has to work unreasonably hard. You are still in severe oxygen debt, and moving your muscles – especially in the legs, by jogging, shadow boxing, even walking – pushes the blood back to the heart. Stop moving and your ticker has to work extra hard – too hard for some. Don’t come to a complete stop until your heart rate and breathing are halfway down to normal.

As an added benefit research has also shown the use of inter-set aerobic recovery can have a positive effect on muscle temperature. The short version is that a warm muscle is more compliant, more easily stretched and loaded, and can produce greater force. So in colder climes simply adding in some active recovery is a great way to keep performance high rather than cooling down between sets.

Obviously some experimentation will be required to get this right for you. If you work too hard between sets you’ll tire yourself out and have little energy recovered for the next work set. However, some easy movement, light cycling, even walking, could do wonders to boost recovery and allow you to attack more muscle fibres in your next set!