A new research project from Aalborg University in Denmark shows Virtual Reality (VR) can get the elderly in nursing homes to be happier about exercising. It seems that a big problem in nursing homes is that the denizens don’t move about enough. In Denmark, all nursing home provide access to fitness facilities and physical therapists but that hasn’t done much to get the blood pumping through the hearts of the residents.

A new doctorate research project1 from Aalborg set out to show how new technologies, such as VR, maybe just what the elderly need to get excited about exercise. Researcher Jon Ram Bruun-Pedersen, of the Multisensory Experience Lab in the Department of Architecture, Design and Media Technology, wanted to make exercise for the elderly a digital experience.

“All too often the elderly end up sitting and looking at a wall or staring passively into a television. As a rule they’re usually not particularly motivated to exercise, partly because getting moving again after a long period of inactivity can cause pain, and partly because it’s not particularly interesting to sit and look at a wall while you bike,” said Bruun-Pedersen.

In conjunction with physical therapists at the Copenhagen nursing home Akaciegården, Bruun-Pedersen conducted a study where large TV screens were set up in front of the exercise bikes in the activity room. While they biked, they rode through various virtual landscapes on the TV screen. The 21 elderly residents who participated in the study could choose among things like riding on a park road between green lawns, lakes, flowers and butterflies; through a snowy pine forest; or on a mountain side. The bikes were linked with the screens so that the speed the subjects biked with reflected their speed through the landscape.

According to Bruun-Pedersen, participants really liked the experience, “They really lived it and felt as if they had to pedal extra hard to get up the hill on the screen — even though they really didn’t feel higher resistance on the bike.”

In the next part of the study, Jon Ram Bruun-Pedersen made the experience more intense. He equipped the elderly subjects with Virtual Reality goggles – a sort of diving mask with small screens in front of the eyes that makes you feel like you’re being led into another world because you can look around the landscape. When you turn your head, it feels like you’re looking around in reality – you can see out over the edge of the mountain, see the birds fly in the sky above and move freely around between buildings, plants and trees.

The illusion is very true to life, and the elderly subjects vividly experienced being out in the great outdoors — even though they were still on an exercise bike in the physical therapy room at the nursing home. 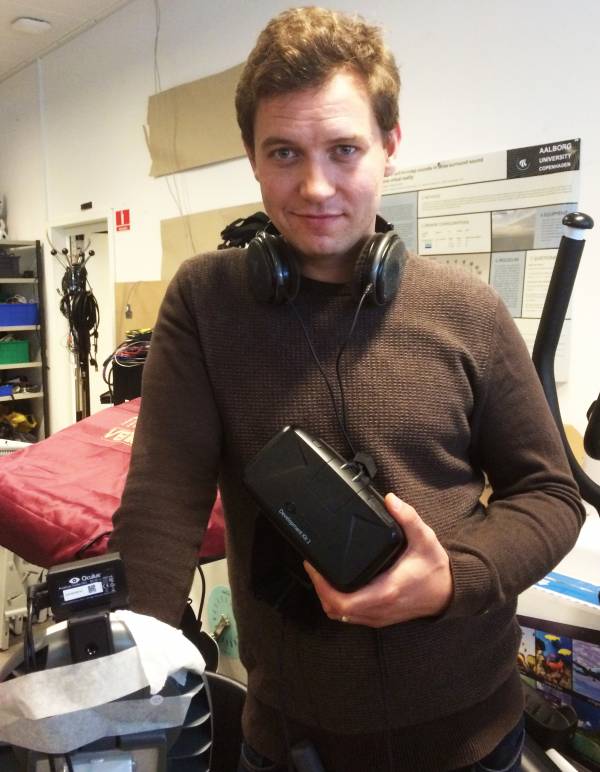 In interviews with study participants the desire to take up the exercise bike had increased. Bruun-Pedersen believes the experience of being outside of the nursing home, albeit in a virtual world, played a role in the success of the project. Beyond exercise, Bruun-Pedersen wants to use VR to take the elderly on worldly experiences that are almost always out of reach to them, like visiting the world’s great attractions. Both the residents at the nursing home and a number of their relatives have also requested that the technology become a fixture in the gym.