Type 2 diabetes rates are rising, both in the United States and globally. Characterized by insulin resistance and chronic hyperglycemia, type 2 diabetes leads to both neural and metabolic dysfunction and is a significant risk factor for cardiovascular disease. In lay terms, blood sugar levels are chronically elevated in type 2 diabetics, and insulin is progressively less effective in bringing those levels down. Ultimately, pancreatic tissues can suffer permanent damage. Blood sugar typically rises after a meal, and some studies suggest that these post-prandial hyperglycemic peaks are more likely to lead to vascular complications than elevated fasting glucose levels.

Once glucose has been released into the blood stream, the body can get rid of it through uptake by the muscles – where it is ultimately used – or by storing it. Glucose storage is mediated by insulin; by definition this pathway is impaired in type 2 diabetes. Aerobic exercise has been shown to increase muscle glucose uptake and improve insulin sensitivity, and is typically included in diabetes management plans. The paper discussed here examines the effect of resistance exercise on blood sugar levels.

Accordingly, this study assigned subjects to either a low or a moderate intensity protocol. Both protocols consisted of a circuit of 3 sets of 30 reps each of six different exercises: leg extension, bench press, leg press, lat pull down, leg curl, and seated row. Participants rested 15-20 seconds between exercises, and two minutes between sets. Weights were set at 23% of 1RM for the low intensity group, and 43% of 1 RM for the moderate intensity group. Blood sugar, perceived exertion, and other parameters were measured between sets and at 15-minute intervals through a two-hour post-exercise rest period. Subjects ate a 285-calorie moderate-glycemic index breakfast two hours before the test. The test subjects, both diabetic and not, were overweight middle-aged men with previous resistance exercise experience. 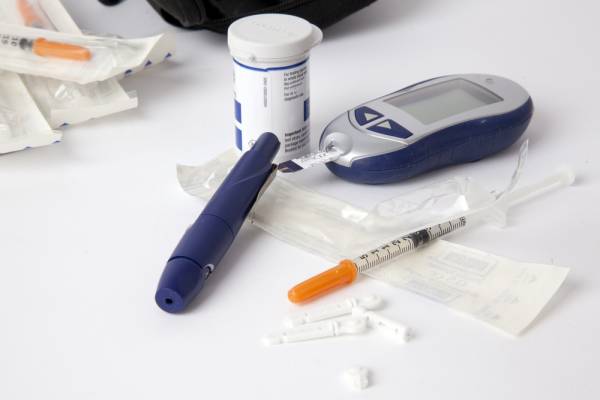 As would be expected, blood sugar levels in the non-diabetic subjects fell initially, then rose after exercise, then leveled off again. In subjects with type 2 diabetes, both the low and moderate intensity circuits reduced blood glucose concentrations. However, the low intensity circuit produced lower glucose levels with less metabolic stress. This finding is particularly relevant to overweight, often untrained individuals who are just beginning a diabetes management program. Even a single bout of low intensity resistance exercise offers clear benefits for blood sugar management. As the individual progresses, intensity can be increased.

For coaches and athletes, these results suggest that a resistance-based or mixed aerobic and resistance program can help type 2 diabetics manage their symptoms more effectively. Of course, consulting with a medical professional is always wise when beginning an exercise program, particularly when the individual has known health issues.