Why is it that some people prefer salty snacks to sweet treats, or they can’t get enough spicy or sour foods? Some people love a nice, dark, bitter coffee, while others have to have coffee rich and sweet. The expression “there’s no accounting for taste” can be taken to mean “there’s no way to explain why some people prefer certain foods over others.”

Or is there? According to a new study, genetics may be the reason that you have a craving for sweet, salty, sour, bitter, or spicy foods.

A predoctoral researcher from the Universidad Autonoma de Madrid has done some fascinating research into the role genetics play on food preferences. He discovered that certain gene variants affect the way our brains work, in this case, the way we perceive and desire different flavors of food.

To test the hypothesis, over 800 European men and women were analyzed. It was discovered that certain genes affected the participants’ food choices. For example, an oxytocin receptor gene led to an increased intake of chocolate, which of course contributed to a higher waist size. Another obesity-related gene decreased the desire for fiber and vegetable intake. Other genes affected the participants’ desires for fatty and salty foods.

What makes this study so useful is that it could help to explain our food preferences. If there was a genetic reason why you preferred sweet, salty, sour, bitter, or spicy foods, you would be better able to understand why you have cravings for certain things. Understanding that your body is genetically inclined to prefer some foods over others can help you to take steps to avoid eating the wrong foods. 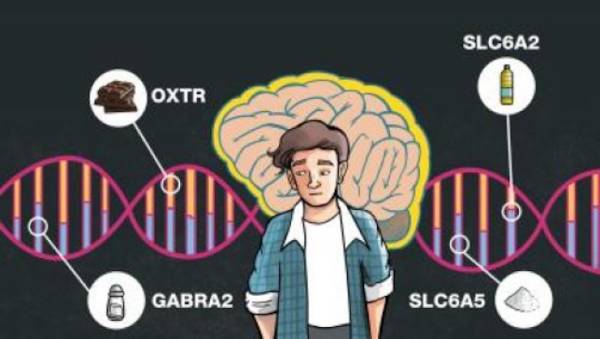 Researchers found that variations in certain genes play a significant role in a person’s food choices and dietary habits. For example, higher chocolate intake and a larger waist size was associated with certain forms of the oxytocin receptor gene, and an obesity-associated gene played a role in vegetable and fiber intake. Other genes were involved in salt and fat intake. (Source: Adriano Kitani)

This study sheds some fascinating light on eating preferences, potentially enabling researchers to personalize diets according to the genetic makeup of participants. Imagine if there was a way to turn off the genes that make us crave sweets and fatty food, and instead switch on the genes that make us want veggies and fiber-rich food. Dieting and healthy eating would become so much easier as a result.

For now, it’s enough to know that your genes play a role in your eating habits. Your preferences for certain foods are the result of your genetic makeup, so you can be prepared to fight your instincts and cravings in order to stay on a healthy, clean diet.

1. Experimental Biology 2017. “Could genetics influence what we like to eat? Understanding the roles of genes in eating behaviors and food preferences could lead to personalized diets that are easier to follow.” ScienceDaily. ScienceDaily, 24 April 2017.